Are you looking for a Windows 10 Backup Not Working Error solution? This guide provides detailed information on what it is and how to overcome it!

Does your backup on Windows 10 not work? If this is the case, your backed-up data must be rendered inaccessible by some problem that is occurring in the background. Several problems might have caused this error, and if it occurs, you may get a pop-up notice that says, "Windows backup is not functioning."

What gives if you try to view the backup but receive an error message saying that your Windows 10 backup isn't functioning? Alternately, you might run across an error that states  file history Windows 10 does not recognize this disk. This article will serve as your guide to resolving the issue of Windows not backing up properly; specifically, Windows 10 Backup Not Working properly. 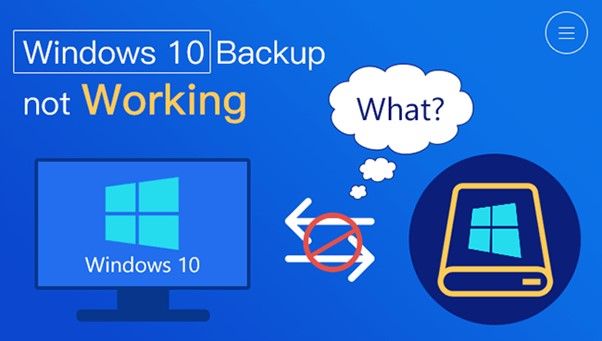 The Windows 10 Backup failed problem happens commonly, for example, Windows 10 Backup sometimes do not back up all kinds of data files or Windows 10 backup 0 bytes error can be seen on the screen. In another scenario, errors such as Windows 10 won't back up to an external drive and Windows Backup did not finish correctly are also common.

This problem might have several potential origins. This issue may occur for various reasons, including but not limited to the following: the Startup Type is not set to Automatic; the hdd has not been formatted, the data are corrupted, etc. Read on and discover answers here.

You could discover that Windows 10 File History is not functioning properly when you try to use it to back up certain files or folders. In the next part, we will walk you through two different scenarios in which this can happen.

The data and operating system files on your computer may be backed up to a place of your choosing using the file history feature, available in Windows 10 and Windows 8. In the unfortunate event that anything goes wrong, you may use these backup files to roll back the operating system on your device to the point where it was before you performed the backup.

After the update to Windows 10, several customers have claimed that the Windows backup feature on their device is inoperable, even though they had configured it to create backups of Windows at certain intervals. One of these errors is called "File History," Several customers have claimed that Windows 10's file history feature does not operate on their devices.

The primary cause of this problem seems to be a change in settings introduced with a recent Windows 10. The File History function in Windows 10 is automatically configured to the Off position, meaning backups will not be automatically stored by default. This behavior is because the default setting for the feature is Off.

In Windows 10, you will need to manually make changes to the settings to activate the File History feature and begin creating automatic backup of your file history. You may attempt to fix this problem by turning off File History and then turning it back on again to force a refresh. This could help. In addition, you might try taking the folder from the list of things to include and then adding it back in.

If the problem is still present, you should examine the Event logs for any issues after clicking the Advanced setting button on the page that displays the file history. 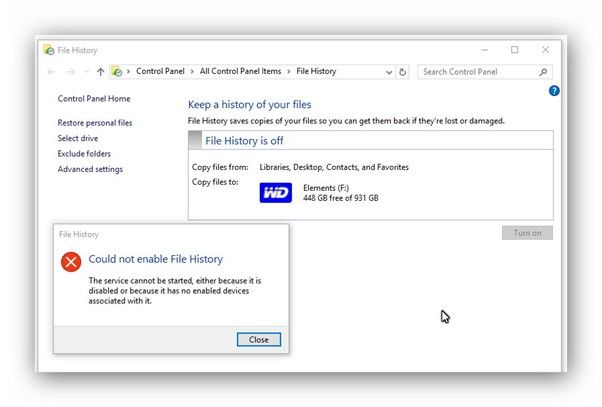 1. The first scenario is a blank backup and restore.

2. The second scenario is the inaccessibility of the Backup and Restore functions

Windows Backup may fail with the warning "The backup did not finish successfully" if you attempt to generate a one-time backup or a scheduled backup using Backup and Restore (Windows 7). On Windows 10, you can also get the message "the most recent backup was unable to complete properly."

You often run into this problem when working with an external hard disk drive or a USB stick. The following are some of the potential causes for why you may see the Backup and Restore not working issue: 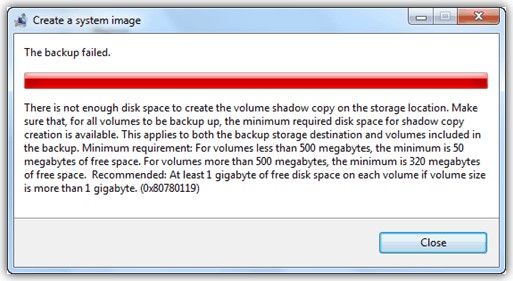 We recommend using a tool that will back up the state, files, and data of a computer system and duplicate it so that it can be used as a backup or substitute if the primary system data is corrupted, deleted, or lost. If you are having problems with backups in Windows 10, you should use this tool.

If you need to replace your hard disk, clone it. You may also choose whether to restore data to the original location or a second location and replace existing files. This tool's Smart Backup function lets you schedule file monitoring. When changes are identified in monitored files, the software creates a backup, so you never lose your latest work.

Is there a problem with Windows 10's backup? Suppose you are worried by the problem of Windows 10 file backup not functioning or Windows 10 system image recovery and backup failing. In that case, you should attempt to repair these difficulties based on real scenarios if you want to eliminate the problem.

The Easeus Todo Backup might greatly assist you in preventing future failures of the Windows 10 Backup process while you are attempting to back up your computer data or system. Just download the Trial Edition to get started for free.

1. Why does my Windows 10 backup keep failing?

Suppose the backup for your Windows 11/10 computer did not finish properly and continues to fail to finish. In that case, one of the following recommendations is certain to assist you: Remove or reorganize the files in the WindowsImageBackup folder. Delete the partitions for the EFI System and Recovery. Perform a disk check to look for defects or faulty sectors.

Time depends on the backup you performed, the amount of data needed to be copied, and the destination disk the backup was placed on. Large data backups might take many days to complete if the destination device is connected through a sluggish connection (such as USB1). If compression is turned on, the backup will go more slowly. The more information has to be backed up, the longer the process will take.

3. Can I use my computer while it is backing up?

You are recommended not to make any changes to the Windows backup at any time. On the other hand, if you want to use your computer while producing a backup, you should only do so for ongoing tasks requiring less memory and less time to complete the processing. These activities may involve typing a paper, listening to music, or doing something else entirely.