[Backup Question] How Often Should I Create A System Image

A system image is the most effective way to create a backup of your PC. Not only does it keep the data intact, but it also helps you to recover from any significant data crash quickly. In this post, we share how often you should create system images, including a How-To guide.

What Is A System Image

It is essential to note that you shouldn't replace your usual backup process with a system image. Both have significance.

Moreover, system images have different file formats depending on the program you created. For instance, Windows system image files usually have .xml or .vhd extensions. It would help if you took care to create a system image and restore data using a standard program to avoid errors.

There are advantages to creating and maintaining system images.

Be it any operating system you have, each has varied backup methods. So, if you are wondering how often you should create a system Image, we have covered you all!

How Often Should I Create a System Image

There are no constraints about when you can create a system image and at what frequency.

Usual system image creation frequency: Most create a system image on your Windows OS every three months. All the hard disk data during the period and file modifications will be available in the new system image.

Creating Backup on System Image: If you back up using a system image, you can schedule it daily or weekly. When doing so, ensure to delete the previous month's system images. Otherwise, it will consume too much storage on your device. But you should have at least two prior system images if any problem occurs regarding the hard drive or system image creation.

This topic summarizes system state backup and how to use it on Server computers. And more, we collected other solutions to do the system image backup on Windows 10.

How to Create a System Image on Windows Computer

Using the EaseUS Todo Backup Home is the most reliable and effective method for users. The software lets you create a system image for a full-offline backup.

Here's why EaseUS Todo Backup is the most suitable system image creation tool:

Here are steps you can follow to create a system image via EaseUS Todo Backup:

Windows Backup and Restore and EaseUS Todo Backup can help users create system images. They both work; however, the downside with Windows is that it is limited in functionality and complex to use, and some users have found it unreliable.

Following are the steps to create a system image using Windows Backup and Restore:

Step 2. Look for the "Backup & Restore" option in the Control Panel and click to open it.

Step 3.  On the left section, click on "Create a System Image". 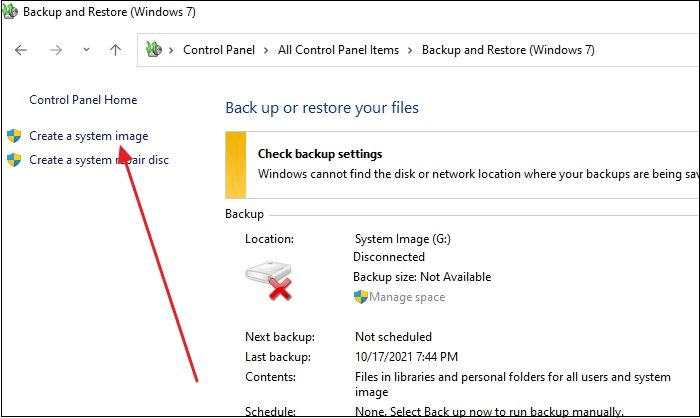 Step 4. Navigate to On a Hard Disk Option.

Step 5. A drop-down menu will appear. Choose the one you find suitable and press the "Next" button.

Step 6. Now, you also select any other external drive if you want to Click on "Next".

You will be prompted to head over to create a system repair disk, but you should click on No.

FAQs About Creating a System Image

If you still have questions about how often I should create a system image, turn to the FAQs and find answers below.

1. When should you create a system image?

System Image is used to retrieve your system as you had configured it. It includes all the settings, personalization, system app, personal files, drivers, software, etc. Like when you cannot boot into Windows, you can fix it and later use the image to restore your computer as it was initially.

2. Is system image better than backup?

In terms of storage and accessibility, backups are better than system images. But system images create a better clone of your computer. Backup stores all your files, but system images save all your system files, personal files, apps, settings, and personalization.

3. Does creating a system image wipe the drive?

No, creating a system image would not wipe off your data. It will copy all the data from your hard drive as a snapshot that you can store on an external drive.