Are you trying to transfer your current Windows system to a new computer? Following this page, you'll learn how to create and restore Windows 10/8/7 system images to a different computer with ease.

Are you looking for a complete guide to backup Windows 10 and restore system image to different computers? On this page, you'll learn how to create a system image in Windows 10/8/7 and restore it to a new computer without reinstallation.

So how to do so? Follow the complete guide here for help:

Can a Windows System Image Be Used on Another Computer

Is there any effective way to restore a system image to another computer just as easy as to restore a file image to a dissimilar computer? If a person is savvy about computers, he would definitely say "NO".

The reason is that the configuration settings on another computer may differ from your current PC. Also, the operating system requires the computer to include certain drivers, without which the computer won't boot successfully.

So can you create and restore a system image to a dissimilar computer? Yes! With the help of reliable Windows backup software, transferring OS to a new computer is possible.

Preparations: Get Ready for System Transfer to Different PC

You may want to know what exactly you'll need to get things ready for system migration to another different computer. Here below is a list for you to know and prepare for this task:

Note that the listed tips are three key points that decide whether you can successfully create and restore a system image to a new computer. Follow to make everything ready now:

The motherboard of your new computer must support the same boot mode as your source computer. You can follow to check the boot modes on both of your PCs:

Restart PC and hold F2/F8/Del to Enter BIOS > Go to the Boot Menu and Check the Boot Mode: Legacy or UEFI.

In a word, the BIOS boot mode in the new computer should be the same as your current PC:

IMPORTANT: If your computer is too old and it doesn't support the UEFI boot mode, you'll need to switch to a new computer. Most new computers support both Legacy and UEFI boot modes and you don't need to worry about it.

Professional system backup software - EaseUS Todo Backup can help. Its System Transfer feature can do the system backup and transfer task, making the Windows system bootable on the new computer by transferring necessary drivers together.

The capacity of the external hard drive must be bigger than the system C drive.

After making all things ready, you are good to go and follow the tutorial below to start creating and restoring system image like Windows 10 to your new computer now.

Tutorial: How to Create and Restore System Image to a Different Computer

Applies to: Transfer Windows 10/8/7, even Windows XP/Vista, to a new computer without reinstallation.

This part answers the question of "How do I create system image in Windows 10" and "How to restore a Windows 10 backup to another computer". Follow the tutorial guide here to make your current Windows system bootable on a different computer:

In the following, we'll take Windows 10 as an example to show you the complete process of backing up and transferring the system to another computer.  Let's start!

As the system transferring process will rewrite everything on the system C drive, which will certainly cause data loss.

Therefore, if you have important data saved on your target computer system drive, we suggest you copy and save them to an external storage device as a backup in advance.

#2. Create and Restore (Windows 10) System Image to a New Computer

Now, you can apply EaseUS Todo Backup to create a bootable disk, create a system image, and restore the system image to another computer without limits. 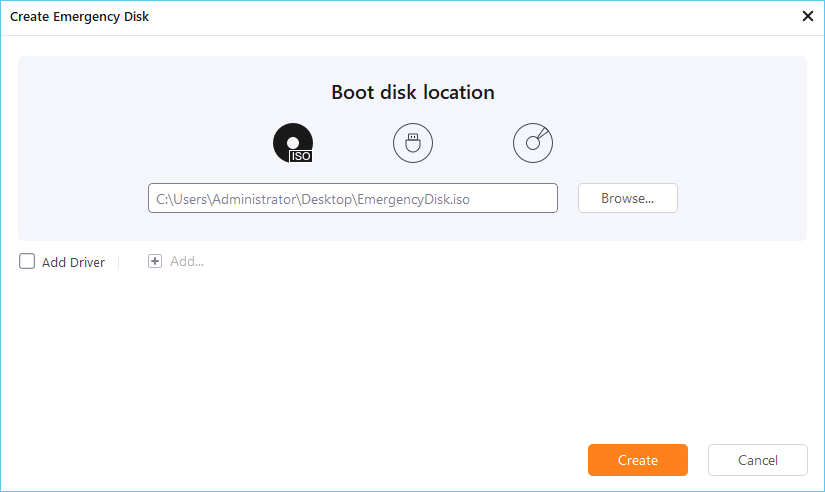 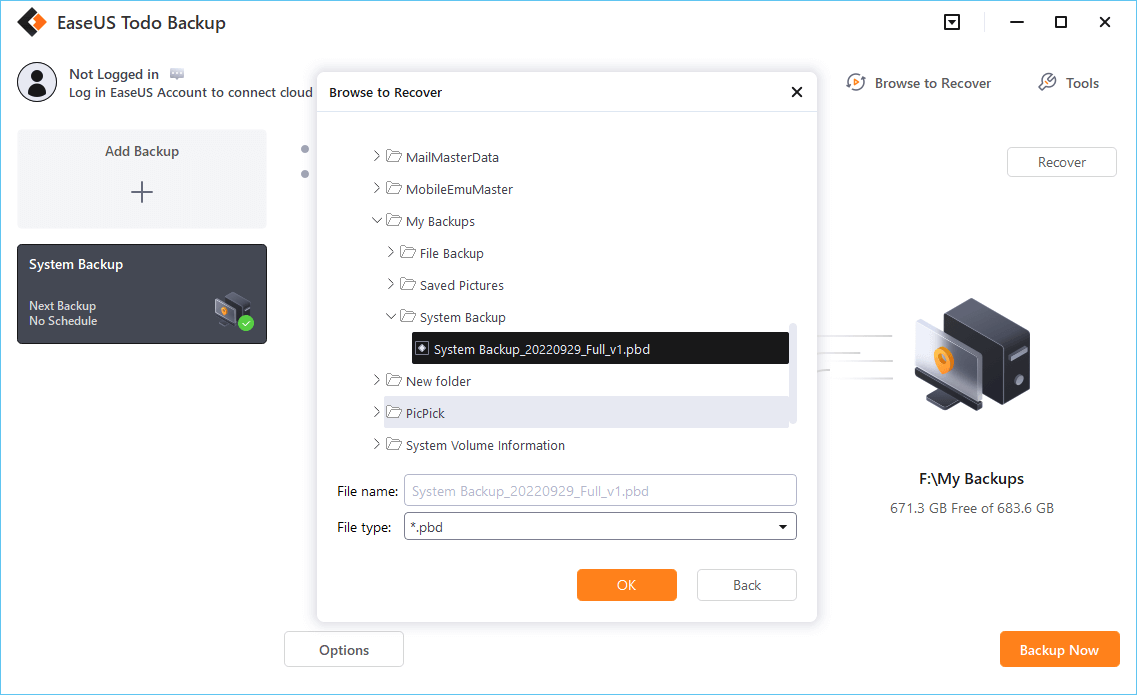 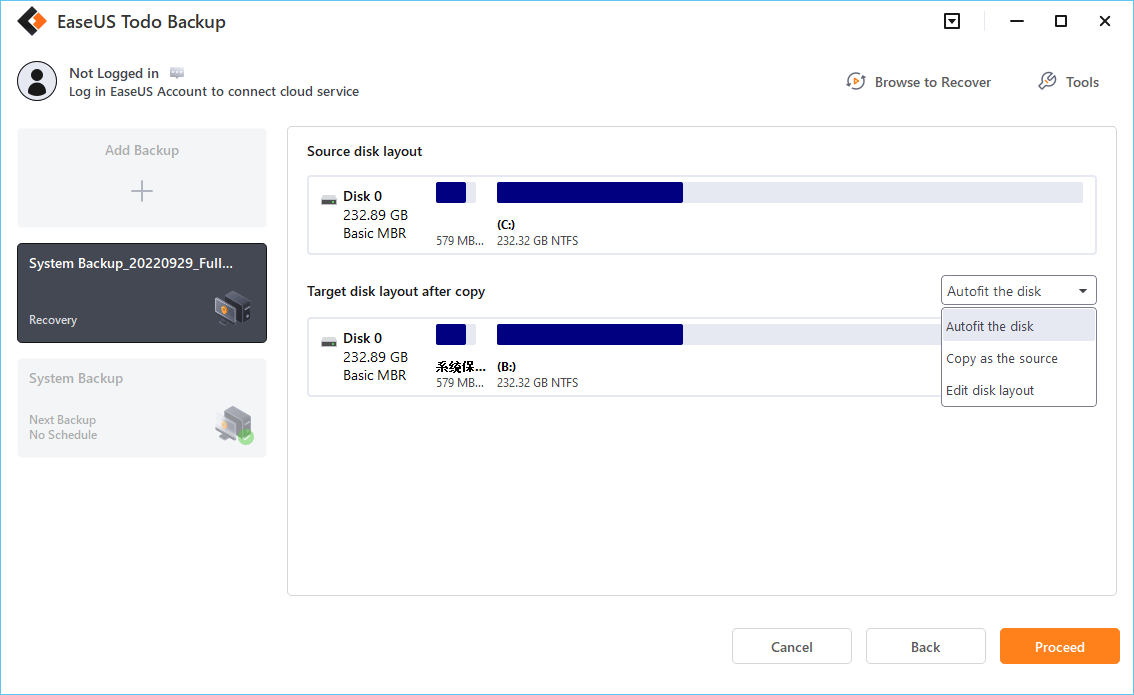 When EaseUS Todo Backup completes the system transferring process, you have one last step to go. It is to configure the BIOS boot mode on your computer as the same as your old PC:

Step 2. Go to the Boot menu and find BIOS Mode.

Step 3. Switch the boot mode as the same as it was on your old PC - Legacy or UEFI.

Step 4. Save the changes and exit to boot your computer.

Wait patiently and you'll see that your computer will boot up smoothly with the same operating system on your old PC.

 For Your Information
EaseUS Todo Backup only transfer your OS. To activate Windows, you'll need a new activation key.

Further Reading: Why Is Windows Backup and Restore Not Recommended

Here is a comparison table that you may interested in and you will figure out why EaseUS Todo Backup exceeds Windows Backup and Restore:

Due to the limit of Windows Backup and Restore, Windows 10/8/7 users can only use it to backup and restore the system or files on the current PC. It doesn't work to back up and transfer the system to a new computer.

If you want to create a Windows image via Windows Backup and Restore, refer to Backup Windows 10 to USB for help.

If you are a Windows beginner and prefer a feasible solution to backup Windows and transfer system, EaseUS Todo Backup can be your best shot.

This page answers the questions of all Windows users about "How to use Windows image on a different computer" or "How to create and restore system image to a new computer".

To do so, you'll need a reliable Windows backup software like EaseUS Todo Backup to create a Windows system image first. Then save the system image to an external hard drive.

Last, you'll need to restore the system image to your new computer and set the computer bootable by configuring the BIOS mode.

FAQ on Restore Windows Image to A Different Computer

Can I restore Windows 10 to another computer?

Yes, of course. You need to back up the old Windows 10 system first and then restore the backup to the new computer. Follow the steps in the post to restore it.

How do I restore the Windows image?

If you use the Windows Backup tool to backup, then you can restore the Windows image to a new PC with the following steps: Open settings - System - Backup, and then select the "Restore from a system image" option. Click "Select recovery disk" and choose the Windows backup drive. Choose "Only restore system drives," click "Next," and then follow the wizard to finish the process.