Backup and Sync No Longer Available: Try Another Way

This article defines the reasons behind Backup and Sync being no longer available. As a bonus tip, it will also explore viable alternatives.

The error of "Backup and Sync is no longer available" started rolling out after 1st October 2021. That's when Google decided it was time to retire Backup and Sync and replace it with the desktop version of Google Drive.

In other words, what were once two different programs, are now combined into one. This unification isn't really welcomed by many people, as people opted for ease over a unified tool.

So, are there better alternative now that Backup and Sync is no longer available? How do other storage providers hold up? Let's try to find out other viable ways.

Is Backup and Sync Discontinued?

Yes, Backup and Sync are discontinued by Google. While Google had a nice way of putting it by saying, "Backup and Sync and Drive File Stream Have been unified into Drive for desktop,” a lot of people didn't take it lightly. After 1st October 2021, it stopped working for users around the globe.

Needless to say, people started going on the internet to look for answers. With a bunch of YouTube users telling exactly how they felt about this change, with this one particular user speaking for many:

While others indicated they wanted a new or alternate option:

While a majority of the users are treating it as the absence of Backup and Sync, Google wants users to know it's more like an addition of a new and more dependable program. But, this isn't the first time it has happened. Back in 2018, Backup and Sync was the very program that replaced Google Drive back. Therefore, instead of it being a takeover, it's more of a takeback for Google Drive. But, as everyone knows, Google likes to have its name on its branded programs.

People haven't taken the "Backup and Sync is no longer available" option very lightly. Some users even reported that they lost some data because of it. Since the final release note of Back up and Sync, people now know it's not an error. Instead, Google has officially discontinued this much-revered service.

What to Do: Switch to Google Drive for Desktop

If your files are stored in your Google account, you do need to switch to Google Drive for Desktop. This is the only way you can access a tool like Backup and Sync, which Google is now calling Stream files or Mirror files.

So, how do you do that? By downloading and installing Google Drive on your Desktop. Here’s how:

Step 2: Install Drive on your computer 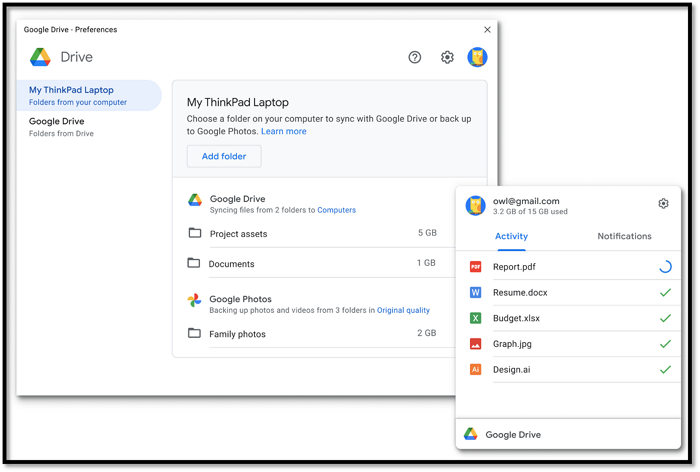 Step 4: Click on the Settings cogwheel and Resume Syncing 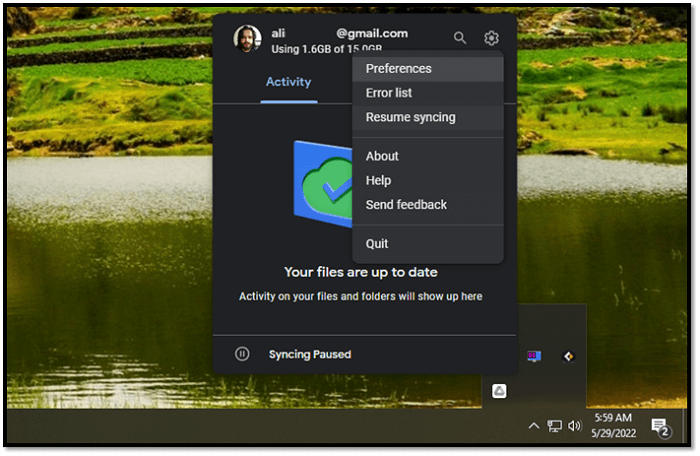 Now that you're done syncing your Google Drive desktop app, how exactly is it different from Backup and Sync?

These factors make Drive actually a little more favorable than its predecessor. But, like anything related to computers and software, it takes a little time for people to come around and accept changes.

Suppose you're done with Google's changes and constantly having to face hassle when trying to backup files. In that case, you can try a professional and better alternative – EaseUS Todo Backup. What makes this tool a better and much more suitable program for users today?

These factors, including many more, make this program a viable and dependable alternative. Therefore, if you're looking for a program that eases backup for you, then this one is it. You can backup your files according to the following steps:

Step 3. Both local and network files will be listed on the left. You can expand the directory to select the files to be backed up. 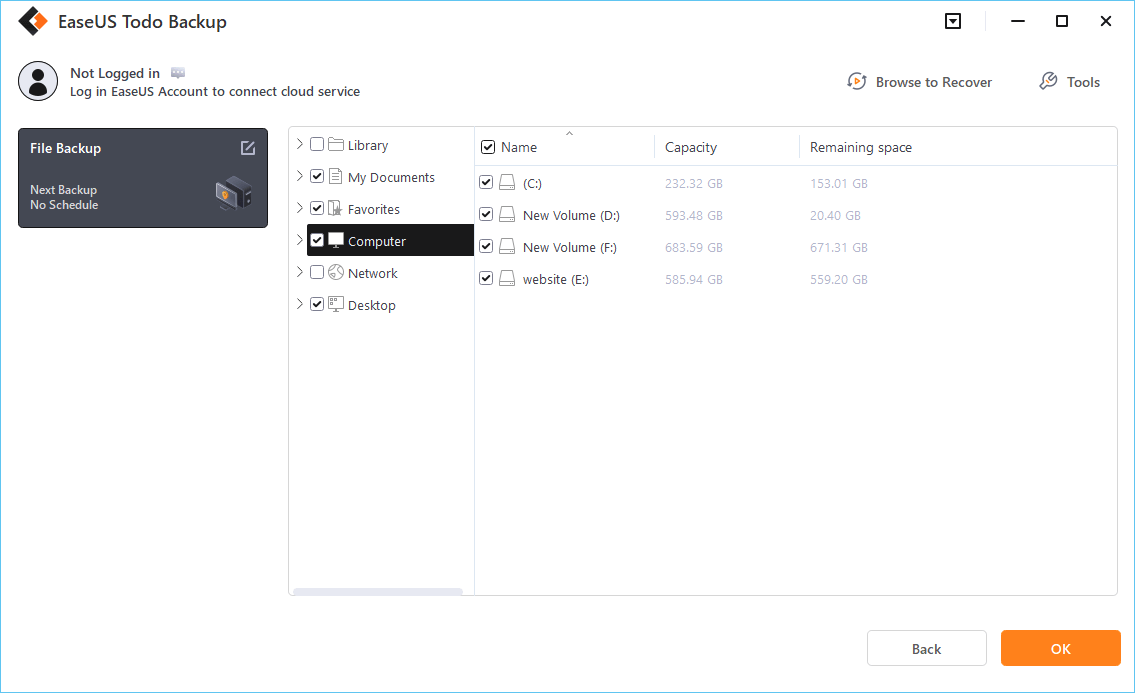 Step 4. Follow the on-screen guide, select the destination where you want to save the backup. 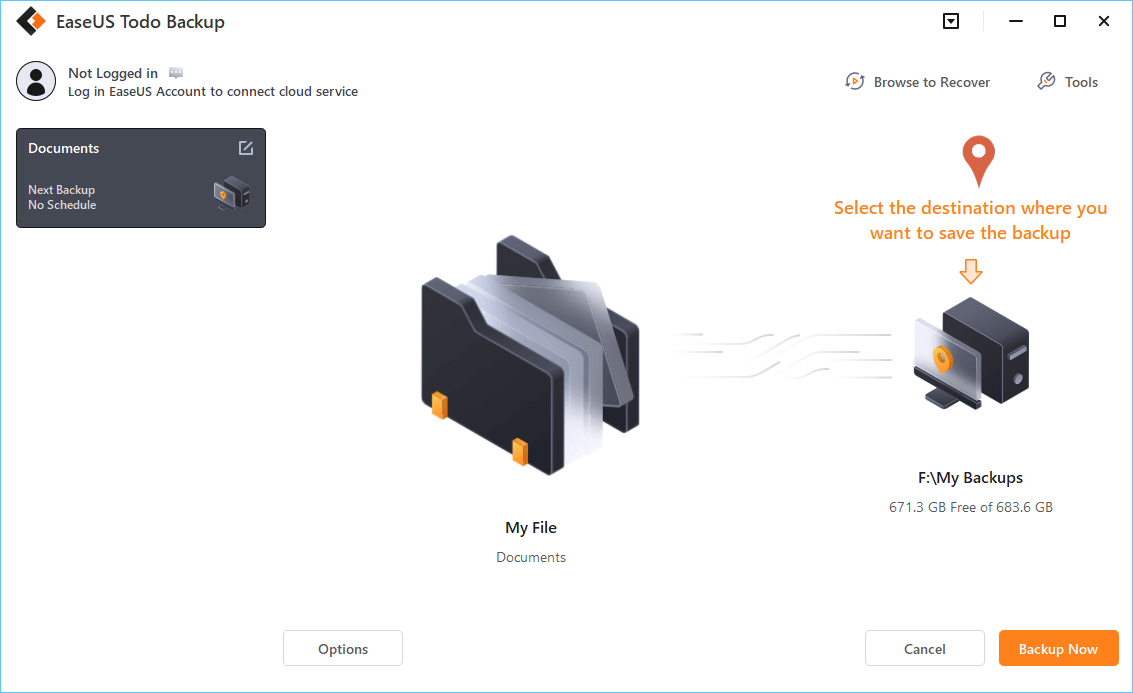 Click "Options" to encrypt the backup with password in "Backup Options", set the backup schedule and choose to start back up at certain event in "Backup Scheme". There are also many other options you can explore, customize the backup task according to your need. 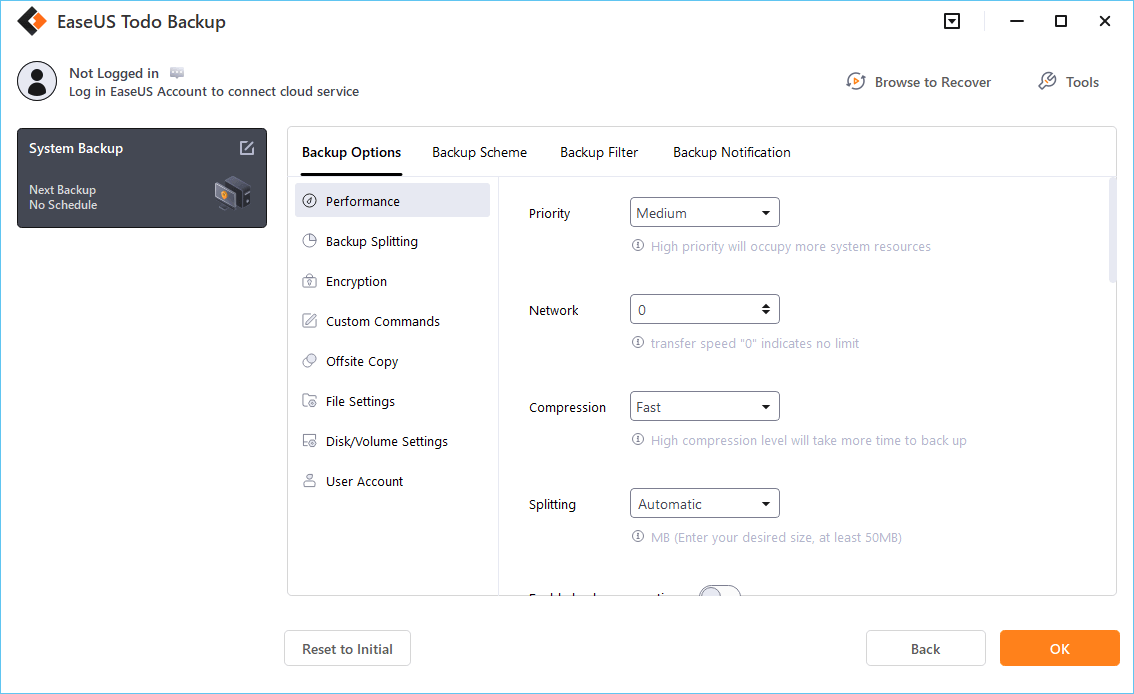 Step 5. You can store the backup to local drive, EaseUS's cloud service, and NAS.

Step 6. EaseUS Todo Backup enables users to back up data to both third-party cloud drive and its own cloud drive.

If you want to back up data to third-party cloud drive, choose Local Drive, scroll down to add Cloud Device, add and login your account. 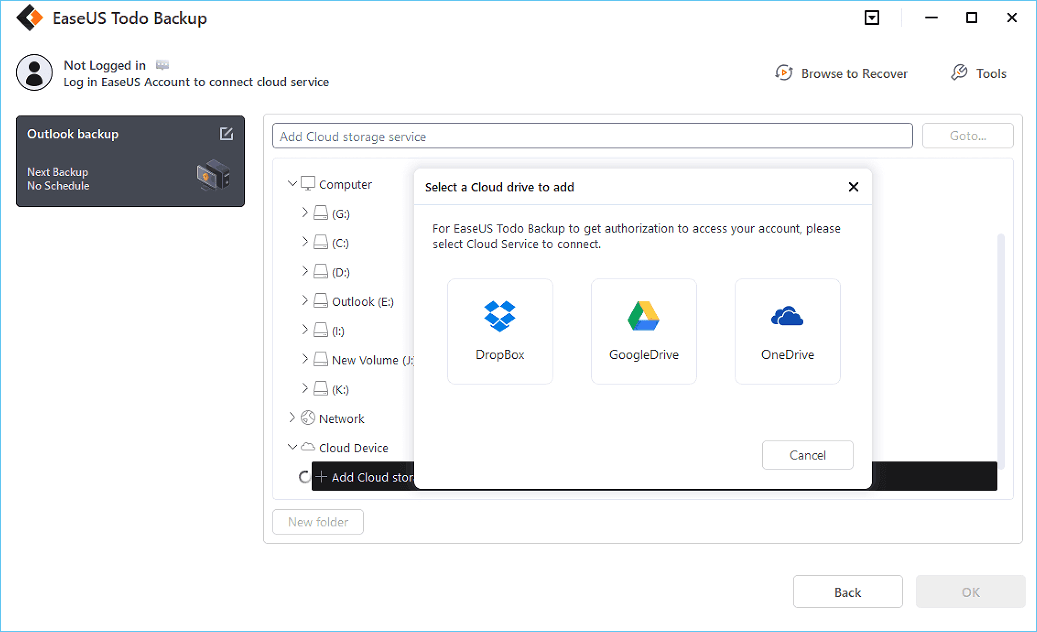 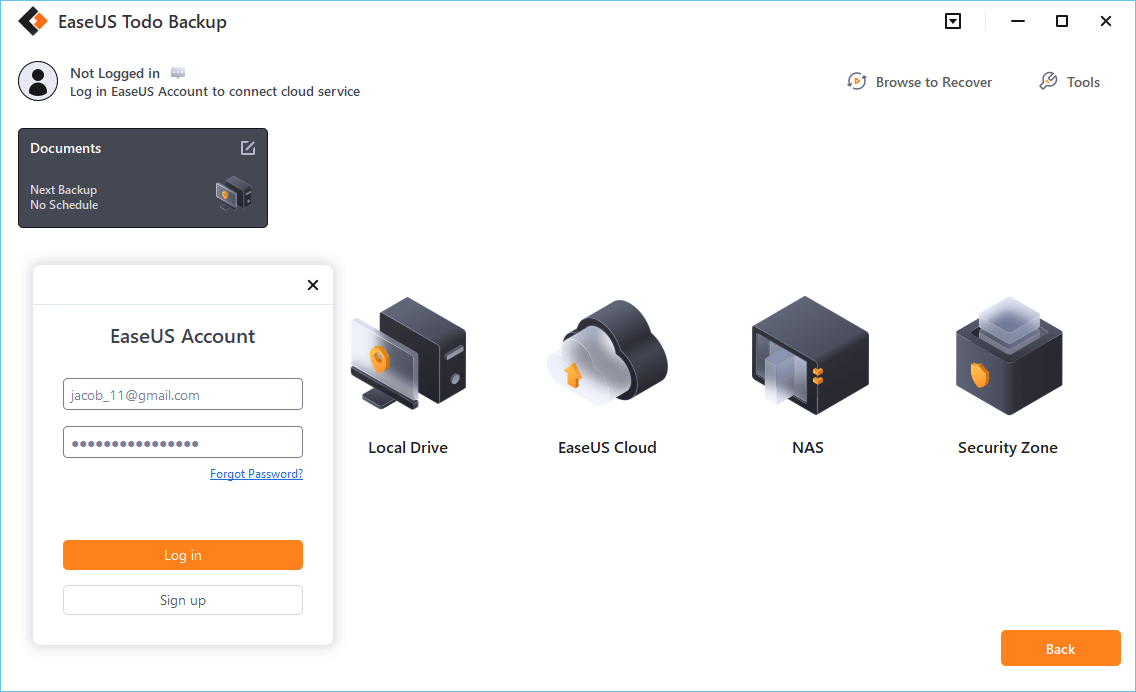 Step 7. Click "Backup Now" to start backup. After the backup task is completed, it will be displayed in the form of a card on the left side of the panel. Right-click the backup task to further manage it. 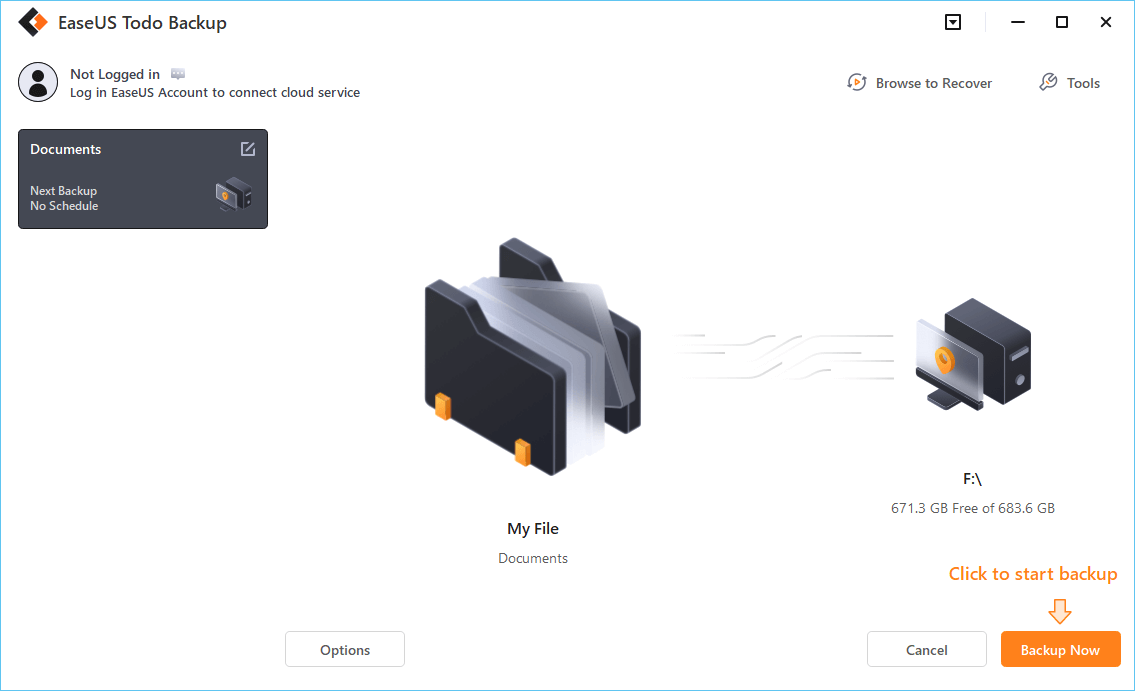 1. Are Backup and Sync the same as Google Drive?

Yes, it is. Google Drive actually upgraded to Backup and Sync back in 2018. However, in 2021, Google reverted Back up and Sync and Drive Stream back into one program and unified it under the name of Google Drive for Desktop.

2. Why did Google get rid of Backup and Sync?

Instead of having to use two programs, Google decided to make it easier for the users by turning it into a single desktop app.

These are some of the reasons Backup and Sync are no longer available on your computer. There are viable alternatives, like Google's own Drive app for desktops. However, you can try EaseUS Todo Backup to ensure the further safety of your important files. What's more, it can help you create a copy of your computer to an external hard drive.