EaseUS Partition Master is familiar to users as reputable OS Migration software, with which users can move/migrate/transfer OS to SSD without reinstalling Windows 11/10/8/7. It supports to transfer OS from HDD to SSD, SSD to SSD, MBR disk to GPT Disk or GPT disk to MBR disk.

Personal buyers and computer manufacturers are likely to choose SSD as a thinner, lighter, and faster alternative to HDD in recent years. Undoubtedly, SSD has become the trend of top-rank hard drive storage choices in 2019 and will be in the next few years. After investing some money in a new SSD, what are you going to do subsequently? Replace the old HDD with the new SSD, I guess. There is a way to transfer your Windows 7,8,10,11 installations to an SSD without reinstalling Windows. It's easier and more energy-efficient than fresh install OS, as long as your current operating system runs well and you don't need to install Windows OS on the SSD from scratch.

PreparationMake Everything Ready for Transferring OS to SSD

Most people are interested in finding a hard drive migration software to directly move OS from one hard drive to the other. It takes only a few steps but saves a great amount of time. Hence, if you're looking for a capable but easy-to-use OS migration software, think EaseUS Partition Master as a dependable and convenient choice. It can transfer OS from HDD/SSD to SSD without reinstalling Windows on your own.

Before we start officially, let's check some preparatory works. After getting ready with all the mentioned points, just begin right away with the procedure.

If you're using a desktop, you got many ways to connect a second solid-state drive to your computer.

Normally, laptop users prefer to use the two latter ways.

SSD is generally smaller than HDD, it's a great idea to release some disk space or clear up some system junk files before migrating OS to a new hard drive. You can tidy up your current hard drive by using the EaseUS CleanGenius.

It's easy and light to cleaning computer junk files & large files with the following steps: 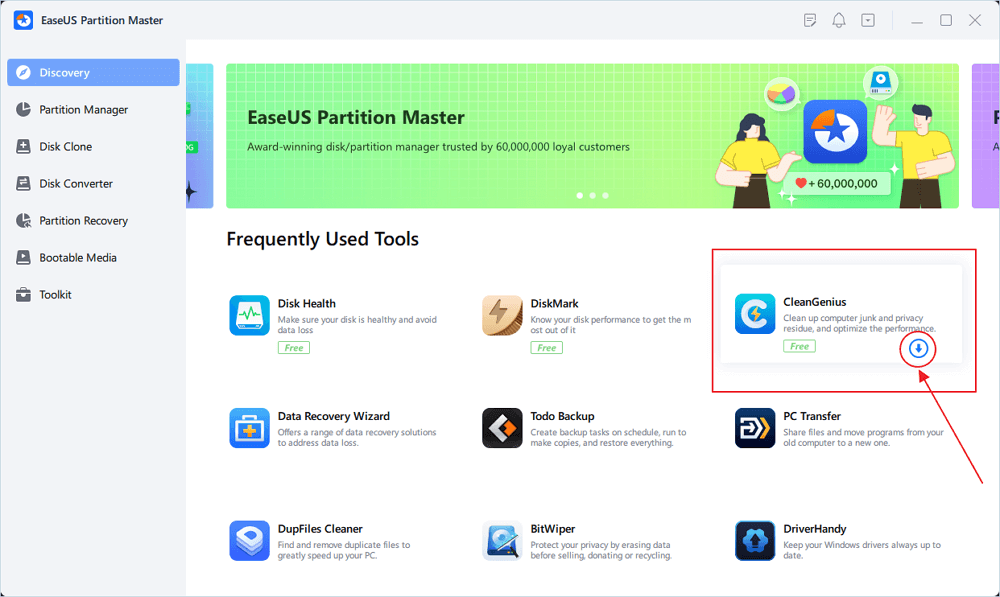 Step 2. Click PC Cleaner and install EaseUS CleanGinus. Then, click "Cleanup" and click "Scan" to start cleaning up the system and make your PC as good as new.

Step 3. The software will scanning all over your computer to find idle data files that take a huge amount of disk space, you can select useless large files, system junk files and Windows invalid entries and click "Clean" to start system cleanup process. 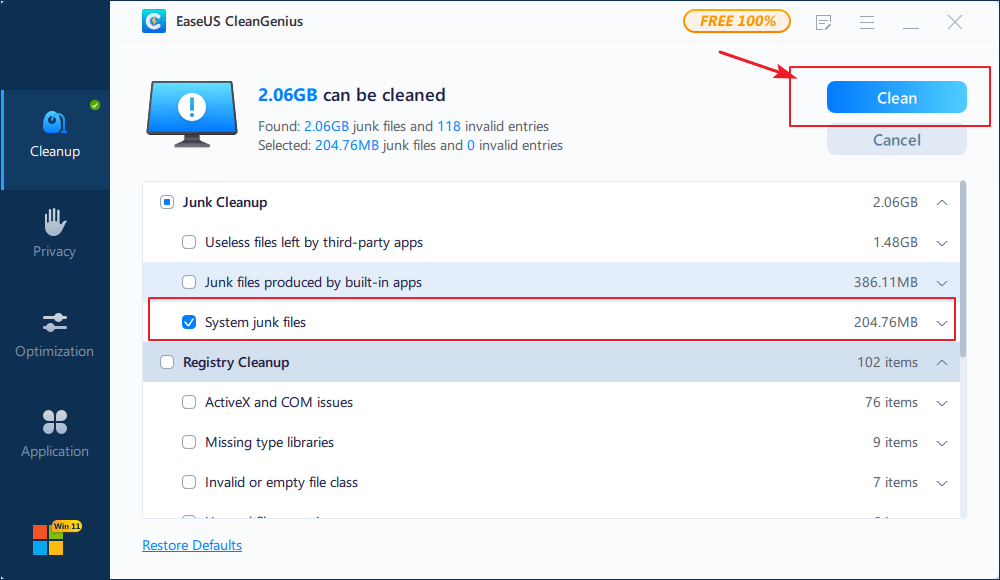 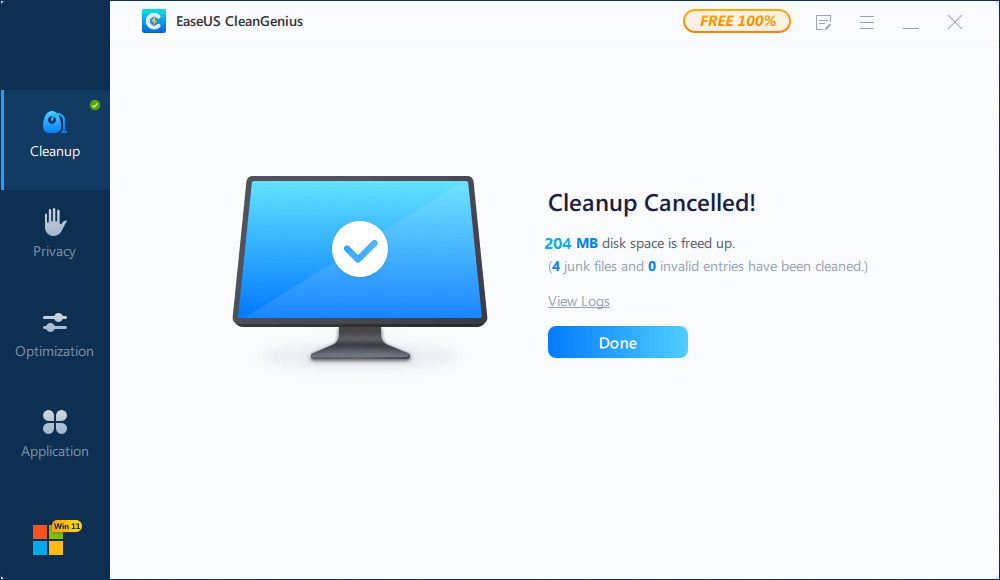 It's a wise option to back up C drive data before OS migration. We can't expect everything goes safe and sound all the time, but we can arm ourselves with a complete backup.

This is the key step. Simply click the download button here and it only takes a few seconds to download the OS migration tool - EaseUS Partition Master.

After this, you may move the next part and learn how to transfer OS from HDD to SSD

ProcedureHow to Migrate/Transfer OS from HDD to SSD

Now, let's have a look at how to migrate your Windows OS from HDD to SSD without reinstallation:

Besides, you can also use EaseUS Partition Master to resize/move partition on SSD.

EaseUS Partition Master supports clone a disk in the sector by sector and file by file disk level. You can also use it to clone and upgrade MBR or GPT disk.

IMPORTANT: Once you complete the OS migration process, remember to set new SSD as the boot drive.

There are two ways to handle the SSD after the OS transfer.

This is an easy case. After migrating OS from the old drive to the new, this time take out the HDD and leave the cloned SSD as the boot disk.

Most PC and laptops all contain two disk slots - one hard drive slot and one SSD slot. Therefore, you can choose to use the SSD as a boot drive on your computer.

Step 2. Move to the Boot section, set the new SSD as the boot drive.

Step 3. Save the changes and restart PC.

After this, your OS will automatically run from the new SSD and you'll experience a faster computer with better performance then.

On this page, we covered the whole process of how to migrate or transfer Windows OS from HDD to SSD without reinstalling Windows OS. EaseUS Partition Master with its Migrate OS to SSD feature makes everything easy for OS migration.

And don't forget to set the new SSD as the boot drive after moving OS. If you have further disk management needs, turn to EaseUS Partition Master for help.

FAQs About Transfer OS from HDD to SSD

If you have further more questions on how to transfer OS from HDD to SSD, follow and find answers to these listed questions here:

1. Can I transfer Windows from HDD to SSD?

Yes, sure. You can transfer Windows from HDD to SSD with the help of reliable OS migration software such as EaseUS Partition Master. For a step-by-step guide, you can refer to the tutorial guide on this page for help.

3. How to transfer OS from HDD to SSD free？

4. Is it good to migrate OS from HDD to SSD?

Yes, sure. As we know, SSD is faster in reading and writing data than HDD. And SSD is also lighter and more quite. Migrating the OS from HDD to SSD will help to improve the OS and the installed programs' performance greatly on Windows computers.

Tracy joined in EaseUS in 2013 and has been working with EaseUS content team for over 9 years. Being enthusiastic in computing and technology, she writes tech how-to articles and share technical solutions about Windows & Mac data recovery, file/system backup and recovery, partition management, data transfer, Windows update issues, etc.