For ordinary computer users, it's not a big deal to fresh install a Windows operating system, or update the present Windows into a new version. On the contrary, for business owners who have a batch of computers to handle, what's the most efficient way to install Windows 10, for example, to multiple computers at the same time? Taking care of each machine, one by one is never the wise management method.

Besides, every time you install Windows OS on each PC, you'll have to run to the computer's location. It doesn't sound like a time- and effort-saving efficient plan, either. So is there a way to remotely deploy Windows 10/8/7 system image to several nearby computers? Can you update all computers' OS simultaneously? Don't bother. To save time, energy, and money, you can rely on some professional system deployment tools.

Here in the following, you will learn how to set up, install, and configure Windows 10 operating system on new PCs, workstations, and servers with EaseUS system backup software and system deployment tool.

Part 1. Prepare for installing OS on several PCs at the same time

Before you start planting Windows 10/8/7 on side-by-side computers all at once, you must do three preparation jobs as below.

Step 2. Ensure that all computers which need to install or upgrade to new Windows OS are under the same LAN.

Step 3. Create a full system backup image with EaseUS Todo Backup and put the image on a network where you can access it from the master PC. (Detailed in Part 2)

In order to deploy the system on several different computers at the same time, a highly recommended method and must-be access to solving such a problem are to create a system backup image. EaseUS Windows backup and recovery software allows you to create a backup system image with simple clicks. Remember to put the system image on a network place where other PCs and your master computer can access it.

Part 3. Install Windows 10/8/7 on multiple computers at one time

So now it's the last step, how can you deploy or install the Windows system into other PCs at one time? To realize the goal, you'll need a specialized system deploy management tool. Here, we recommend you try EaseUS Deploy Manager, which allows you to place the Windows operating system on several computers with a few simple clicks. Follow the below steps to install Windows 10/8/7 on computers now. 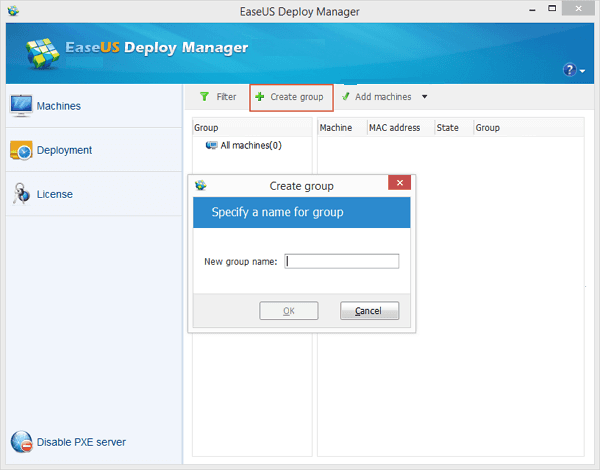 By Mac address: you can directly input the computer's Mac address, Alias name into the group so to add machine for system deploying/installing.

From file: this allows you to directly import a file into the software to add computers. The TXT file contains the computers' information including Mac address and Alias with Space or Tab

Click "Create" and then enter a task name and select the machines that you've added in step 1. And click "Next". 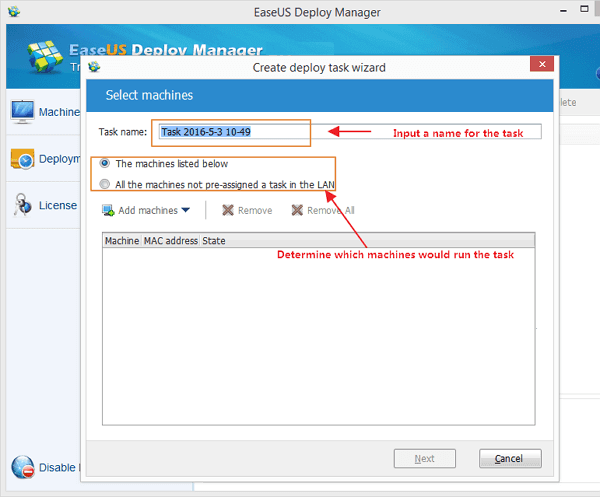 Choose the created task and click "Run" to execute the deployment task. When the task is complete, you'll successfully install OS on all involved computers then. All you need is to be patient while the software is executing the task.

EaseUS Deploy Manager can also help you update computer systems at the same time without any limits. It aims to simplify the IT administration routine and improve work efficiency. With the help of such an efficient system deployment solution, you are able to intelligently create an exact copy of your system as a master machine, including machine-specific configurations, deploy the image, and install Windows systems to a mass of live machines.

In a word, it is ideal for rapid bare-metal deployments to a large number of PCs or servers, and it ensures that changes deployed into a target system environment are executed in a structure. No need to manually install Windows on every machine.

Can I use the same Windows 10 product key on multiple computers?

No, you can't. The Windows 10 product key is only valid for one computer. If you try to use it on another computer, it won't work. Each computer has its own unique product key.

Can I have Windows 10 and 7 on the same computer?

Yes, you can have both Windows 10 and Windows 7 installed on the same computer. However, you'll need to install them on separate hard drives. Otherwise, they'll interfere with each other and cause problems.