Driver backup software is first of all a software product that helps you create backups of your computer drivers of hardware and software. Second, it lets you restore these drivers if something goes wrong. That way, you can always keep your drivers up to date and safe.

Most driver backup software offers a wide range of features and allows you to make backup copies of your drivers with just a few clicks. They also let you schedule driver updates and install them automatically, so you don't have to worry about doing it yourself.

We've rounded up the five best driver backup software programs for Windows 11, 10, 8.1, 7, and XP. They're all coming with free plans, developed by reliable companies and offering robust features to make driver backup and restore easy. They are:

When you are wondering what is the best driver backup software, it is important to first understand what a driver is. In computing, a driver is a small piece of computer code that allows one piece of hardware to communicate with another piece of hardware. This could be something as simple as allowing your computer to print to a printer or to connect to the internet. If you've ever used GPS for driving, you can consider a driver to a computer as a GPS for your car.

Most driver backup software programs will support all the major hardware brands, including Intel, AMD, NVIDIA, and Realtek. They will also support a wide range of devices as well.

Drivers are constantly being updated as new versions of the hardware are released and as new software is developed that needs to communicate with that hardware. This means that it is important to have driver backup software so that you can create backups of your drivers and restore them if something goes wrong.

There are a few things that you should look for when you are choosing satisfactory driver backup software.

* Driver is a small part of essential elements to make a computer functional. Apart from drivers, pay attention to OS as well, which is prone to be attacked by ransomware, new Windows update installation, and system file corruption. It's critical to create a system image for Windows as well. EaseUS Todo Backup is an all-around backup utility for Windows devices. 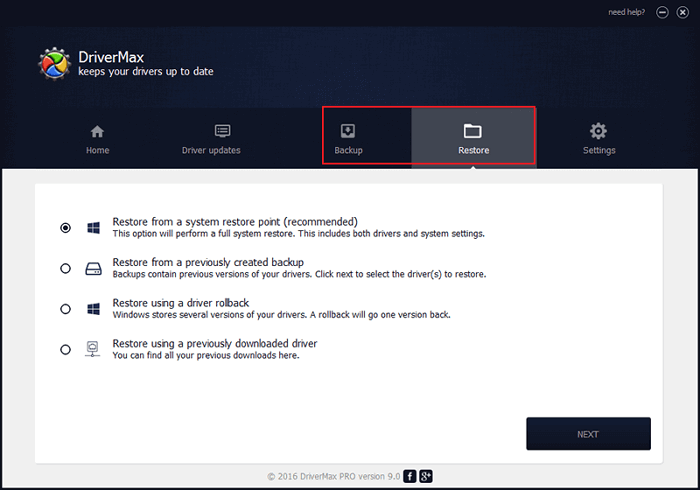 DriverMax (secured website: https://www.drivermax.com)is a driver updater that finds and downloads the latest driver updates for your computer. It offers a simple interface that makes it easy to find, download, and install drivers. DriverMax also lets you create backups of your drivers and restore them if something goes wrong.

DriverMax permits 2 updates per day for its free users, but the driver backup function is completely free to use.

Double Driver is able to scan, select, save, print, backup and restore drivers on your computer. It's a very competitive driver backup and recovery application due to the portable feature, which means that there is nothing to install. You can take it anywhere with you on a USB flash drive and use it on any computer.

Double Driver is donationware, which is free to try. 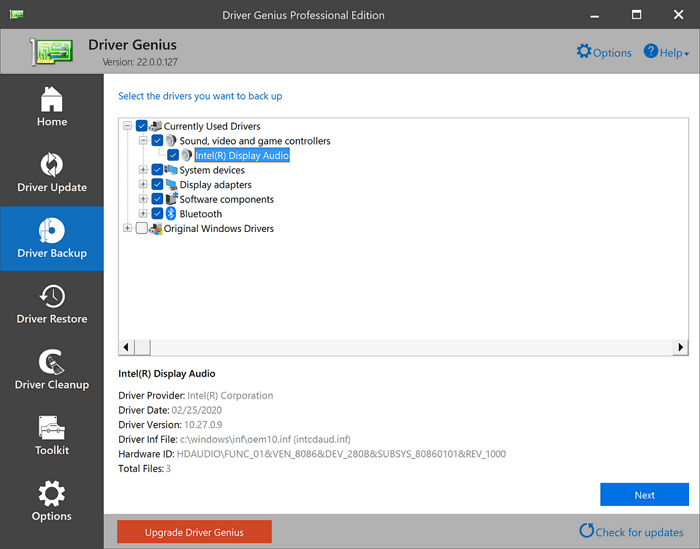 Driver Genius (secured website: https://www.driver-soft.com) detects and quickly backs up the drivers on your current system. It ensures a smooth Windows reinstallation because you no longer need to install the necessary drivers. It can also find drivers for devices that are not working properly or are not recognized by Windows. Driver Genius can scan your computer to find driver problems and then fix them automatically or recommend fixes.

The price for Driver Genius starts at $29.95 for a single-user license. There is also a free trial available with limited driver features. 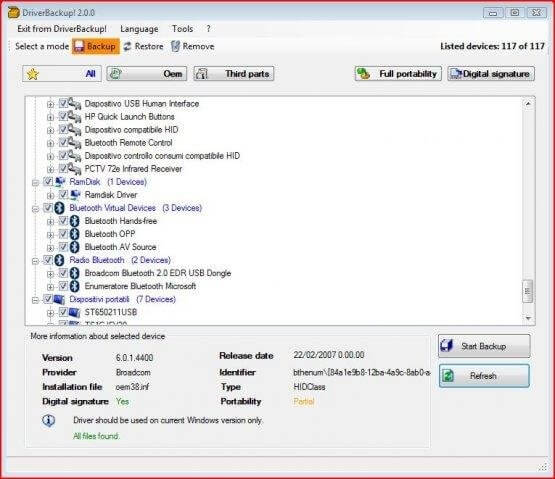 DriverBackup! is an Open Source driver backup utility that creates backups of your driver files in a compressed file. By simply unzipping the program to a location, you can run it out of the box without installation. It lets you choose which drivers to backup and where to save them, which makes it easier and faster to manage driver backups of different kinds. DriverBackup! also lets you restore driver backups and install them on other computers.

DriverBackup! is free and open-source software. There is no paid version available.

Top 5. Driver Magician - Driver Backup and Update in One Tool

Driver Magician (secured website: http://www.drivermagician.com/index.htm) offers a professional solution for device driver backup, restoration, update, and removal in Windows operating system. It can help you to extract, backup, and restore driver files from your current system or from a driver file that you have downloaded. Driver Magician has a built-in database of more than 100,000 drivers, which are constantly updated to support the latest hardware devices.

Driver Magician is for commercial use, the more units of volume licenses you purchase, the cheaper. There is a freeware version called Driver Magician Lite, in which you can enjoy the free features of identifying hardware drivers and extracting associated drivers from the hard disk for backup.

We know that drivers play an important role in the proper functioning of a computer's software and accessories. Losing or damaging driver files can lead to big problems. Driver backup can save our day to redownload or reinstall a critical driver if we encounter driver issues like driver corrupted, driver missing, driver not compatible with Windows 10/8.1/8/7, etc.

Disk Imaging: All-in-One Solution to Protect Your Computer, including Drivers

What if there is a hardware failure or other catastrophe strikes and your computer crashes? You may have to reinstall the operating system and all your programs from scratch, which would be time-consuming and could lead to data loss. Rather than backing up individual files or folders, you can create an image of your entire hard drive, including the operating system, the associated drivers, installed programs, and all your data. This is called "disk imaging," and it's an essential step in any comprehensive backup strategy.

EaseUS Todo Backup is one of the best free disk imaging software which offers disk/partition backup, system backup, and file backup for Windows 11/10/8.1/8/7/XP users to ensure zero data loss. Therefore, if you think the driver is important, you can take driver backup first and then create an image of your entire hard drive to keep everything safe.

This is a simple guide for you to backup a Windows computer with EaseUS Todo Backup.

EaseUS Todo Backup is a good choice for disk imaging with its intuitive interface and powerful features. Take it a good companion to provide driver and system backup for Windows computers.

1. How do I backup and restore drivers for Windows 7?

2. What's the difference between driver backup and full system backup?