What Is UEFI and How Do I Use It on Windows? [Full Guide]

What is the Unified Extensible Firmware Interface, and what role does UEFI in Windows? On this page, we'll clearly explain to you what UEFI is, what's the difference between UEFI and BIOS boot modes, and how to set up a computer and enable UEFI mode on your own on Windows computers. Don't worry about having UEFI boot issues, and you can also follow the troubleshooting tutorials to fix UEFI errors like an expert.

Go and follow to set up UEFI on your PC now.

According to Wikipedia, UEFI is a specification that connects the computer's firmware to its operating system. And UEFI is regarded as a successor to replace the traditional BIOS Legacy. UEFI works on the computer's motherboard via a specific firmware, and it's pre-installed while manufacturing.

Why Is UEFI Important and How Does It Work

In a word, UEFI runs first when you try to boot up the computer, and it connects hardware with OS so to allow your operating system to boot up and load hard drive information successfully.

Here is a list that explains how does Operating System process UEFI:

Note: Microsoft introduced UEFI for x64 Windows operating systems. So if your computer OS is x86 or 32 bit, you'll need to set the BIOS Legacy boot mode on your computer instead of using UEFI.

You have two options here:

There you'll get a clear view of the UEFI firmware settings on your PC. Note that the hotkeys could be different on brands of computers. Here is at a list of hotkeys that you can apply to quickly enter UEFI settings:

From the UEFI firmware settings, you can either switch UEFI boot mode to BIOS Legacy or configure the computer to better support UEFI. But what's the difference between UEFI and BIOS, and which is better for you?

Move forward to the next part, and you'll get the answers.

UEFI vs. Legacy BIOS, Which Is Better and What's The Difference?

As you know that BIOS is also called Legacy BIOS, which was older than the UEFI, and now UEFI has surpassed BIOS in many aspects. In this part, we'll show you the difference between these two firmware settings and which is better for you. Also, you'll learn when to use UEFI and when to use Legacy BIOS on your PC.

UEFI VS BIOS, What's the Difference

UEFI does the same job as BIOS. Both of them start up first and connect the operating systems and firmware hardware before loading the OS.

From this comparison table, you'll get to learn the major differences between UEFI and BIOS:

When to Use UEFI:

When to Use BIOS:

UEFI or Legacy, which is suitable for SSD?

For more details about UEFI and BIOS, you can refer to this page: UEFI VS BIOS: Difference between BIOS and UEFI.

Before getting started to set up UEFI, it's essential to confirm that you need UEFI for your PC. Let's get started here:

First, Confirm If I Need UEFI

Note that UEFI only supports 64-bit operating systems. So please make sure that your computer is 64-bit. And if you're trying to install the latest Windows 11, you'll need to enable UEFI.

You can either follow the guide above to access UEFI settings or check system information as shown here to confirm if your computer is using UEFI or BIOS:

Step 2. Find the BIOS Mode, and you'll see if your operating system is using Legacy or UEFI. 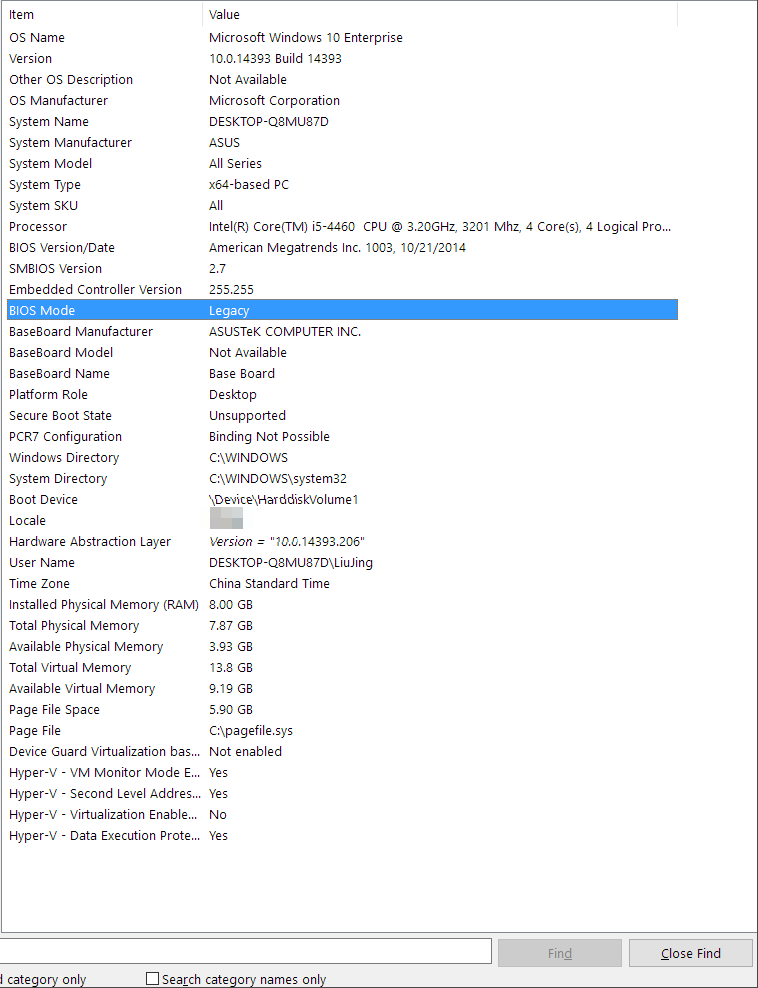 Aside from this, the most common way to check Windows boot mode is to reboot the PC and use hotkeys such as F2/F10/F11, etc., to enter the BIOS settings. You can follow this link to learn if Windows Is Using UEFI or Legacy on your PC.

After getting to know your boot mode in Windows, it's time that you take action to check the disk type in Windows. Note that the UEFI boot mode is only compatible with GPT disk type.

It's necessary that you check and configure your OS disk to GPT. Here is how to do so:

First, Confirm if Windows Is MBR or GPT

You can simply go to Windows Disk Management, right-click the OS disk and select "Properties", then go to the Volumes tab and check the disk type in:

Aside from checking disk type in Disk Management, you can also apply EaseUS Partition Master or CMD for help. Follow to learn How to Tell if Windows is MBR or GPT with the other two ways.

If your Windows disk is with MBR, you'll need to convert it to GPT with the next guide here.

Experienced Windows users may know how to convert a disk from MBR to GPT by using Disk Management or CMD command. Though workable, these two methods require deleting all partitions, which will cause serious data loss.

To take care of all your disk data, you can apply third-party disk conversion software – EaseUS Partition Master for help.

If you prefer a step-by-step guide, follow this link, and you'll learn how to successfully Convert MBR to GPT for Windows 11.

After configuring your OS disk to GPT, it's time that you switch the BIOS mode from Legacy to UEFI. Here are the steps:

Step 1. Restart the PC and press the F2 key to enter the BIOS setup utility.

Step 2. Go to the Boot or System configuration tab, and click "Boot".

Step 4. Use the up or down arrow to switch the boot mode from Legacy to "UEFI". 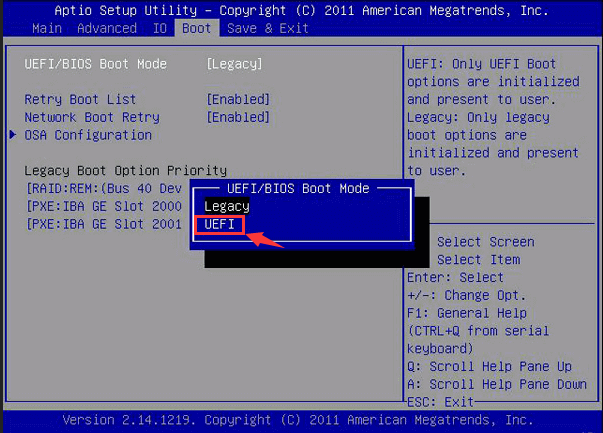 Step 5. Save the changes by pressing F10 and closing BIOS settings.

If you need a full guide to turning on or turning off UEFI boot mode, you may follow this page to learn How to Enable or Disable UEFI Mode.

Note that if you are about to install Windows 11 on your disk, it's also necessary that you turn on the Secure Boot for UEFI Boot Mode.

Suppose that you have followed the above 3 guides to complete setting up UEFI mode, it's time that you start installing Windows 11 on your PC. Here are the steps:

Step 2. Reboot the PC and, press F2 to enter BIOS settings, set the computer to boot from the installation USB.

Step 4. Click "Install Now" and select "I don't have a product key" to continue.

If you prefer an even more detailed guide that can assist you in completing Windows 11 installation on the converted GPT disk, please follow this link to learn How to Install Windows 11 on GPT.

Troubleshooting: Fix and Get Rid of UEFI Errors

During the process of setting up UEFI for new Windows operating systems, you may encounter multiple types of UEFI errors happening to your computer. If you are having one of the following listed errors, follow the respective solution to fix them now:

Cause: "Delete Volume" option is greyed out due to the Windows protection mechanism.

Error 2: Windows 11/10 Fails to Boot Because There Is a Problem with the Master Boot Record

Cause: MBR corrupted, UEFI Boot mode is not enabled, more.

Error 3: UEFI Bootloader Gets Corrupted, Windows Won't Be Able to Boot Up

Cause: EFI/UEFI boot loader gets corrupted or damaged.

If you have further computer boot issues caused by UEFI or other reasons, relax. You can directly customize tech support service to help you fix computer not booting or computer not turning on issues with success.