Updated by Gemma on Jun 14, 2022
Written by Tracy King
About the Author  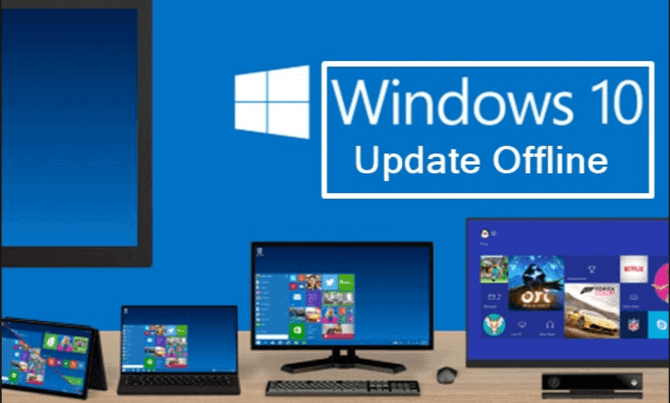 Why is Windows 10 offline update recommended?

Here below, we'll list you some reasons and advantages for Windows 10 offline update and the list may help you to better understand whether you need to update Windows 10 online or offline:

2. Shorter update time
It will save you much time for updating Windows system offline that you don't need to wait for the Internet downloading and analyzing your system configurations. You can directly update to Windows 10 from the downloaded Windows 10 offline installation files.

4. Fasting installing speed
With the early downloaded Windows 10 installing package, it will be faster in installing and updating Windows 10 on your PC by updating the system offline.

To avoid system problems or unexpected problems from happening on PC while updating Windows 10 offline, it's always a wise decision for you to backup the system and data before making any changes to your computer or laptops.

Here we'd like to introduce a Windows backup software for helping you backup whatever you want on your PC including the system, personal files, and even some other important partitions. You may not feel like the backup software but it is still worth trying. EaseUS Todo Backup allows you to backup the Windows system and data in 3 simple steps. Free download it and backup your present system with ease now.

We prefer to recommend you try this method to update Windows 10 offline with updates and patches. It makes the installing process straightforward without any extra operations:

2. Double click on the downloaded installing patch and install.
The system will check if the update is already installed or not.
If it's available, it will proceed and all you need is to follow the updating procedure to let it finish the installing process.

When you need to fast install Windows 10, this will be the most ideal way.

This method for Windows 10 offline update requires users to use a freeware Portable Update, with which, you can update Windows 10 offline without an Internet connection.
It won't leave a trace in the Windows registry and if you come across errors, it shouldn't be caused by this software.

However, it still requires Internet when you download the software and new Windows 10 update. The advantage of using this software is that the same file can be used to update different computers or update many times in the same PC.
And the program will use standard Windows Update API services to update your computer one the update is installed. If you wanna try this software, search it and download it to update Windows 10 offline now.