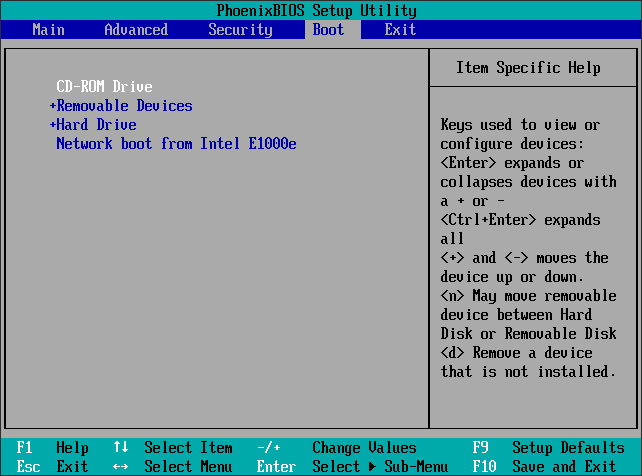 If the "Non system disk or disk error" error message is showing up because your Hard Disk Drive's boot files have become damaged or corrupt, removing all the non-bootable storage devices, checking on your HDD's IDE or SATA cable, or setting the right boot priority in BIOS/UEFI should fix the issue.

Don't worry if you are having a "Non-System Disk or Disk" error on HP, Dell, Compaq, Acer, Lenovo, etc. laptops and computers. In the following, you will find 10 fixes for general troubleshooting and advanced troubleshooting of this issue. Pick up the best solution to remove this error and make your computer work again.

About non-system disk or disk error

"What does it mean when your computer says non-system disk or disk error? It's an HP Compaq 6000 that runs trouble when I start it, a message comes up displaying as Non-system disk error or disks error, replace and strike any key when ready." 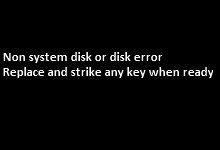 According to HP's help page, a very detailed guide is offered for HP notebook PCs to work out the "Non-system disk error" as well as "disk error" that appears on a black screen in Windows 10, 7 and Vista. In fact, the given suggestions are also applicable to other desktops and laptops, such as Dell, Compaq, Acer, Lenovo, etc.

In conclusion, you can try at first the four basic approaches, which usually helps fix the setup and stop error during Windows installation or startup.

What storage drives are currently connected to your computer? Check and try to remove all the non-bootable storage devices, namely non-system drives, that make the computer have trouble to boot from, including a floppy disk or CD/DVD disc. After the safe ejection, try to turn off and on the computer and see if the error persists on.

Fix 2. Check on your HDD's IDE or SATA cable

Check on your HDD's IDE or SATA cable and make sure that the cable connecting the HDD to the motherboard is fastened securely and restart your computer.

Access to your computer's BIOS/UEFI environment and make sure that the hard disk drive you're trying to boot from is in the right boot order settings, which should be at the very top of the boot order list. To change the boot order, you can do it like this:

A bad connection between the hard drive and the computer would also expose such unbootable issues, and most of the time it's because the hard drive was once dropped or jarred. To fix the connection problem, you must do it in a safe way by following the standard process offered here.

The above solutions are not easy for ordinary users. If you want to solve the problem in a safe way, you can use manual Windows repair services. EaseUS professional technical team can help you solve any system startup errors, including system failure, system blue screen, system black screen, and so on. 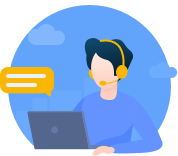 Consult with EaseUS data recovery experts for one-on-one manual recovery service. We could offer the following services after FREE diagnosis:

Excluding the outside factors that caused the non-system disk or disk error, you have to accept the facts that something went wrong with the hard disk drive's boot files, which might become damaged or corrupted, and usually repairing the HDD's boot sector, master boot record (MBR) and boot configuration data (BCD) should take effect.

What's more, to protect data on a non-bootable computer, you're strongly suggested to take the right steps to fix the issue wisely.

 Tip
Another healthy computer without boot problems and a CD/DVD disc/USB drive are required by both bootable software in order to create a bootable storage media. It's necessary to recover data from a computer or hard drive that won't boot, and manage partitions such as partition, format, or wipe partition without OS as well as fix hard drive corruption, bad sectors and rebuild MBR.

Fix 6. Access hard drive and recover data from the hard disk without OS 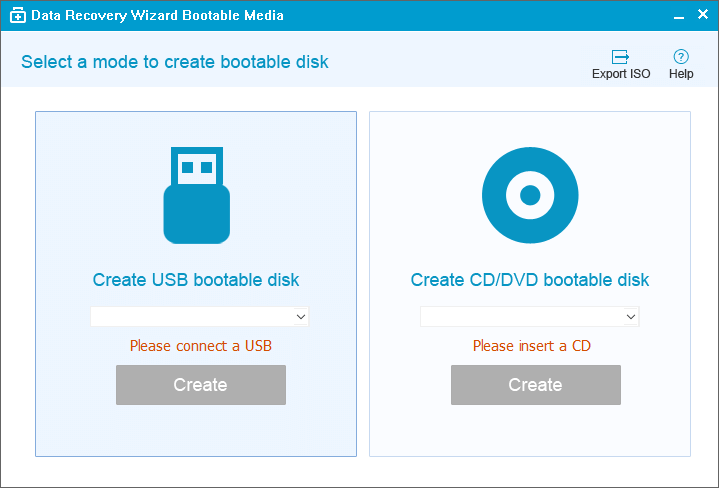 Step 2. Boot from the bootable USB

Connect the bootable disk to PC that won't boot and change your computer boot sequence in BIOS. For most users, it works well when they restart their computer and press F2 at the same time to enter BIOS.

Set to boot the PC from "Removable Devices" (bootable USB disk) or "CD-ROM Drive" (bootable CD/DVD) beyond Hard Drive. Press "F10" to save and exit.

Step 3. Recover data from a hard drive that won't boot

When you boot from the USB, you can run EaseUS Data Recovery Wizard from the WinPE bootable disk. Select the drive you want to scan to find all your lost files. 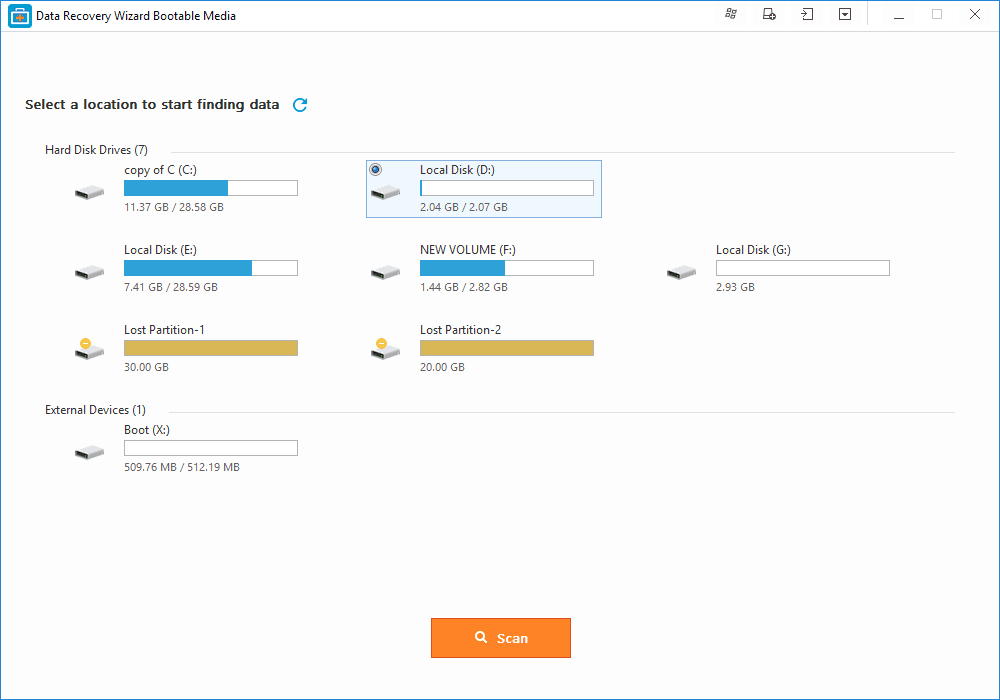 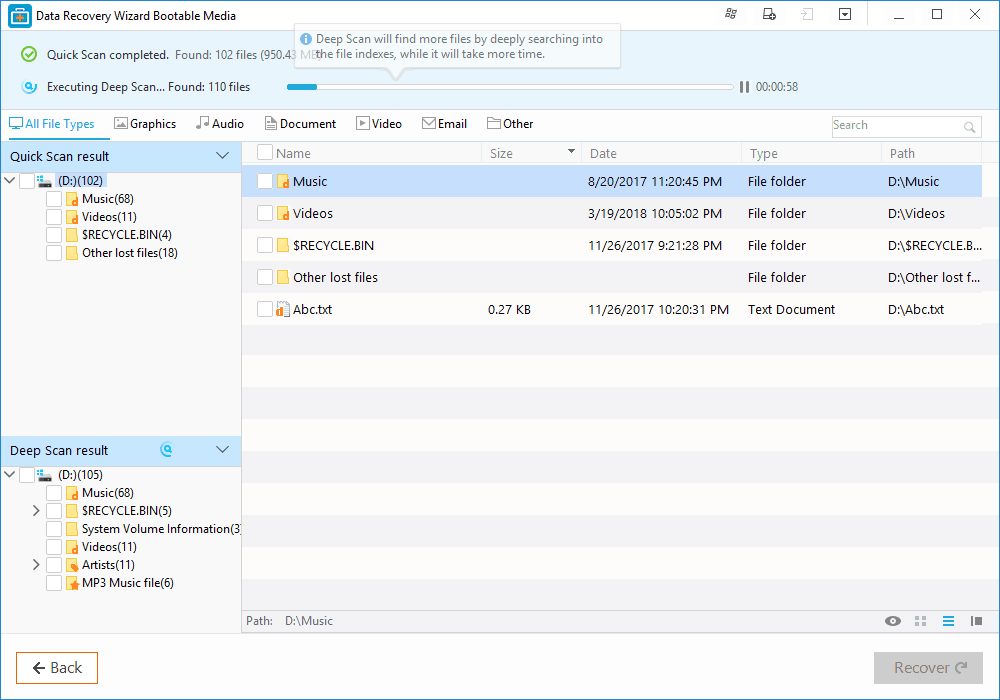 Recover data from the computer or laptop. After the scan completed, you can preview all recoverable files, select the targeted files, and click the "Recover" button to restore your files. You'd better save all of the recovered data to another place to avoid data overwriting. 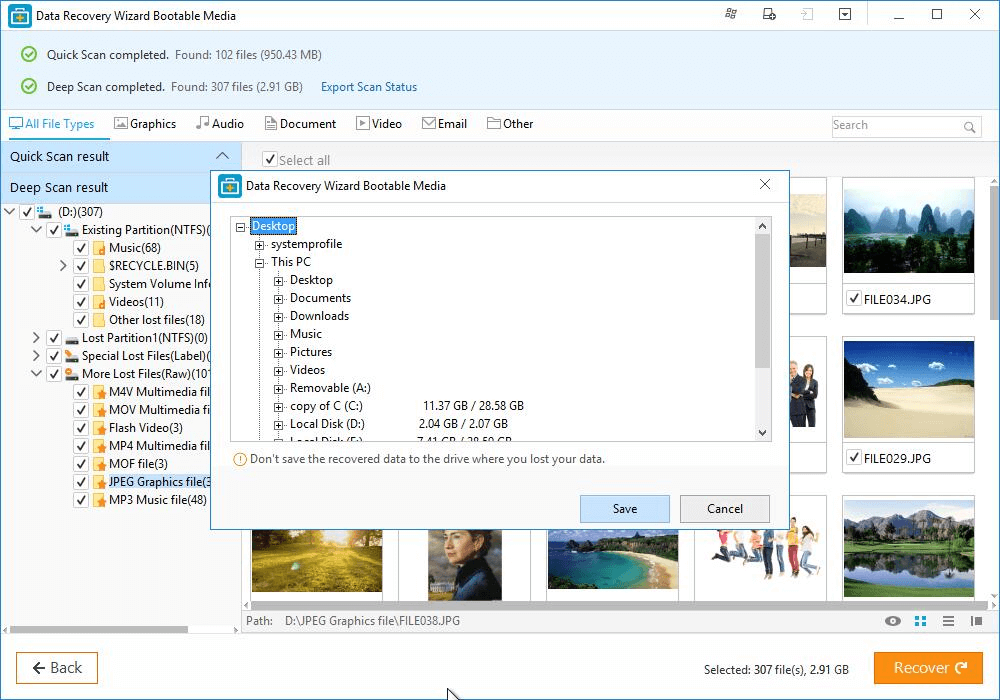 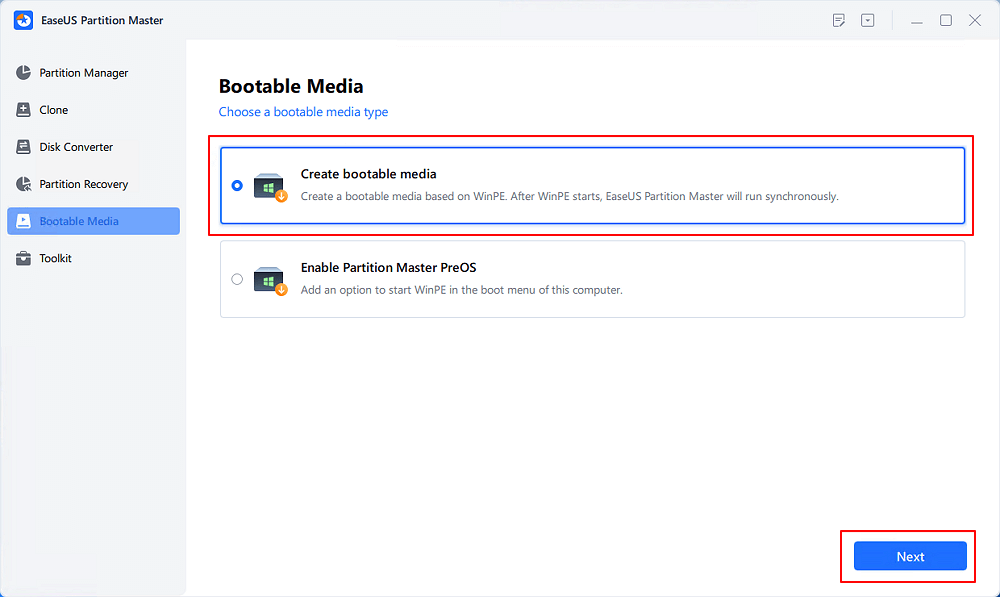 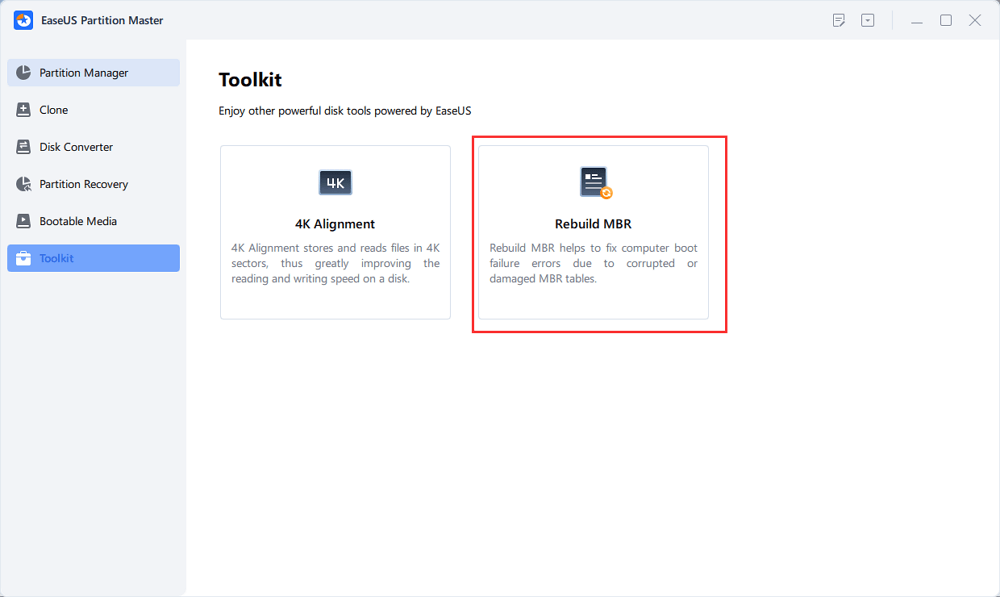 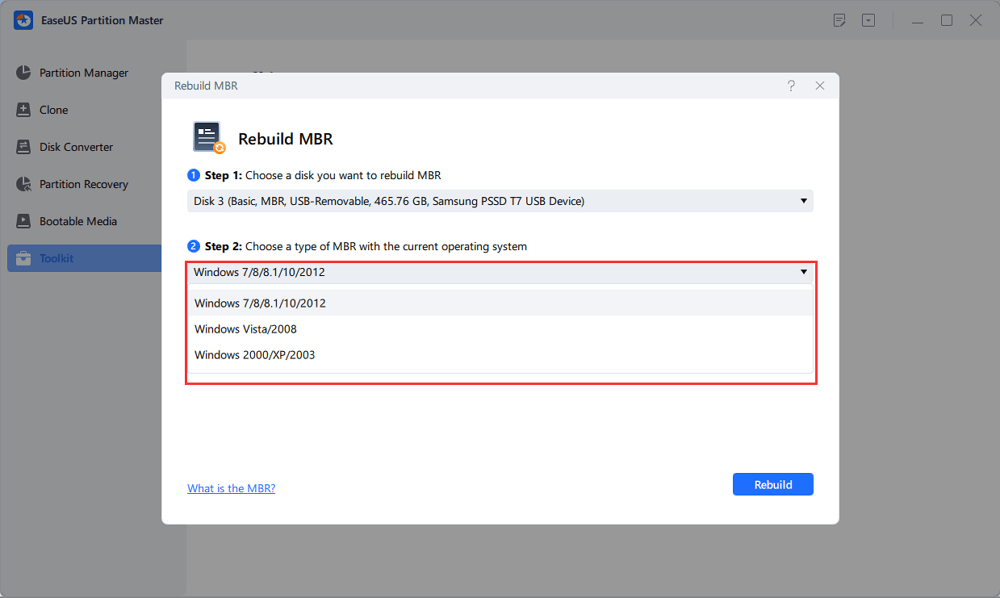 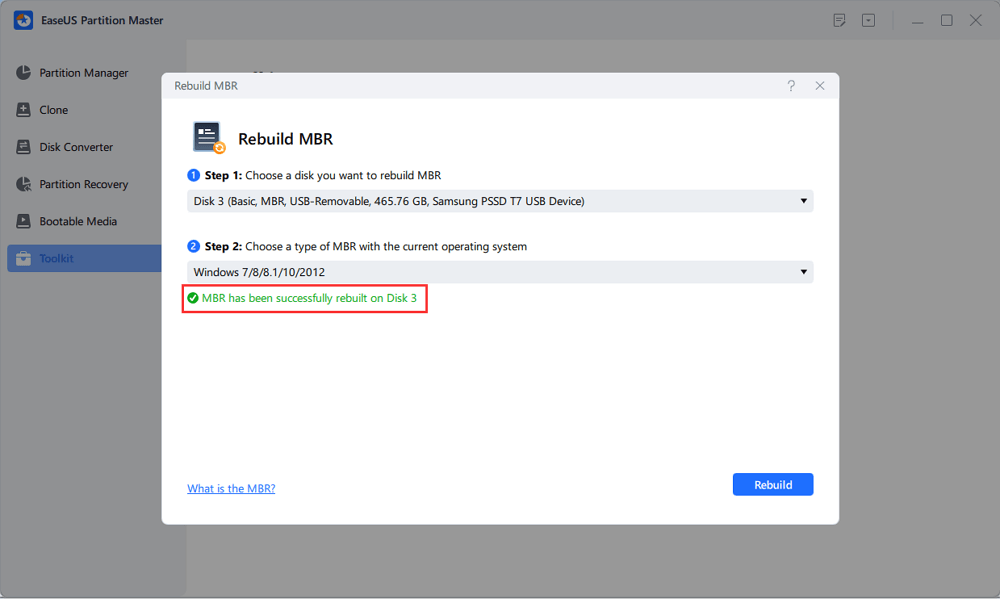 By rebuilding the corrupted or damaged MBR of the system hard drive, if by chance the error still occurs after booting up the computer, continue with the other doable methods to get rid of the error, including running diagnostics on your hard drive, check bad sectors and repair if found any, and replace the hard drive and reinstall Windows.

All those complementary solutions reply on the same essential tool EaseUS Partition Master. A detailed tutorial on how to use the mentioned functions is given on the linked pages.