MBR VS GPT | What's the Difference and Which Is Better

MBR and GPT are two popular partitions styles on Windows-based computers. They are standards for the layout of the storage device like an HDD (Hard Disk Drive) or SSD (Solid-State Drive). The partition style tells Windows how to access the data on the current disk and is decided when during the initialization of a disk. Thus, having a partition style is necessary for each disk in use. To decide which partitioning method to apply, you should first have a basic understanding of what MBR or GPT is.

What's the Difference Between MBR and GPT

Is GPT or MBR Better

Does Windows 10 use GPT or MBR

How to Check the Partition Style of a Disk

How to Interconvert MBR and GPT

MBR, Master Boot Record, is an older disk-type first introduced with IBM PC DOS 2.0 in 1983. It's named after the boot sector located at the very beginning of a drive (the first sector) called MBR. Here is a simplified structure of an MBR disk. 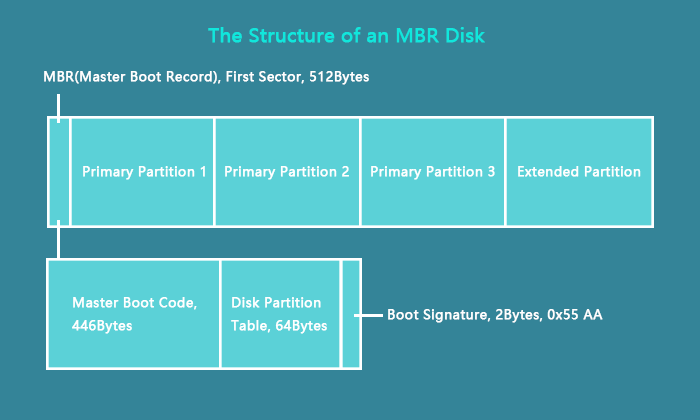 The first sector on both an MBR disk and a GPT disk is the MBR sector. It takes up 512bytes and contains the master boot code (446bytes), disk partition table (DPT, 64bytes), and the boot signature (2bytes) which marks the end of the MBR sector. The information in this sector describes how the partitions are organized on the current storage device. Thus, when it's corrupted, you won't be able to use the disk until you rebuild MBR.

The most obvious disadvantage of an MBR disk is that it only works with a maximum size of 2TiB(≈2.2TB) on a disk. That means if you have a disk larger than 2TiB with the MBR partition style, you can only use at most 2TiB space on it.

GPT, GUID Partition Table, is the newer standard compared to MBR first introduced as part of the UEFI initiative. Compared with the MBR partitioning scheme, it's more flexible and has better compatibility with modern hardware. 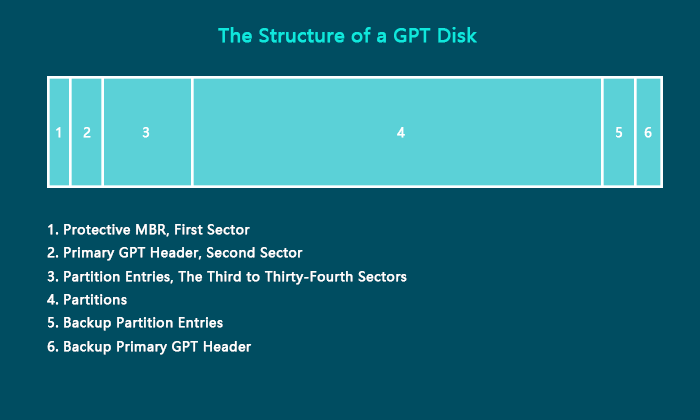 The first sector on a GPT disk is also the MBR sector. Different from the one on an MBR disk, the protective MBR on a GPT disk serves the function of preventing tools that only supports MBR disks from misrecognizing and overwriting GPT disks.

The second sector on a GPT disk stores the primary GUID partition table header. It defines the location and size of the partition entries that consist of the partition table and the cyclic redundancy check (CRC32) checksum that is used to verify the integrity of the GPT header. When CRC detects data corruption, it will attempt to recover the data using the backups stored at the end of the disk.

From the third sector to the thirty-fourth sector (32 sectors in total) are the partitions entries. Theoretically, you can create unlimited partitions on a GPT disk. However, the number of the partition you are able to create will be limited by the operating system. For example, under Windows, each partition entry is 128bytes, thus, you can create a maximum number of 128 (32*512/128=128) partitions under Windows. This is what differs a GTP disk from an MBR disk remarkably.

There is no extended partition or logical partitions on a GPT disk since there are no limits on how many primary partitions you can create.

GPT disks back up the primary GPT header and the partition entries automatically on the last sectors on the disk. That's why GPT disks are safer and more reliable than MBR disks. When the GPT header or partition table is corrupted, these backups will be helpful to restore the data.

What's the Difference Between MBR and GPT

The difference in the structure of MBR and GPT decides they will differ in other aspects. Based on the structure and technique, an MBR disk and a GPT disk mainly vary in the supported boot mode and compatible operating systems.

It's certainly true that almost all the computers running Windows boot up using one of the two ways, BIOS-MBR method or UEFI-GPT method. This indicates that an MBR disk only supports the legacy BIOS (Basic Input/Output System) mode and a GPT disk UEFI (Unified Extensible Firmware Interface) mode.

Both BIOS and UEFI are essentially low-level software that starts when you power on your PC. BIOS is the more traditional way and UEFI the newer.

The Boot Process of BIOS:

The Boot Process of UEFI:

The limits of the BIOS-MBR method promotes the appearance of the UEFI-GPT method. Due to BIOS's MBR sector boot process, you can only boot from drives at most 2TiB in size. Besides, you will get a slower boot process using BIOS. Here are the benefits of UEFI:

In addition to the boot method, MBR disks and GPT disks also vary in the operating system supported. As mentioned, GPT is a newer partition scheme, which means there may be an incompatibility with old operating systems. Actually, except for 32-bite Windows XP and Windows Server 2003 editions, all versions of Windows, like Windows 10/8.1/7/XP/Vista, can read and write GPT disks. However, to boot from the GPT disk, you need UEFI-based PCs. Similarly, almost all Windows editions can read and write MBR disks. To boot from an MBR disk, ensure the motherboard in the computer is BIOS or UEFI with BIOS mode.

Is GPT or MBR Better

MBR is the traditional partition table that supports older operating systems, while GPT is a new replacement that doesn't have limits on the disk size and number of partitions you can create. To decide which partitioning scheme to choose, you should have an overall understanding of the merits and drawbacks of it in mind.

The Advantages of GPT over MBR

The Advantages of MBR over GPT

Due to its history, MBR disks work with most of the Windows editions, especially the older versions.

Given that, to determine is GPT or MBR better should base on your needs and the hardware you have. For example, if you prefer faster boot time, using a GPT disk as the system disk is advisable; if your computer is BIOS-based, choose MBR for the system disk instead; while if you use a disk under 2TB for data storage, both GPT and MBR are OK.

Does Windows 10 use GPT or MBR

How to Check the Partition Style of a Disk

Under Windows Disk Management, you can check the partitioning scheme of a hard drive:

Step 3. Right-click the disk you want to check and choose "Properties".

Step 4. Go to the "Volumes" tab and you will see the partition style under the disk information. 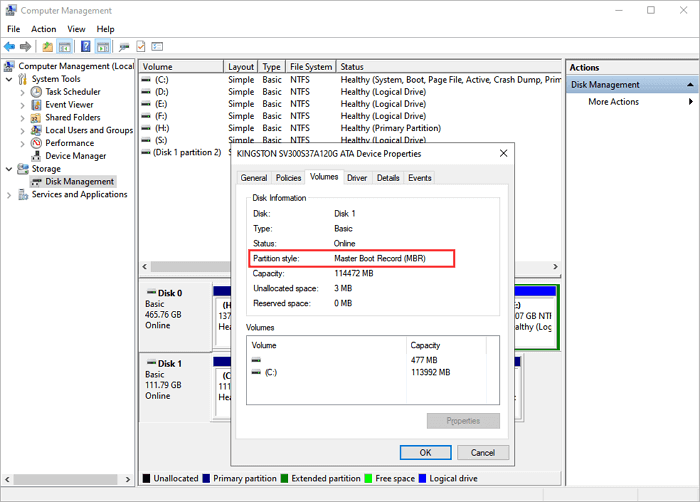 How to Interconvert MBR and GPT

You may need to convert an MBR disk to a GPT disk or vice versa. For example, if you have a disk larger than 2TiB that is currently using the MBR partition style. To use all the storage space on it, you need to convert it to GPT. You can convert a data disk freely between MBR and GPT. If you attempt to convert the system disk, make sure your computer is equipped with the corresponding firmware, namely BIOS for MBR and UEFI for GPT, or you will encounter boot issues.
To change MBR to GPT or GPT to MBR without erasing the data on the disk, The partition tool - EaseUS Partition Master will help:

Now you should have a basic understanding of the MBR and GPT partitioning scheme. With the information in mind, you could make a better decision the next time you initialize a disk or choose a computer.