Storage devices have come a long way, and so has the operating system. Apps and games need faster writing speed and installation speed to improve the user experience. That is where SSDs come into the picture.

HDD or Hard Disk Drive is an old form of storage that is slower compared to the modern SSD or Solid-State Drive. Even today there are many PCs, especially the OS installed on them. HDD makes the overall experience slow as it takes a lot of time to fetch data, install software, and everything else.

For example, if you play a lot of games on your computer, you need a faster drive, like SSD. SSDs will make sure the game launches faster, updates faster, and when you are playing it, the resource files, graphics, and every element that is needed during gaming loads faster.

Similarly, when editing a video, or downloading a large file, it is important to have a faster read-write speed. It is particularly helpful when you render a video. If the software can save more data in less time, the render will be a lot faster. Imaging a video render on HDD could be an hour while on SSD, it could be few minutes. In case you need to fix a mistake in the video, you can fix it a lot faster.

Why Install OS on SSD and Keep Others on HDD

Coming to the point of why installing OS on SSD makes sense, and everything else on HDD, it is important to understand the reason behind it along with other aspects. Let's start with SSD followed, by HDD.

SSDs have their advantages and disadvantages. A user needs to decide to get only SSD or split between SSD and HDD.

While it makes sense to upgrade to SSD, it comes at a price. There is a difference of at least 60-70% in terms of cost vs storage type ratio making it challenging to buy SSD for everything. Another disadvantage of SSD includes the fact that they will wear out faster than a standard hard drive, and even though they are more expensive, you will need to buy more than one in due course of time.

When it comes to advantages, it is all about speed and performance. OS will boot a lot faster than it was on HDD, and your gaming experience will be a lot better., editing videos will be quicker. Your PC will be able to load apps almost instantly.

The rest of the files, that you do not access often, can be on an HDD. These files can be photos, videos, documents. These files do not need a lot of resources, they would work just fine on an HDD. It is the primary reason why most of the backup drives are built using an HDD. They are not only cost-effective, but they last longer compared to SSDs. They also have more storage space compared to SSDs.

So, to find an ultimate balance, the best solution is to install the OS on SSD, and for everything else, including backup and storage, use an HDD. OS on SSD will enhance your system speed, backup, and storage; on the other hand, it will be less susceptible to disk failure. Since files on HDD will not be accessed regularly, a speed slower than SSD is fine.

How to Migrate OS from HDD to SSD on Windows 10

If you are setting up everything new, it is easy to go ahead with SSD, but not when you are already on HDD. No one likes to spend hours and hours setting up all the stuff on a new OS and then changing it to SSD. Many things need to be taken care of, including app installation, file restoration, setting up a user account, browser settings, etc.

However, there is an easy way out. Users who have installed OS on HDD and don't want to redownload and reinstall Windows on SSD can directly migrate OS from HDD to SSD with professional partition software - EaseUS Partition Master.

The software offers easy to use interface and migration tools that can clone everything on HDD and transfer it to SSD.

Once complete, you can change the boot drive in the BIOS from HDD to SSD. Reboot, and you should be able to use the computer as before.

How to Migrate All Programs from SSD to HDD Without Reinstalling

Migrating everything to SSD is only one part; you also need to move what is not required on SSD to HDD. It is needed to increase the life of SSD in the long term. So once you are done migrating, use EaseUS Todo PCTrans to migrate all the applications from SSD to HDD in simple clicks.

EaseUS Todo PCTrans is PC migration software that can moves data, applications, and accounts between computers or to another new hard disk without reinstalling. The process makes sure everything that is moved carries along all the settings, so you don't have to reinstall from scratch. The software supports the migration of applications such as MS Office, Photoshop, Adobe Software, and so on.

There are three transfer modes—via a Network connection, local transfer, and transfer via image files. It makes sure you can migrate under any circumstances.

Follow the steps below to learn how to move all programs from HDD to SSD with EaseUS Todo PCTrans.

1. Connect the new SSD or HDD to your computer and initialize it to make the drive accessible. 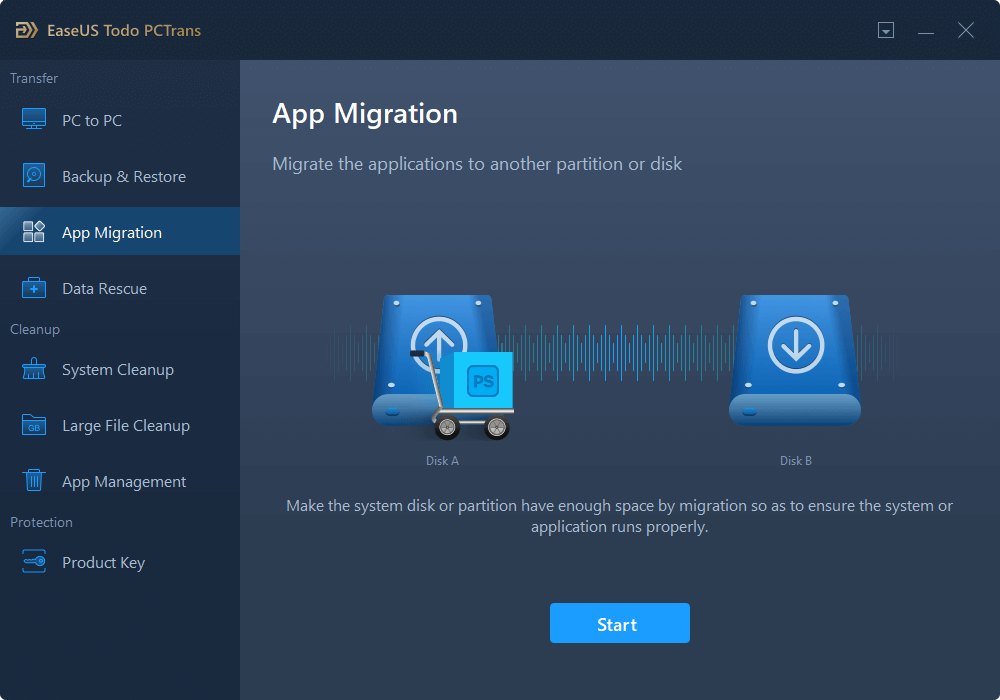 Step 2. Select apps, programs on the source disk and select SSD or HDD as target disk to transfer

1. On the source partition where you installed apps, tick desired programs (marked as "Yes") that you'd like to transfer to your SSD or HDD.

2. Click the triangle icon to select the new SSD or HDD as the destination and click "Transfer" to move the selected programs. 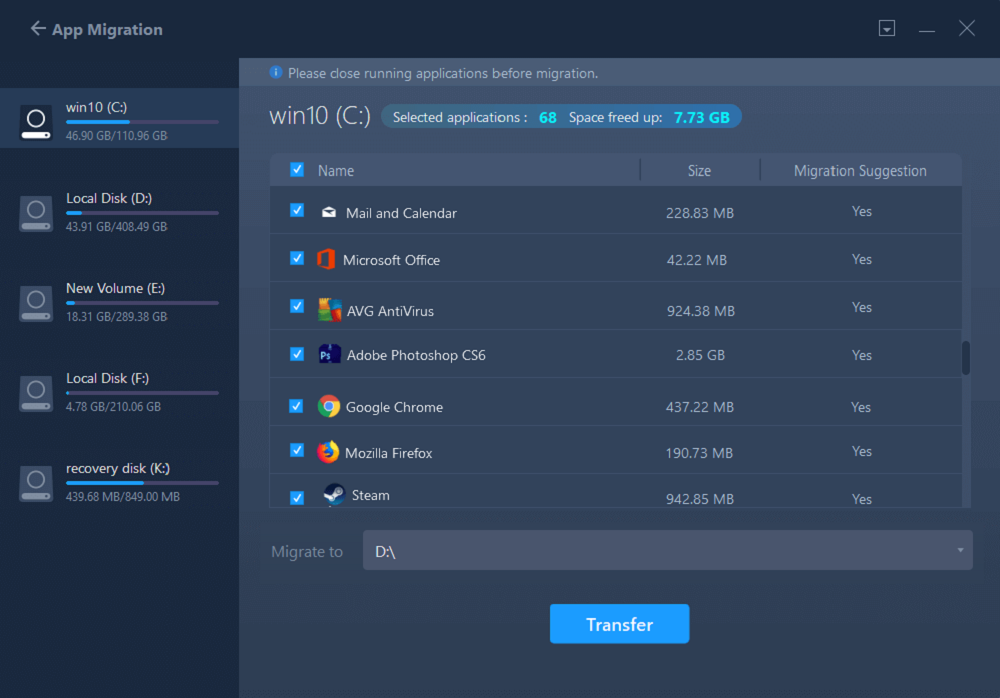 Step 3. Wait for the transferring process to finish

Then you can restart your PC to keep all the changes and you can run the transferred program on your new SSD or HDD again. 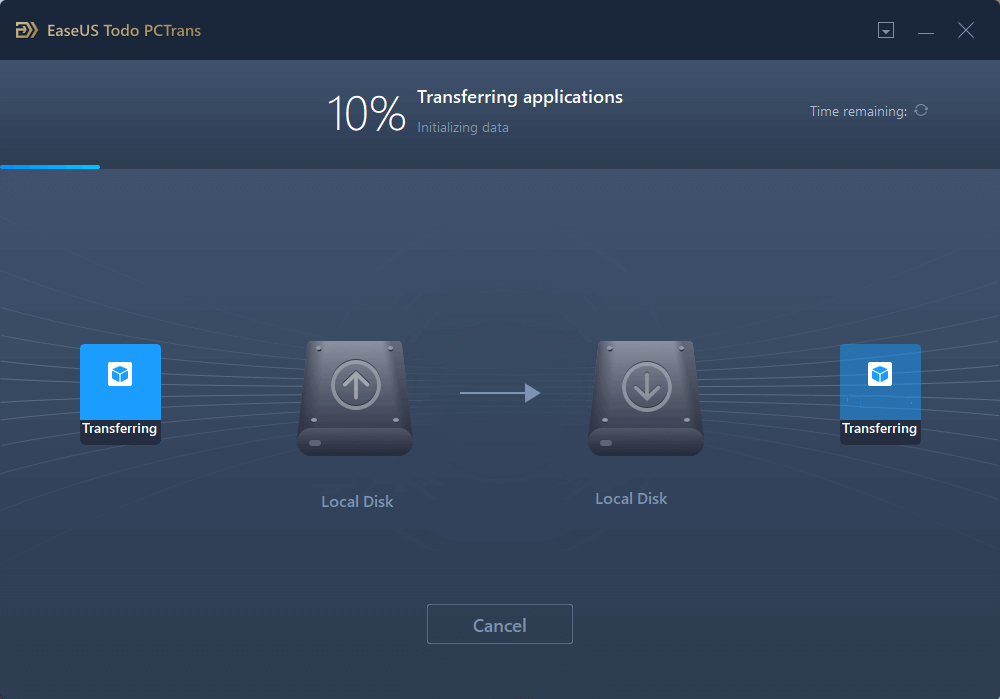 One of the best ways to improve the performance of your computer is to install a Solid State Drive (SSD) as your main storage device. While a traditional Hard Disk Drive (HDD) will always be durable than an SSD, SSDs are much faster.

To migrate OS to SSD, apply EaseUS partition management tool. Looking at all its features, it is clear that EaseUS Partition Master is a must-have utility tool that provides you with a quick, easy, and professional way to manage your hard disk's partitions with an intuitive and neat interface.