"Yesterday, I took a dynamic disk out from an old computer to my new PC. Unfortunately, I can't access the dynamic disk to see my data on. Besides, when I check the dynamic disk in Disk Management, it shows "Foreign". Is there anybody who can tell me what's going on? What is dynamic foreign disk Windows 10? How can I access the disk and fix the foreign dynamic disk? Thanks in advance." 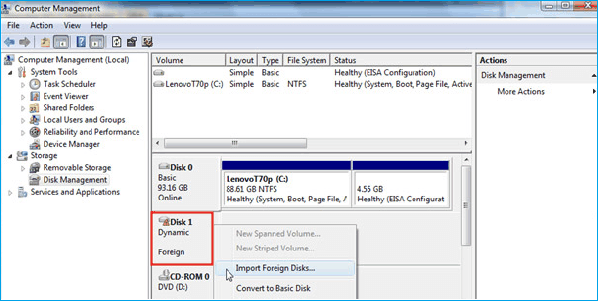 What Is Dynamic Foreign Disk

How to Import Foreign Disk Without Losing Data

When your dynamic disk is showing foreign, the data on the disk is still there but invisible. Follow instructions describing how to move and import foreign disk in two ways below.

1. How to Import Foreign Disk in Two Ways

To access data on the disk, you must add the disk to your computer's system configuration. In Disk Management, right-click the foreign disk and select "Import Foreign Disks". After that, any existing volumes on the foreign disk become visible and accessible.

Adding the disk to your 'system configuration' that supports dynamic disk won't destroy data in any way. It should be completely harmless to do, and your data should remain entirely intact.  But if you are on Windows XP Home, you cannot use the disk again through "Import Foreign Disks". The only way for you to do it is to erase all of the data from the disk and convert it to a basic disk. But then you'll lose data. The specific steps are as follows.

If you don't want to destroy or lose data? Move to the next part and see how to convert the dynamic foreign disk to basic without losing data.

EaseUS Partition Master is a powerful disk partition management software that widely used in Windows 10, Windows 8.1, Windows 8, Windows 7, Vista, XP, both 32 bit and 64 bit. It provides you with the most practical disk partition features, including resize/move partitions, create, format, delete, copy, and merge partitions; migrate OS to SSD, convert file system from FAT32 to NTFS, convert MBR to GPT, convert dynamic disk to basic disk and vice versa, and so on.

It doesn't matter what version your computer is; you can directly import a foreign disk by converting it to a basic disk without data destroy.

1. What is import foreign disk?

When you move a dynamic disk from one computer to another, this dynamic disk is flagged in Disk Management as a foreign disk. In order to access this foreign disk, you must import it first.

To access data on the disk, you must add the disk to your computer's system configuration. In Disk Management, right-click the foreign disk and select "Import Foreign Disks". After that, any existing volumes on the foreign disk become visible and accessible.