How to Choose the Right SSD for Your Needs

If you're planning to upgrade your computer with an SSD, this article is ready to offer some help. It will tell you how to choose the right SSD that is completely satisfied your needs. You will also know the benefits of SSD after you have made the choice.

Definition: What Is an SSD & Its Benefits Over HDDs

A solid-state drive, or SSD, is a type of computer storage that holds data on interconnected flash memory chips. Unlike the traditional HDD, an SSD has no moving parts, meaning it performs faster and is less likely to fail due to physical shocks. SSDs also tend to consume less power than HDDs, which makes them ideal for laptops and other portable devices. In addition, SSDs are typically smaller in size than HDDs, allowing manufacturers to create thinner and lighter laptops.

Other main benefits of SSDs over HDDs are their speed and reliability. SSDs can boot up your computer in seconds and load applications almost instantaneously. They're also much more resistant to shock and vibration, so they're less likely to be damaged if you drop your laptop. Although SSDs might be more expensive than HDDs on a per-gigabyte basis, the overall cost of ownership is often lower due to the reliability and performance advantages of SSDs. And that's why SSDs are becoming increasingly popular as the primary storage option for new computers.

6 Factors You Should Consider When Choosing An SSD

Choosing an SSD means you have made a decision between SSD and the traditional HDD. However, in the field of SSD, you still have tons of choices and could be confused. Here are a few factors you should think about when making the decision:

Commonly there are two basic physical sizes for hard drives: 2.5-inch and 3.5-inch. The standard size of SSDs is 2.5-inch, if you're planning to upgrade a new SSD for your desktop which uses an HDD as the storage device, then there is enough space to install the new SSD. 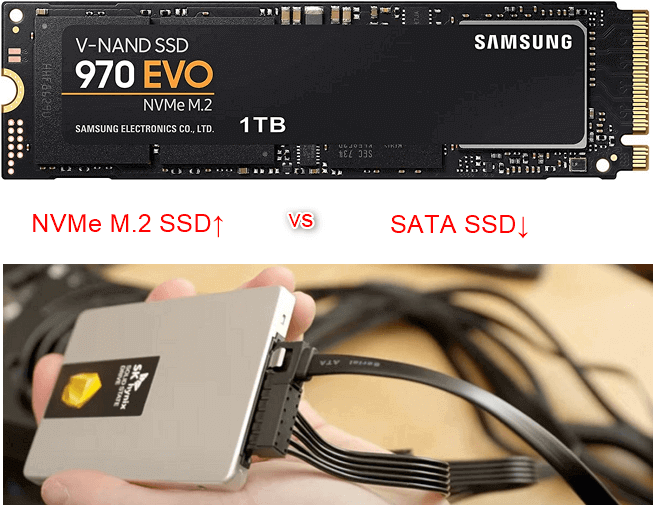 Every coin has two sides. Compared with HDD, one prominent con of SSD is the capacity. HDDs are currently available in capacities up to 4TB, whereas SSDs top out at around 2TB. There are larger SSDs, but you need to spend way too much money than buying an HDD of the same size.

Checking out on Amazon, the capacities of the SSD vary from 119 GB & under to 2TB & up. That means most of the users are buying SSDs larger than 119GB and smaller than 2TB. You can choose a proper one according to your demand and budget.

Some guides might take the price as an important factor that would have an impact on users' decision-making when choosing between SSD and HDD. But in 2022, the price should not be a big problem. In one aspect, SSD is not a new hit anymore, so it costs less these years. On the other hand, high-capacity HDDs are still expensive, it costs users several hundred dollars to buy. On Amazon, SSDs are generally priced between $50-200. You can get a good hard drive in this budget.

Not just buying SSDs, but in fact, when buying any equipment, we recommend you choose big brands that are trustworthy and have after-sales service. In this way, not only the quality of the SSD you buy is guaranteed, but also when you encounter problems such as not knowing how to install the SSD, the SSD is damaged, or there are bad sectors, there are professional customer service or user manuals available for inquiry and reference.

Once you've decided to buy an SSD, you should know that it is significantly faster than HDDs. But what exactly is the speed of SSDs? Here's the answer. The standard SSDs perform the same action at speeds of 500 MB/s, and newer NVMe SSDs can even show speeds of up to an astounding 3,000 to 3,500 MB/s. That means if you want to transfer a 20GB file or clone a 20GB HDD to an SSD, it will only take less than 10 seconds, while in an HDD, it would take at least 2 minutes.

SSDs consume less power than HDDs, which can be beneficial if you're looking to extend the battery life of your laptop. The power consumption of each SSD varies based on its construction and the technology used. Typically, however, a 2.5" SATA SSD will draw 5 volts (voltage) and about 1.5 amps. So the total power usage can be 7.5 to 8 watts.

Ultimately, the decision of which SSD you should pick depends on your needs and preferences. We don't think there is one perfect SSD, but only the most suitable SSD for your needs. But please remember, anytime you want to buy an SSD, check this guide and think about the factors: size, capacity, price, brand, performance, and power consumption.

What Are the Different Types of SSDs?

Actually, when searching for SSDs on Amazon or Best Buy, you can see that there are not just SSDs, but several different names of SSD with a prefix, such as M.2 SSD, NVMe SSD, etc. And these are the different types of SSDs.

SSDs are usually classified by connector type. Common SSD types on the market include SATA SSD, M.2 SSD, PCIe SSD, etc. And SATA, M.2, and PCIe are the name of the connectors. For consumers, the most common options are SATA and M.2. SATA is known as the old two-connector system used by hard drives, including SATA power and SATA data cables. SATA-based SSDs are best for older computers that lack the newer SSD connector types and only have SATA connections.

Another common type of SSD is NVMe SSD. NVMe is short for Non-Volatile Memory Express, it is a new controller to replace AHCI or Advanced Host Controller Interface. AHCI is the SATA bus traditionally used by hard drives to connect the hard drive and the controller of the computer to which it is connected. NVMe promises to reduce latency by operating at greater efficiency, combined with the parallelization capabilities of SSDs, which are capable of running more than two thousand times more commands to and from drives than drives on AHCI controllers.

The Solid State Disk (SSD) has greatly improved the computer performance, and more and more users would consider giving up Hard Drive Disk (HDD) and turning to SSD. In recent years, a newly raised hard drive called NVMe SSD seems to be a strong competitor of SSD. What's the difference between these two kinds of hard drives, and in what ways do NVMe hard drives outperform SSDs?

The Bottom Line - How to Choose the Right SSD

All in all, choosing the right SSD is the process of requirement matching. Some might be less expensive but smaller in storage. Some might be more expensive but greater in performance and durability. You can choose the one that meets your demand the best. No matter which SSD you decide to buy in the end, please make sure to buy it from official channels such as the official website, Amazon flagship store, etc., so that the quality and after-sales service of the SSD can be guaranteed.