All Things You Should Know About RAID 1

RAID 1, also known as Disk Mirroring, works to organize the disks in pairs. Here in this article, you will learn almost everything that you should know about RAID1. In addition, if the RAID 1 installed on your computer unfortunately fails and all the files and documents stored on it are suddenly gone, you can use this article as a reference to restore the significant data by using the EaseUS Data Recovery Wizard.

RAID 1, with its full name known as "redundant array of independent disks," belongs to one of the RAID data storage technology modes. As a commonly used technology, RAID 1 aims to improve your devices' reliability, capability, and performance and help avoid various faults and errors. When you are using RAID 1, a copy, or what is called a mirror, will be made on two or more disks, which improves the efficiency of securing data and increases the speed of reading, writing, and access. 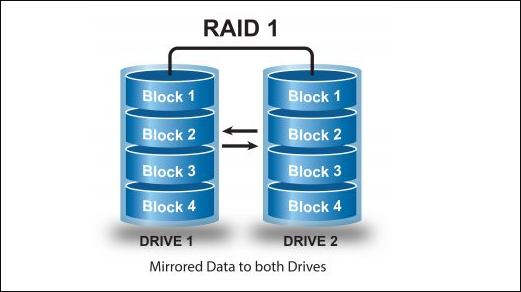 Some levels of the RAID technology can be combined into a two-digit RAID level to achieve higher data storage performance from the hard drive disks. Take RAID 10 as an example. As can be seen from the spelling of its name, it can be easily known that it is the combination of level 1 plus level 0, which makes it also called RAID 1+0. 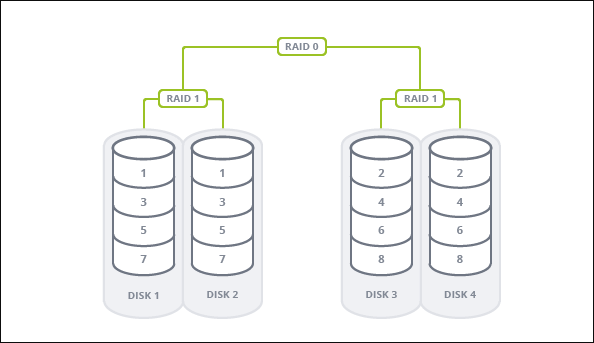 Such a combination allows RAID 1+0 to own both the mirroring and striping functions. Mirroring allows data to be written to two or more disks simultaneously. If one of the disks fails, the data from the failing disk will be preserved by the mirror image. The striping function ensures that the data can be written into various drives in sequential order by dividing that data into small pieces. It is the perfect combination of level 1 (Mirroring) and level 0 (Striping) that makes the RAID 1+0 works well in enhancing the performance of accessing data.

Performance and Key Features of RAID 1

RAID 1 not only functions well in improving the efficiency and performance of your devices but also lowers the risks of data loss. Sounds great, doesn't it? However, if you wish to try RAID 1 on your computer, it is recommended that you learn more about its performance and its key features. The information below may help you achieve this.

RAID 1 has three main functions to help users implement it in both their homes and workplaces.

If you have applied the RAID 1 in the right place, it will not let you down. Usually, it can be used in the following three scenarios:

It is the advantages of RAID 1 that help it gain a lot of users and enjoy a good reputation. The following are some typical benefits of using it.

The RAID 1 also has some disadvantages that may make it look less perfect.

Differences Between RAID 1 and Other RAID Levels

RAID data storage technology has a total of six basic levels. By comparing RAID 1 with other RAID modes, you will have a better understanding of it. If you are not sure which RAID level is most suitable for you, you can take the following comparisons between RAID 1 and other RAID levels as a reference.

One of the major differences between RAID 1 and RAID 0 is that the former is responsible for replicating data across two or more disks for better redundancy, while the latter is dedicated to dividing data across various disks to allow data read and write operations to be executed simultaneously. 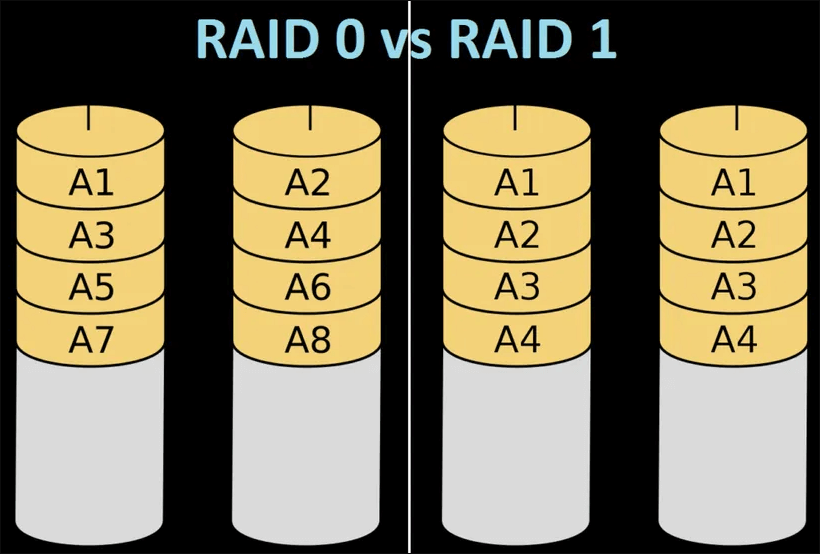 Let's learn more about the difference between the two regarding the highlights and drawbacks of each.

According to the differences above, it can be seen that RAID 1 and RAID 0 work well in different situations. Generally speaking, if you prioritize performance over data redundancy, RAID 0 may be a better choice; if you need to deal with mission-critical data, then it is recommended that you try RAID 1.

Like RAID 1, RAID 5 also provides fault tolerance. The difference is that RAID 5 offers fault tolerance by employing parity and checksum, in which data is striped and stored uniformly across all drives, while RAID 1 achieves this by using mirroring.

Compared with RAID 1, RAID 5 has the following advantages and disadvantages:

After comparing the differences between RAID 1 and RAID 5, have you already made an ideal choice for yourself between the two RAID levels? The RAID 1 will be a better level if you just want to use a simple implementation, while RAID 5 can be more suitable for a rather complicated system since the underlying technology in each implementation may differ.

Although both RAID 10 and RAID 1 employ half of the available drives for data, there is still one significant difference between the two: the number of drives that can be used in a RAID group. Only two disks are replicated in RAID 1 to offer redundancy in the case of a single disk failure. Differing from RAID 1, RAID 10 is a RAID 0 stripe built with two or more RAID 1 mirrors and requires at least four disks.

Since RAID 10 equals RAID 1 plus RAID 0, the capabilities of the two levels are integrated into the RAID 10, offering both fault tolerance and improved performance. Compared with the RAID 1 level, RAID 10 has the following benefits and drawbacks.

Although RAID 1 is able to store and back up data with a high fault-tolerant feature, the data may lose due to disk failure, rebuild, and format. If you really come across a data loss problem, how can you restore the data stored and backed up in the RAID 1? No worries, it can be pretty easy and quick to recover those significant data if you have downloaded EaseUS Data Recovery Wizard.

As a professional RAID 1 recovery program, this specialized data recovery software has been widely used by numerous individuals from different countries and gained a good reputation due to its powerful function in recovering deleted files or lost data.

If the RAID 1 installed on your devices is unfortunately broken and the data restored in it are lost, the following step-by-step tutorial can be taken as a free reference for RAID 1 data recovery.

If EaseUS data recovery software fails to recover lost or deleted files and documents on the RAID, it is suggested you try the manual data recovery service provided by the EaseUS support team.

A RAID calculator is often used for the optimization of the storage utilization of different RAID levels. For each RAID type, the RAID calculator will automatically calculate the number of hard disks required. If any disks are withdrawn from the set, the calculator will recalculate how these changes affect each RAID type's capacity and performance. Such a powerful feature allows its users to effortlessly switch between different disk configurations.

There are four types of RAID calculators in total:

In addition, by using a RAID calculator, you can enjoy the following benefits:

The RAID Calculator has different requirements for different RAID levels, as is listed below.

RAID 1: Requires an even number of at least 2 drives

RAID 10: Requires an even number of at least 4 drives

As one level of the redundant array of independent disks, RAID 1 functions well in improving the performance, capacity, efficiency, and fault tolerance through its mirroring feature. By comparing it to other levels of RAID, it can be found that different RAID modes suit well in different situations and you can try to choose the most appropriate one for yourself based on the information above. If the RAID fails and all the files and documents stored in it are suddenly lost or deleted, you can recover the lost RAID data with EaseUS specialized data recovery software.