If you want to clone SSD to M.2 but don't know where to start, this page will help you out. It's a perfect beginner's guide, telling you what you should do from the beginning to the end. Most importantly, we have recommended a great tool - EaseUS Todo Backup. You can simplify the cloning process with its clone feature.

#1. Preparation: Backup Files and Remove Other Disks
#2. Convert the Old SSD from MBR to GPT
#3. Change the Boot Mode from Legacy BIOS to UEFI
#4. Clone SSD to M.2 SSD
#5. What to Do After Finishing the Clone

"I need to migrate Windows 10 OS from SSD to M.2 SSD which I newly bought. But I've never done this, need some suggestions about how to quickly migrate OS to M.2 SSD. Any idea I'd love to hear."

Cloning the old SATA SSD to the new M.2 SSD is a bit difficult for common users. And there will always have various kinds of problems during the process. In this post, we will introduce the detailed procedures of how to clone SSD to M.2 SSD from beginning to end as well as several third-party tools which could help you ease the process.

SSD is a type of data storage device that uses integrated circuit assemblies as memory to store data persistently. They typically contain no moving parts, which makes them faster and more rugged than HDDs. The three most common types of SSDs are M.2 SSDs, NVMe SSDs, and PCIe SSDs.

Among all, M.2 SSD is the most popular. When you got a new M.2 SSD for improving the computer's performance in startup and launching programs and games, you can consider migrating the operating system directly from the old hard drive to M.2 SSD without reinstalling. Take it easy, and head to the below part of the complete guide of M.2 SSD OS migration.

First of all, make a backup of all your important files and data. You can back up the data to a cloud drive, or to an external drive with backup software. It's really important! No one can ensure data safety during the cloning process.

Then if there are any other drives on your computer, please unplug them in case you format these drives by accident.

#2. Convert the Old SSD from MBR to GPT

As we've mentioned before, if your old OS SSD is an MBR, then it is highly possible that you would fail when you reboot your computer and get the Inaccessible Boot Device errors. So here we'd like to recommend a handy tool - EaseUS Partition Master, for you to convert your SSD from MBR to GPT in simple steps. For detailed steps, please refer to How to Convert MBR to GPT.

#3. Change the Boot Mode from Legacy BIOS to UEFI

After you've converted the old SSD to GPT, you need to change your computer's boot mode to UEFI. Here are the detailed steps:

Step 1. Restart your computer, press the corresponding key when you see this message: Press [key] to enter setup. It could be F2, F12, or DEL. The message might vary from your computer brand.

Step 2. In the BIOS Setup Utility, select Boot from the top menu bar.

Step 3. Select the UEFI Boot Mode field and use the +/- keys to change the setting to UEFI.

Now it comes to the steps of cloning SSD to M.2 SSD. You can clone it by yourself, but there are many third-party tools that can ease the mission. Here we recommend the clone feature of EaseUS Todo Backup. The cloning feature in EaseUS backup software makes it easy for you to migrate the system to a new disk and upgrade your current system.

You can also watch this video to see how to clone SATA SSD to M.2 SSD.

#5. What to Do After Finishing the Clone

Way 1. Turn off your computer, unplug the old SATA SSD and replace it with the new M.2 SSD, then turn on your computer again.

Way 2. If your computer can have two hard drives, you can keep both the two SSDs on your computer. Restart the computer, enter BIOS Setup Utility, change the BIOS settings to boot from the new M.2 SSD.

Additional Help - How to Replace the Old Disk with M.2 SSD

After you have cloned your Windows 10/8/7 to M.2 SSD, you can replace your old disk with the cloned M.2 SSD. Here are the steps to replace the old HDD. Here is an example of replacing the OS disk with an M.2 SSD.

Step 1. Turn your laptop off and then disconnect both the power cable and any other connected cables. Then unscrew the back panel and remove it to get access to your OS disk.

Step 2. Use your tools to secure your drive to the laptop. You'll need to unscrew those before you can remove the drive.

Step 3. Lift the old drive up about 30 or 45 degrees and pull it out. In its place, install the SSD and put the back panel on.

Step 4. Boot up from the M.2 SSD. Turn your laptop on. If your laptop boots as normal and you see all of your programs and settings just the way they were before (except much faster), all went well. 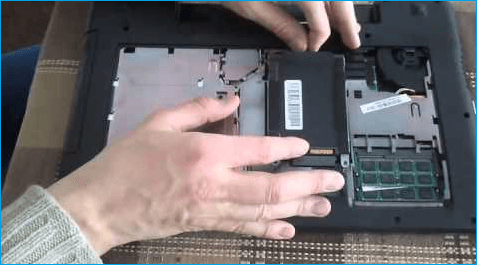 If you want to continue using the old disk for saving data and protecting the Windows system, you can format the old hard drive for free.

You can clone OS to M.2 SSD easily with the help of EaseUS backup and recovery software. In order to clone your Windows OS successfully to an M.2 SSD, you need to check that the new drive is compatible with your PC's motherboard and carefully install the drive correctly.

How to Clone SSD to M.2 FAQs

You may have extra questions after cloning Windows operating system to SSD. Read these questions and answers below to get additional help.

No, both SATA and PCIe M.2 SSDs will use the standard AHCI drivers built into the OS. However, you may need to enable the M.2 SSD in the system BIOS before being able to use it.

M.2 was developed by the PCI-SIG and SATA-IO standards organizations and is defined in the PCI-SIG M.2 and the SATA Rev. 3.2 specifications. It was originally called the Next Generation Form Factor (NGFF), and then formally renamed to M.2 in 2013. Many people still refer to M.2 as NGFF.

4. How do I transfer data from SSD to NVMe?