Clone GPT Disk in Windows 10 - This Method Would Work!

Have problems with the Windows 10 GPT disk clone? Don't worry! This page offers you a step-by-step guide to clone GPT disk in Windows 10. It just takes 3 simple steps.

It is more difficult to clone a GPT disk in Windows 10 than clone the MBR partition disk. Sometimes, you might receive an error message that says the winload.efi was missing from Windows when you try to boot from the disk, even you have done a successful GPT disk clone job. In view of this, on this page, we would like to introduce you to third-party cloning software - EaseUS Todo Backup, which allows you to easily and safely clone GPT disk in Windows 10. It is helpful for users who do not want to invest in expensive cloning software that they'd probably only use one time.

EaseUS Todo Backup offers users full backup and clone solutions in different cases. Providing multiple versions, the program can serve different types of users including home users, server users, company users, and business users. You can choose the right version and learn how to use it to clone GPT disk in Windows 10 with simple steps.

Tools you need: a screwdriver, a Power Splitter Adapter cable, a SATA cable or an USB to SATA adapter. Make sure the target HDD/SSD is larger than the used space of the current drive. For M.2 SSD, you need to idenfity if there is a PCIe slot for connection.

EaseUS Todo Backup is the cloning software that integrates multiple functions, including system/disk clone, backup, restoring , and system transfer, etc. In the disk clone field, this tool stands out due to the following aspects:

03. Get Ready with the Clone Procedures

04. Boot from the Clone Hard Drive

Option 1. If you want to keep both the old disk and the new disk

Option 2. If you want to only keep the new disk

Bonus Tip: What's the Difference between GPT and MBR

GPT is short for GUID Partition Table. It is the standard layout of the partition table of physical computer storage devices such as HDD/SSD. Due to the limitation of the master boot record (MBR) partition table, it forms part of the Unified Extensible Firmware Interface (UEFI) standard and is also used in some BIOS systems. 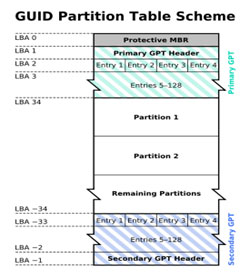 After knowing what is a GPT disk, then we'll tell you the outstanding features of GPT. Compared with the MBR disk, GPT disk has two prominent advantages:

2. GPT breaks the limits of MBR.

The storage capacity of GPT disks is much larger than that of MBR disks, allowing users to create an unlimited number of partitions. Please note that if it is a GPT system disk, you can create up to 128 partitions.

Now you've know the easiest method of how to cloning a GPT disk. Download EaseUS Todo Backup now, you can clone the GPT disk on your own. What's more, it can also help you