What Happens to the Data on an SSD When the Power Is Lost?

While we know that if a power is cut off, a mechanical hard drive can easily fail, especially if there is a work in progress. But what if the same happens to SSD drive? SSDs are also prone to failure or data corruption, even with no mechanical parts. In this process, we are looking at a detailed analysis on if a power loss causes data loss on SSDs? Besides, you can recover SSD data with EaseUS data recovery software.

A sudden power outage can have severe consequences for your devices, particularly computers. It can cause data loss on all storage devices, including HDDs, SSDs, and flash drives. Even though SSDs have extremely fast read and write speeds, a power outage can result in data loss during any operation. This issue was very significant in mechanical hard drives, but after introducing SSDs, the number of complaints has gone down. Since there are no mechanical parts in an SSD, it has surpassed traditional mechanical drives in recent years. 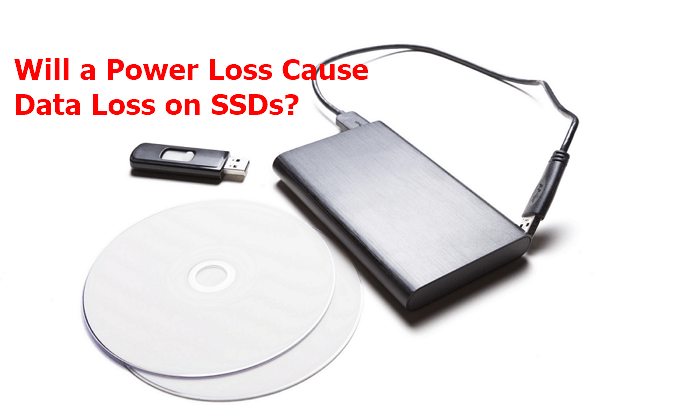 High-speed data transfer in SSDs is also beneficial to users, but the question of data retention remains. What happens if the power goes out unexpectedly, and what happens to the data on the solid-state drive?

Will a Power Loss Cause Data Loss on SSDs

When your system's power goes out unexpectedly, various scenarios can occur. When the shutdown process is initiated usually, the ATA driver sends a command to the SSD called Standby Immediate Command. The only purpose of this is to notify the drive that a shutdown process has begun and that the power supply will be turned off soon. When the drive realizes this, it begins clearing its cache and updating its mapping tables. The power will not be turned off until the SSD completes all pending tasks.

But what if it does? Three significant possibilities can occur. Let us take a look at them one by one:

It is the best-case scenario where nothing happens to the drive. It is the most common thing to happen when the power goes out suddenly. With the introduction of SSDs, the cases of data loss due to power cuts has declined.

Most of the time, the user turns the computer back on after the power returns, and all the things end up being completely normal as if nothing happened. You can pick up your work where you last left off. It is mainly because the tech behind drives has gotten more innovative, and they save work more often than ever.

However, this isn't always the case. Sometimes, the user has to face serious consequences due to power failure.

Also read: How long will an SSD last?

2. There's Some Data Loss on the SSD

In this scenario, instead of having no data loss, the user might experience some fractional data loss or data corruption on the drive. It often takes place when an ongoing process is in progress, more likely a file to be written at the same time when the power goes out, resulting in data loss.

The file system may notify you about the fragments of data missing, you may lose files, or other issues might arise. Even if you're using a solid-state drive or a mechanical drive, it can happen.

While the chances are less, it is still possible to have a massive data loss due to a sudden power outage. Suppose the computer performs a write operation of a very critical piece of information. In that case, if the power goes out, it can likely result in the loss of essential data.

There are pretty drastic measures taken while building these devices to withstand this type of extreme situation without harming any data or physical damage to the system. Data corruption or data loss is the biggest issue in most cases, but it is possible to fully recover the lost data from drives. Special utility software like EaseUS Data Recovery Wizard offers a wide range of features to recover deleted data from drives. Let us discuss it in detail.

How to Stop SSD Power Loss and Save Your Data

Till this point, you must have an idea of what is at stake. Losing crucial data due to a mere power outage is not something anyone wants. It is always a good idea to keep backup power to your PC or server. Even in case of power loss, you will have enough time to shut down the computer. It will make sure the SSD controller has enough time to properly shut down the drive. If you have a large copy or installation in the process when power outages occur, it is best to cancel it for the time being.

But, apart from that, several other ways can trigger data loss in an SSD, and knowing them is equally essential for you, Here are the given factors that can impact a solid-state drive badly:

When it comes to HDDs and SSDs, the most apparent distinction is the presence of moving parts in HDDs, which makes them more susceptible to physical damage. On the other hand, SSDs do not have any moving parts, but they have soldered parts that can easily break if the manufacturing process is poor. So when buying an SSD, make sure to check for any physical defect. You can even shake it a bit to figure out any loose component inside it.

SSDs do numerous logical operations while performing a task. But its logical capabilities can easily be hindered by a virus or malware attack. Bad sectors can also be a cause of logical issues in SSDs. So, make sure you have security software on your PC.

Not only humans but electronic devices are also very prone to accidents, most of which involve human error. In many cases, users have dropped their SSD into water or on the bare ground resulting in significant internal damage, causing massive data loss and corruption.

How to Recover the Lost Data on SSDs Easily

Now that we've discussed all the major reasons for losing data let us discuss how to recover them. It is not the end of the world if your SSD is corrupted or has lost all its data. EaseUS SSD data recovery software can still recover it. It is an all-in-one data recovery tool for windows. You can get back all your accidentally deleted files, even from damaged or corrupted drives, which is the case in our scenario.

It only takes three steps to recover data from an SSD completely. Make sure to recover to an external drive instead of the same drive.

Compatible with all storage devices

No matter what the device is, whether it is an SSD, HDD, SD Card, Flash Drives, USB drives, Pen Drive, this software is compatible with all.

EaseUS Data Recovery Wizard is used for data recovery from damaged systems. It is also perfectly effective in data loss issues like virus attacks, human error, and power failure, which is precisely the case we discussed in this article.

Even if the drive has been formatted, the software can recover data from it. Apart from this, disks with initialization issues, improper partitioning, access denied SD drives can also be used. You can visit their official site to download the software. Then, recover data with this software.

These issues cannot be predicted and happen unannounced. The best thing that you can do to keep the damage to a minimum is to create a proper backup of all your important data. Creating an appropriate backup ensures your data's safety if your primary drive fails. Hence, creating an additional backup for your SSD is highly recommended.

You can use third-party backup software or use the built-in method. If the backup doesn't suit you, make sure to keep everything on the cloud.

In this article, we've discussed all the major reasons regarding data loss in SSD due to power loss. Several other reasons can have adverse effects on your SSD. To protect your system and drives from mishaps, we've recommended EaseUS Data Recovery Wizard.

Not only is it beneficial for recovering the lost data from a damaged drive, but it can also protect your PC from other malfunctions. You can easily download the software from their official website and try it free. We hope that this article was helpful to you.