Updated by Gemma on May 07, 2022
Written by Tracy King
About the Author 

System Image is a replica of the system drive or a complete drive. What makes it different from standard backup or copy is that you can use it on any other drive and make another PC running in no time. It offers more than backup but doesn't replace it.

The good news is that creating a system image is easy and is also offered as a built-in feature in Windows, but then there is additional software that can enhance the experience. This post will show you to create system image backup and how it differs from backup.

What Is System Image

Technically, System Image is a serialized state of a computer system or drive which can be used to create multiple copies and attached to another computer in no time. The image includes the state of the OS, applications, activation status, browsing history, device drivers, PC settings, and so on.

1. Is the system image the same as backup?

Technically no, but it can help restore the PC to the state when you created the System Image, the same as if you created a backup. However, unlike backup, a System image cannot be incremental and needs to be made from scratch.

Instead, the backup system can be updated by changing only what has been modified or deleted, but it can never be used to bring back the PC to its original state without installing Windows. That is the substantial system image vs. backup difference.

2. What can a system image backup do for you

It can help you switch hard drives, transfer PC, deploy the same setup on multiple computers. A system image should be created when everything is updated, you have the list of apps installed, and you are sure this is what you want if you had to restore.

3. When do you need to create a system image backup

System Image Backup can be created anytime. There is no rule, but they are typically created when the system is stable, or when you are about to upgrade, or when you are moving to a new PC and do not want to install everything again.

4. When to use a system image backup

It can be used in various situations such as a PC crash, upgrading multiple computers using the same image. Using this, you can completely restore your PC, Settings, and applications.

How Do I Create a System Image? (Multiple Methods)

A system image can be created in three ways: with professional software such as EaseUS Windows Backup Software, through Windows Backup and Restore, and through File History. This works on Windows 10, Windows 8, Windows 7, and any other version of Windows.

Pros: More options compared to the standard Windows features as it combines both System Image and File Backup into one place. You also have better control over the backup.

Cons: Trial is limited but displays the potential of the software.

As soon as the software is installed, you can select a disk, system, or file or create a clone using the wizard. You will have full control over the files you want to backup. You have the option to restore the files if necessary.

Step 2. Among the four available categories, click "OS" to start back up.

Step 3. The system partition will be automatically selected, you only need to select the location.

Step 4. Local Drive, Cloud, and NAS are available for you to save the backup file. You can also connect an external hard drive to preserve the system backup files.

Step 5. You can customize the settings in "Options" at the left bottom. After that, click "Backup Now", and the process will begin.

This is the official method to create a System Image in Windows. You can reuse it on the same or a new PC since it creates a replica of the system drive. It saves a lot of time which one would have to spend reinstalling software, driver, reactivating software, and setting up user files again.

Pros: It can be used to recover PC in case of a system crash and a faster way to bring everything back to as it was before.

Cons: You need to manually create an image, and it takes more space than the usual backup methods.

Step 1: Open the Windows Settings (Win + I), then navigate to Update & Security in the left navigation pane and select the Backup & Restore option.

Step 2: In the Backup Restore section, click on Create a System Image link in the left panel. Once the Wizard is ready, you have three options—Hard disk, DVDs, and set up a network location. 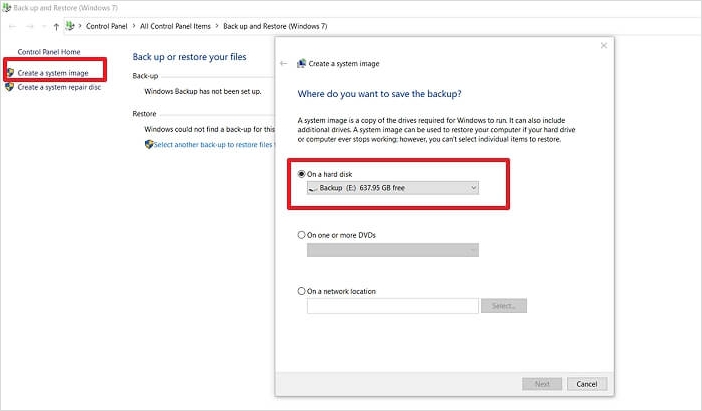 Step 3: Connect a hard drive where you can save a system image. Please select it from the dropdown, and then click on the Next button. Let the wizard completes the job, and the system image will be saved into the path.

The File History feature saves copies of your files so you can get them back if they are lost or damaged. It is similar to any backup method where any change in the file is quickly synced back. It also offers version history, which allows users to bring back the old version when needed.

Pros: It is very easy to use and can take regular backup of selected files as they are modified.

Cons: It cannot be used to bring back the OS if there is a crash.

Step 2: Connect the hard drive, and then it should appear in the list of connected drives in the File History section.

Step 3: Click on the Turn on the button, and it should start making copies of files at Libraries, Desktop, Contacts, and Favorites or anywhere else which is selected. 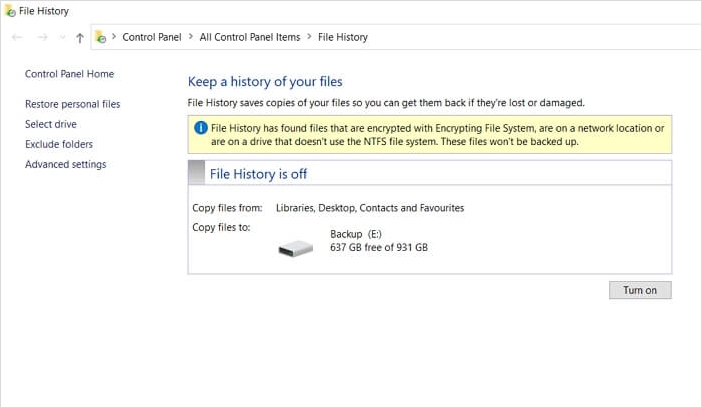 If you are using both Method 2 and Method 3, keep a separate drive for each of them. Compared to this, backing up files to OneDrive makes more sense, especially if you are using Microsoft Office 365.

Now that we know what a System Image means, the multiple ways to create a system image, take backup, it's clear that creating a system image is crucial. So, if you have till now, make sure to ahead and create one of your PC. It is important that when you create a backup or system image, you don’t save it on the same computer. Instead, you should save it on an external drive or a network location.

That said, while Windows offers a built-in tool to create a system image, and file backup, it is better to use professional backup software such as EaseUS Windows Backup Software, which offers more flexibility, encryption, scheduler, and so on.