What is the Thinking Behind 32GB Windows Format Limit on FAT32?

The Real Thinking Behind 32GB Windows Format- The Engineer's Answer

The real thinking behind the Windows 32GB format limit on FAT32 was done by Dave Plummer, a Microsoft engineer, in the 1970s. Plummer pondered what cluster size to use with a deep consideration of Windows' future users. His options were to define the appropriate volume size since the FAT32 file system already contained the maximum number of clusters.

He considered it a waste of space to use FAT32 on large volumes. If he attempted to increase the cluster size, it would also need an increase in volume, which would be costly and a waste of valuable space. His option was, therefore, to choose a 32-kilobyte cluster size that would leave behind no little space, even when it stores the smallest file with a few bytes.

His real thinking behind the 32GB Windows format limit on FAT32 was to promote its efficiency by minimizing the unnecessary space left after storing some data. You can know more about the thinking via the YouTube video made by Dave Plummer.

FAT32 is a version of the File Allocation Table(FAT) that uses 32 bits of data to identify data clusters within a given storage device. FAT32 is most common since its compatible with different devices, including:

If a drive failure occurs, FAT32 will move the root directory to a new location and use the backup copy. FAT32 is also known for reducing cluster waste since it uses smaller cluster sizes in situations where the drive capacity is small, and any reduction could be meaningful. 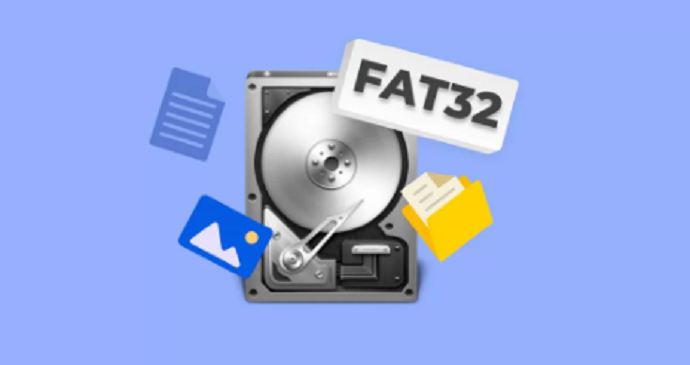 The Influence of 32GB Windows Format Limit on FAT32

Microsoft chose 32GB as the maximum partition size for a FAT32 file system. The main reason for this was to promote its new file system (NTFS), considered more efficient when working with large partitions. Despite that, the 32GB limit on FAT32 has influenced the file system differently. These include the following:

Despite the many limitations of the 32GB Windows format on FAT32, you can still find ways to break the barriers using third-party tools or command prompts.

The Real Reasons for 32GB Windows Format Limit on FAT32

Plummer says that the 32GB Windows format limit on FAT32 hasn’t been changed by anyone because "I said so." Although it was his personal decision at the time, he still believes he did the right thing. When testing the maximum file limit to apply on FAT32, Plummer argues that the largest memory card at his disposal was 16MB.

He, therefore, used this capacity when testing the FAT32 file system that he had created as an engineer at Microsoft. He multiplied the 16MB capacity by a thousand and then doubled it to obtain the maximum file size that could forever work for any device running on NT 4.0. He, therefore, picked 32GB as the limit.

Plummer also asserts that he based his decision on the theory that 16TB is currently the maximum volume size for a file system. If other developers changed this value, it could drastically override the presets, including FAT32. Developers had to stick with the decision made by Plummer (of limiting 32GB format to FAT32) to avoid any conflicts with the file system already in existence.

This is, therefore, the real reason for the 32GB Windows format limit on FAT 32 to date.

How Can You Break the FAT32 File Size Limit?

The easiest way to break the FAT32 size limit is to use the command prompt because it’s available for most Windows computers. With the command prompt, you can solve Windows boot issues, manage disks, and execute batch files. Command prompt can help your break the limitations of FAT32 by converting it to NTFS through the following steps:

3. Next, type “help convert” and press the Enter key. 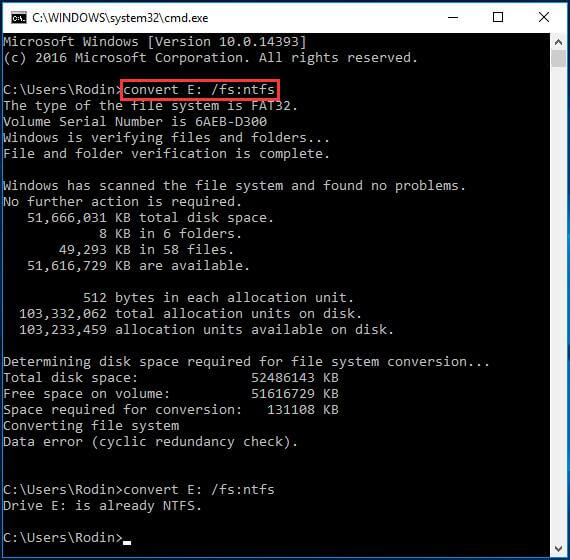 5. Once the conversion process is complete, type Exit to quit the process. You've now converted the FAT32 partition to NTFS; hence no further limitations concerning the 32Gb file size.

Note: Once the conversion process completes, you will likely see an error message: “Data Error (cyclic redundancy check).” However, this should not worry you much since you’ve already converted your partition to NTFS.

You’ll need to go to Disk Management and check the error. Something else to note is that once you’ve converted your FAT32 to NTFS, the process is irreversible. You should therefore be cautious about this issue.