In the vast sea of memory cards, how do you tell which memory card you should buy, or put it in use for a certain type of digital device? Given that you've been already mixed up in your mind with their names, e.g. CF card, TF card, SD card...

Don't worry, we know exactly what you want to know. So, in this article, we'll revolve around two types of memory cards: TF card and SD card, to make a profound comparison, and answer the most frequently asked questions for you.

1. What Is A TF Card
2. What Is An SD Card
3. What's The Difference Between TF Card and SD Card
4. How Does TF Card Work on Mobile, GPT, Dash Cam, etc.
5. How to Take Care of Your CF Card in Daily Use

What Is A TF Card

For mobile phone users, it's not strange to see a very tiny and thin extensible memory card, and that' s called a TF card.

A TF card is the smallest memory card in size, we can say that. TF represents TransFlash, which was jointly developed by Toshiba and SanDisk in 2004, and later the name was changed to micro SD card after the acquisition of the SD Association at the end of the same year. TF card then officially became a member of SD products.

You see, Motorola was the first mobile phone to contain a TF card. A few years later, its competitors began using microSD cards as well. The modern Android phones are gradually giving upon such expandable storage, but Samsung still adopts a micro SD card these days. Though the TF card is rarely seen on mobile phones, it shows up on other compact digital devices, such as dashcams, flying drones, or GPS devices.

Thereof, the following names/texts all suggest the very type of TF card:

What Is An SD Card

Earlier born than the TF card, the SD card (namely Secure Digital Card) is released in August 1999, by Panasonic, Toshiba, and SanDisk. It's a new generation memory device based on Semiconductor Flash memory.

When it comes to talking about how to choose an SD card, many of us tend to include a microSD card in this category. You should not mix the two concepts again because the microSD card is a de-facto TF card, and it differentiates the SD card by the heading "micro" in the first place.

Admitting that SD card is ultra-small, portable and lightweight, it outranks TF card in dimensions and generally fits itself in some bigger digital devices, such as digital cameras, digital personal assistant (DPA), multimedia players, and sometimes a desktop or laptop has a slot for an SD card!

What's The Difference Between TF Card and SD Card

To get you quickly understand TF card vs. SD card, we reviewed 10 aspects to distinguish the two types of memory cards by their storage, size, price, etc. By figuring out the difference between TF card and SD card, you can decide which memory card applies to your case, and how to use it properly on your digital device.

TF card is a flash memory card, with other names that are familiar to us, T-Flash, TransFlash, and microSD.

SD is the abbreviation of Secure Digital, and it is a proprietary non-volatile memory card format. Due to many capacity standards up till now, there developed its derivatives, including SDHC, SDXC and SDUC.

TF card was originally put into the market in 2004 and it was not a member of SD products then. SD Association acquired it from Motorola and SanDisk in the same year. Other memory cards taken by SD Association include miniSD and SD cards.

Nowadays belongs to the same SD products of SD Association, but SD card is initially carried out by Panasonic, Toshiba, and SanDisk in August 1999.

On one hand, we can find out the difference by dimension. 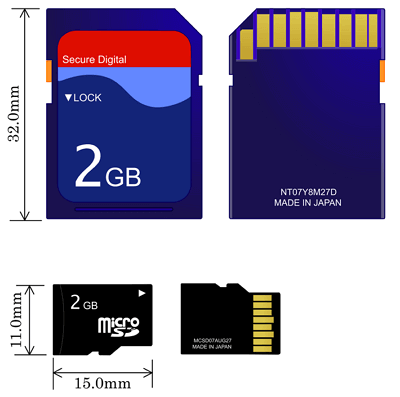 On the other hand, when you carefully look into the whole design you'll see the ribs* on the backside are also structured in a different distribution way. (Ribs can protect metal contacts to reduce the possibility of damage caused by static electricity or contact damage such as scratches)

Back onto the card design again. The prevalent SD card is usually designed with a lock switch while the TF card is not. It's called a write protection switch. By sliding the switch to the "Lock" position can protect data from being modified or erased by others.

Hence, due to the lock switch design, the SD card is much more secure for data security. Nevertheless, if you want to secure the TF card which does not directly support a write protection notch, you can insert it into a full-size adapter which does.

SD card is a new generation of memory cards based on Semiconductor flash memory. Whereas the TF card a relatively small flash memory card that adopts the latest NAND MLC technology and controller of SanDisk.

On the contrary, you can turn a TF card to an SD card, with the help of a proper card adapter. Put the TF card into an adapter, your device will recognize the TF card without any problem.

TF card is mainly for mobile phones to expand storage. Thanks to its mini volume and increasingly enlarged capacity, it's more and more popular to see on some GPT devices, portable music players and other flash memory disks.

Being bigger than TF card, SD cards are generally used on quite a lot of portable digital devices, such as digital cameras, DSLRs, handheld game consoles, etc.

So far we can buy TF cards and SD cards on Amazon or other eCommerce websites with a range of capacities:

Theoretically, under the same manufacturer, brand, capacity, and speed, the price of an SD card is higher than that of the TF card.

How Does TF Card Work

By walking through the long comparison of 10 primary differences, I believe that you should have a clear brain now. But what is the best TF card on the market?

Basically, keep in mind what your requirement is, and this is an essential step to start browsing a shopping site and search for the desired product. If you're using a card for your mobile phone then it will work with almost all microSD cards, you can find one within budget. Don't deceive yourself buying those cheap and nameless products, or else you'll spend twice money to repair a damaged SD card to save data!

Another noted point to choose a satisfactory TF card is the "class speed". TF cards and SD cards have a different class rating from 1 to 10. The higher speed cards signify higher speed and performance. If you're not recording in 4K, the speed might not be so important, but a faster-fated card will still be useful if you're using the card to expand the storage in a smartphone or a camera because faster read and write speed means fluent performance, and that will make the device more responsive.

Considering the price and purpose of how to choose a right SD card, here comes the most critical process, how does TF card work on a certain type of digital device?

To make your phone, dashcam, drone or a GPS device correctly detect, read and write data on the microSD card, you need to format it to a proper file system. A file system controls how data is stored and retrieved. Without a file system, information placed in a storage medium will exist without significance.

What file system should you allot to a new card? SD Association offers a format utility for users to format a memory card, and you can refer to this classification to achieve the best performance regarding different capacities of the microSD card.

So far, the most commonplace microSD card is within 32GB on a phone, and a 2GB microSD card is for a dashcam. Extreme large size cards are usually for digital cameras. If you prefer a user-friendly, intuitive, and powerful disk format utility that supports all file system formats on a storage medium, EaseUS Partition Master is a good assistant.

Step 1. Find your SD card and right-click the partition you want to format and choose "Format".

Step 3. Click "OK" on the pop-up window to continue.

Step 4. Click the "Execute Operation" button on the toolbar, then click "Apply" to start formatting your SD card.

How to Take Care of Your CF Card in Daily Use

Memory cards are portable, which means you can take it anywhere and use it across different devices. In fact, to export pictures, videos or music from the TF card, you have to take it out from your cameras or phones and connect it to a PC/laptop, and most of the time, via a card reader/adapter. Do you know that this tiny card is prone to infect virus or develop bad sectors on it with many factors? Like improper daily handle, vibration, abrupt removal instead of safe ejection. Of cause, when it reaches its lifespan.

Those are thinkable factors that would bring your TF card into trouble. Besides, accidental deletion of files, as well as mistaken disk formatting, would cause a miserable data loss moment for you, are you willing to suffer from it?

You don't have to once you know how to take care of those happening events. Human beings are good at using tools to solve problems, so we are not going to suffer from the card corruption or data loss as long as we find the right tools.

Generally, some tutorials will recommend you to run CHKDSK to check your disk error, but there is a simple tool to use.

If command line is not your ideal choice, you can apply this command-line alternative tool - EaseUS CleanGenius. Use this one-click tool to fix the file system error on your hard drive.

Step 1. Download EaseUS CleanGenius on your computer for free.

Step 2. Run the software. Click "Optimization" on the left panel, and then choose "File Showing" . 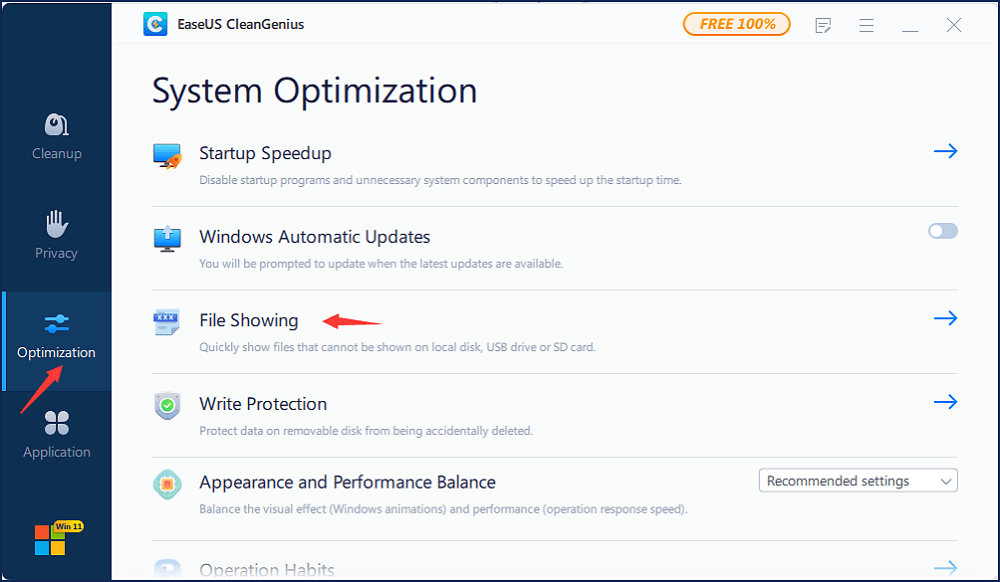 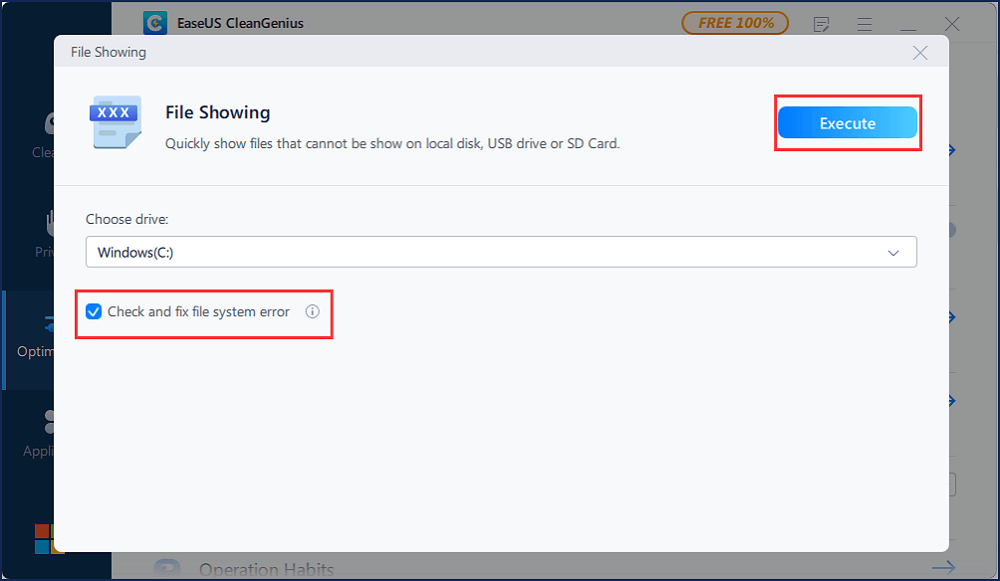 Step 4. Wait the EaseUS CleanGenius completes the repairing process. After that, click the "here" to view the result. 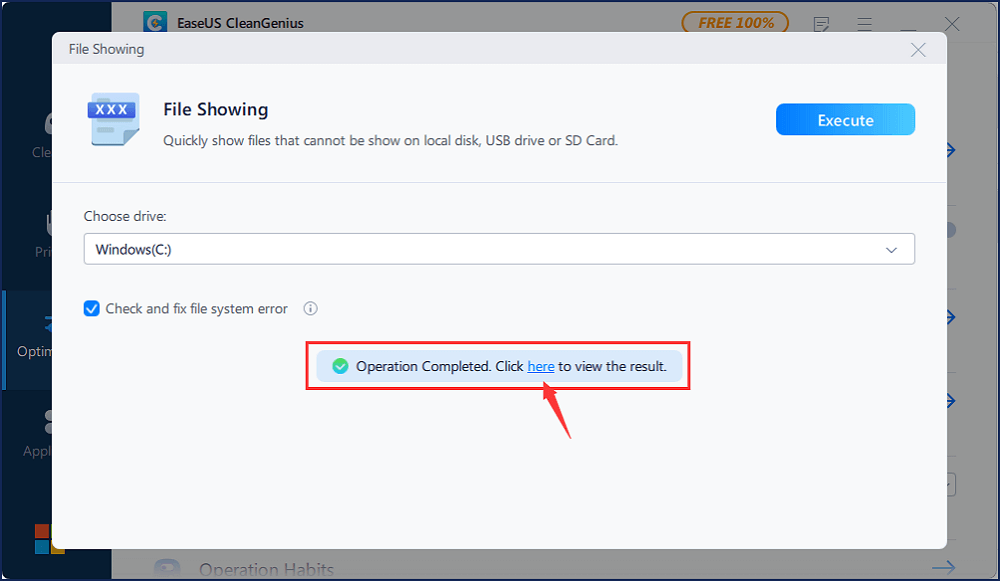 2. Recover deleted or formatted data from a TF card

EaseUS Data Recovery Wizard is recognized as the first-class TF/micro SD card recovery software on the market for over ten years. It's been optimizing the data scanning and analyzing technology since the first release in 2004, and thanks to its advanced algorithm of tracking data files on every sector, it has helped millions of customers all over the globe retrieve lost files with the highest success rate. 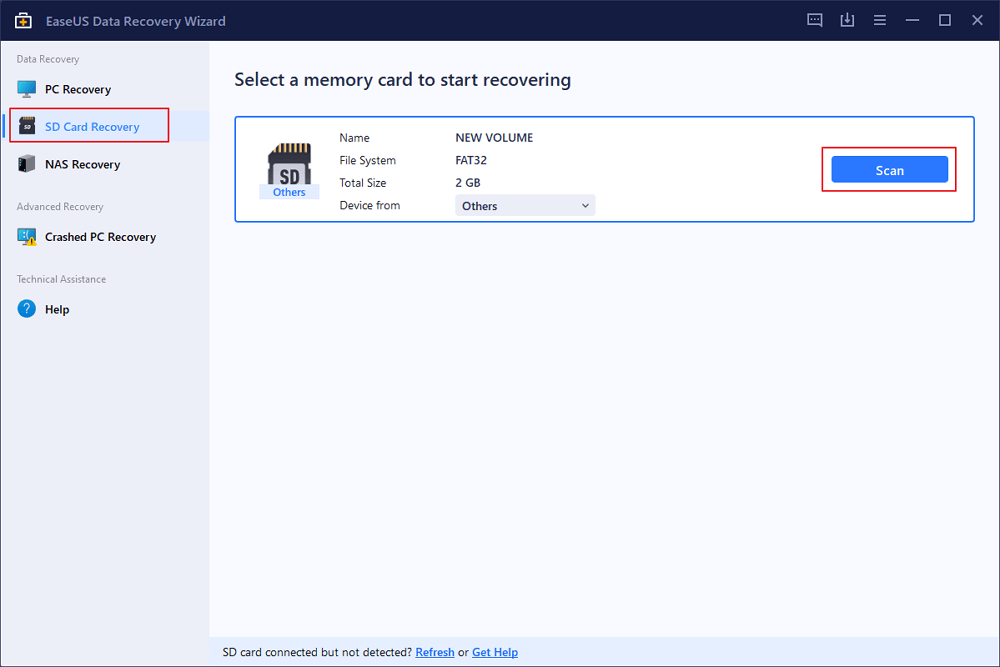 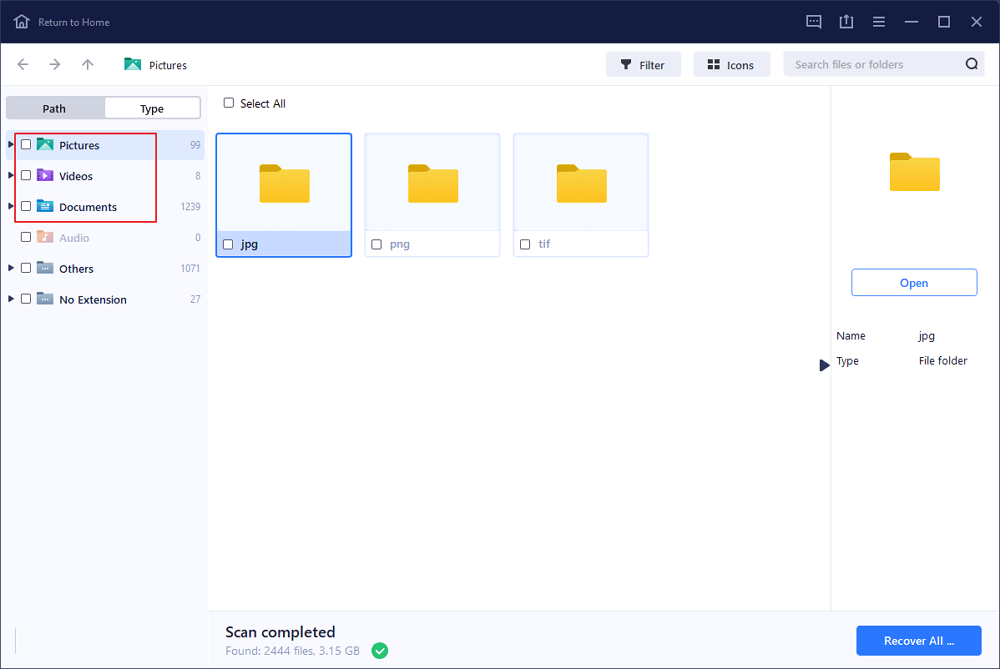 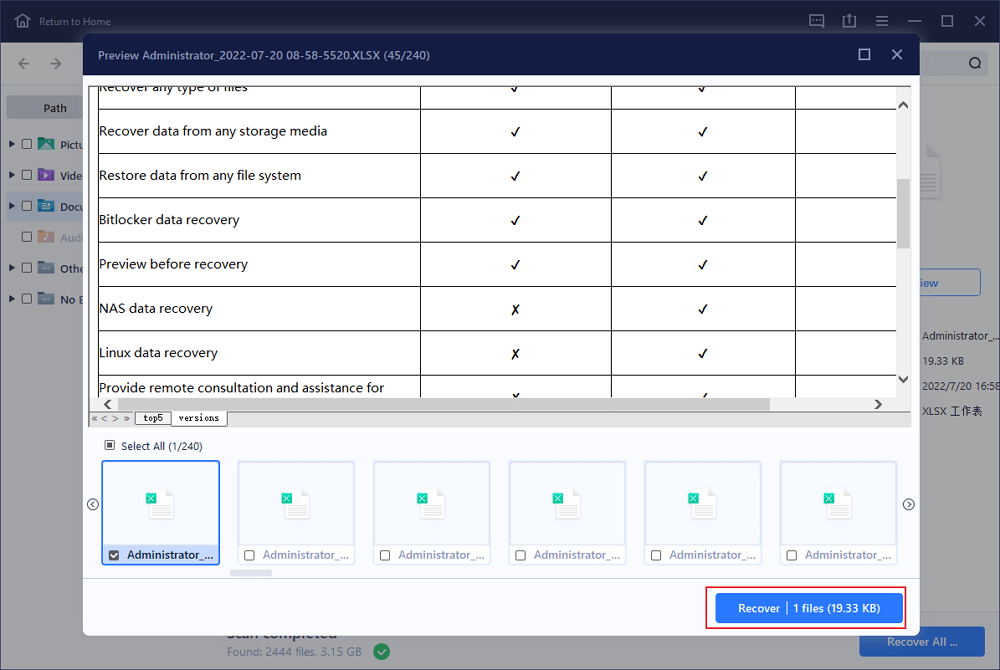