What Is A Boot Device [Everything You Need to Know]

As a computer turns on, booting, the startup process starts the operating system. The computer's first set of actions after you turn it on is called the boot sequence. Every computer has a boot process. Although the average computer does not understand the boot sequence, understanding it is crucial for customizing and fixing your computer. 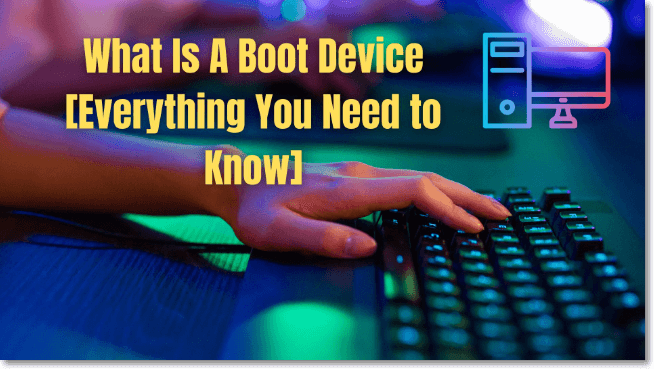 What Is A Boot Device

A boot device is a piece of permanent storage device that contains the operating system as well as all the information and files needed to start the computer. Since the hard disk is the primary boot device for most computers, most users keep their operating systems there. Solid-state drives, which can also act as a boot drive, are used as permanent storage in modern computers. Advanced computer users may boot their PCs using a network, device, or remote connection. These gadgets let you run your OS, but the hard disk or SSD is the finest.

Despite being slow, external boot devices might be helpful to troubleshoot the OS already loaded on the hard drive in an emergency.

What Can Be Used as A Boot Device

Bootable devices include a hard drive, floppy disk drive, CD-ROM drive, DVD drive, and USB flash drive. However, the computer cannot boot from a drive, diskette, or disc unless the required boot files are on them.

The hard disk is the most frequently utilized boot device or boot drive. The boot data and drivers needed to run Windows on the computer are copied when an operating system is installed on the hard drive. For example, you can click here to view how to copy installed Windows 11 to USB.

A bootable disc is put into the drive when installing a new operating system, troubleshooting the computer, or booting from another disk (like a CD-ROM drive).

1. How to choose a boot device?

Press Windows + R key on the keyboard to open the run command. Type msconfig and press Enter. Click the Boot tab in the window to see if the OS-installed drives are visible. Click "Set as default" next to the operating system you want to boot from. Click Apply and OK. Next, restart the computer and check if the issue resolves.

2. Why does my computer show no bootable devices?

When the hard drive that needs to start Windows cannot be found or recognized, your computer will report "no bootable device."

The hardware requires access to the OS and boot files to boot to Windows successfully; if not, the computer will not start up.

3. What causes the boot device not to be found?

4. How do I fix my boot device not being found?

Check your computer's settings to ensure the BIOS searches for the right boot drive. Configure the BIOS to load the appropriate disk when a computer has more than one disk installed. Lastly, ensure a bootable device is connected to the PC. Otherwise, a boot device not found error would occur.

So, to summarize, the specialized boot device hardware pieces can read or hold the startup software for a computer. The machine cannot start without this component. The bootable device notifies the computer's BIOS that it is the boot device when you switch on the computer. I hope you learned what a boot device is and what can be used as a boot device for your computer. Always remember that a hard disk is the most frequently used boot device.