What Is Fault Tolerance? Definition, Requirements & Examples [Everything You Need to Know]

Productivity and work environments require the endless provision of technology. This means continuous backup and server support to ensure productivity doesn't halt at any point in time. So, whether it's a power failure or hardware issue, Fault Tolerance leads the way. 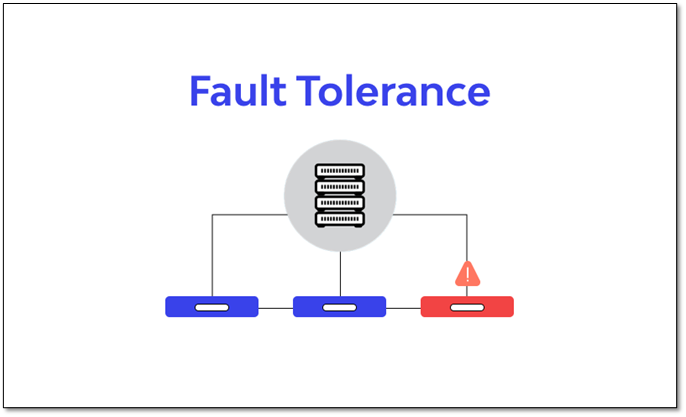 But what exactly is fault tolerance? How does it work, and what are some of its examples? In this article, you're going to find the basic definition of Fault Tolerance. Then, we're going to explore a few key requirements and examples of them in any workplace today. So, let's get started.

What Is Fault Tolerance?

Fault tolerance is the process of designing a system to be able to continue operating despite errors or failures. It ensures that the system can continue to operate without interruption. The term "fault tolerance" applies equally to hardware as well as software.

In some cases, fault tolerance is the ability of a computer program to detect and correct errors, which may cause it to terminate abnormally. For instance, if a computer has a failing device, it'll sound the error alarm—allowing the corresponding user or technician to deal with it.

However, the basics of fault tolerance include the following:

These are some of the key definitions of fault tolerance. If you were to put it simply, fault tolerance is a fail-safe option for failing hardware or software. So, that the work or business continues seamlessly.

The requirements of fault tolerance are quite easy to understand. However, they can depend on the business scale and amount of data or hardware that they use. Let's take one computer in an organization as an example.

If it has around 100GB of data, then it'll require 150-200GB of storage. However, if that storage fails, it needs to have another hard drive with the same data and storage capacity ready to take its place. So, to sum it up, here are three of the key requirements of Fault Tolerance systems:

Hardware systems are usually replaceable or on-the-go hardware devices that take another's place. As mentioned before, if a hard drive suffers failure, another hard drive will take its place in a computer or NAS device.

Another example of hardware Fault Tolerance systems is backup servers. So, if one server goes down or shuts down, another server with the same configuration takes its place. Hence, it doesn't hinder productivity.

Whereas software Fault Tolerance systems are created with the help of alternative programs. One example of this would be server-based databases, where data is constantly updated. So, in case of a failure, the update or the most recent data can take its place.

Lastly, power source Fault Tolerant systems include measures for uninterrupted power supply. Therefore, in case of power loss, the devices will still be backed up by batteries, backup generators, etc.

As mentioned throughout this article, Fault Tolerance relies on hardware or software with identical properties. So, when one fails, the other takes its place without interruption in the workflow. So, the three examples include:

These are the key examples of fault tolerance systems in today's world. They can change and update depending on the requirement of an organization. However, what doesn't change is the basis of alternatives replacing the primary.

These are some of the key aspects of Fault Tolerance. While it varies from enterprise to enterprise, it's highly beneficial to businesses on all scales. Mainly because it ensures that the productivity or workflow doesn't have to stop or get interrupted.