What Is DAS? How Does It Work?

DAS, the abbreviation of Direct Attached Storage, is a kind of storage system that can be connected to computers, servers, or workstations without a network.

It is called direct attached storage because it doesn't connect to the network through Ethernet or Fibre Channel, nor use network devices such as hubs, switches, or routers to make storage available. 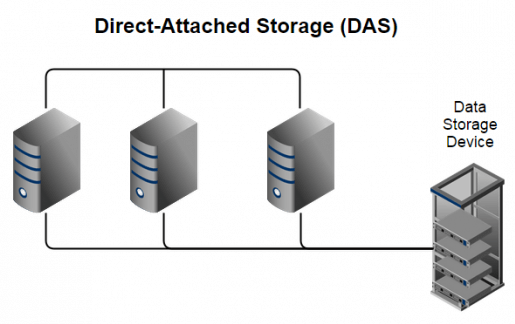 According to the device storage location, DAS can be divided into internal and external DAS, two types.

Internal DAS can be a storage device attached internally to a computer or server with a serial or parallel bus. One of the typical examples of internal DAS is an internal HDD in a computer. Actually, each computer is equipped with at least an internal DAS, like a traditional HDD, or a faster SSD connected with a SATA interface.

External DAS is placed outside the computer device, connecting to a server or workstation with USB, eSATA, SAS, or SCSI. Its typical examples are external hard drives or hard enclosures that allow connecting multiple devices.

According to different connecting devices, DAS has various forms, including SSD, hard drives, and optical devices like CDs, DVDs, and tape storage.

DAS has been widely used for its safe data protection because users don't need to access data without a network, significantly reducing the possibility of data leakage. Compared with NAS, DAS also takes advantage of lower cost and simplicity.

However, this does not mean that DAS is without drawbacks. Here we comprehensively list the advantages and disadvantages of DAS to help you better choose a data storage system.

So far, you must have known what DAS is, its working principles, and its pros and cons through the article. DAS plays an important role in expanding network connections. But it is not the only choice. NAS and SAN are also available for data connection which works with different data transfer modes. If you don't know which one suits you, refer to the differences between DAS vs. NAS, or NAS vs. SAN, it is a great way to help you make the right decision.