CMR vs. SMR Hard Drive: Which One is Better to be Choosen？

As the main component for data preservation, hard drives are indispensable. However, people are usually confused about choosing a suitable hard drive. For example, CMR vs. SMR hard drive, what are their differences? And which one is better? In the following passage, I'll introduce them in detail.

PMR vs. CMR vs. SMR: they are three methods to record the data of HDD. PMR appeared first, and as the demand for storing data became more diverse, SMR was created. So PMR includes both SMR and CMR. Here are their definitions: 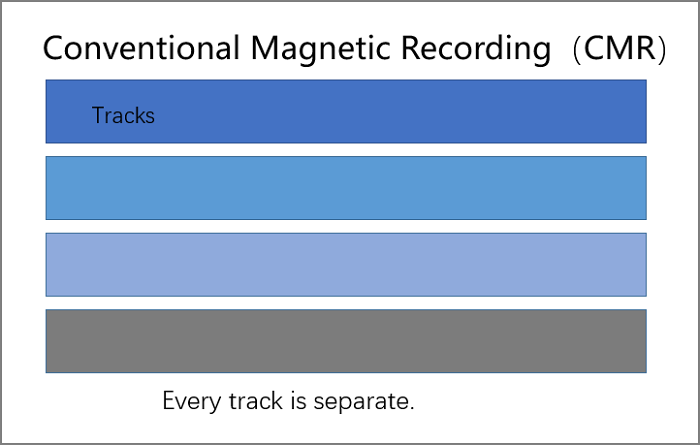 CMR refers to Conventional Magnetic Recording. And when hard drives work, they will store data in "tracks." The different ordering of tracks will determine the space of hard drives. In CMR hard drives, the tracks are parallel. And there will be a small gap between every track. 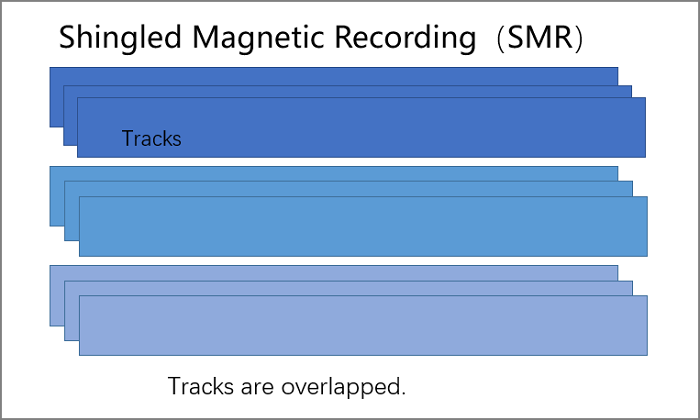 SMR refers to Shingled Magnetic Recording. As the name describes, the SMR also works like shingles. It is a new technique for recording data. Of course, we already know more space will be if more tracks are on hard drives. Unlike CMR, which will leave a small gap, in SMR hard drives, part of the data will overlap the stored data in the tracks. Thus, more space will increase the density of the disk.

Part 2：CMR vs. SMR Hard Drive: What are their Differences

After knowing the definition of CMR and SMR, we have a basic knowledge of them. Now it's time to know more details:

Every track in CMR is parallel, while in SMR, some tracks will be covered. And the write head of the hard drive is wider than the read head. So, it will be more complicated to operate with SMR. If you want to write data on SMR hard drive, you need to backup the overwritten part of the data and then erase it, and next, you can store the data. But in CMR hard drive, every track is independent. Data can be read or written directly.

The space is more crowded because of the increased disk destiny in SMR. As a result, it will be slow to write data. Under normal conditions, CMR costs 15ms while SMR costs 20ms. But the tracks are closer to each other, and the heads move a shorter distance, then the reading speed may be a little faster than CMR. With CMR hard drive, it is easier to write data because there are gaps between tracks. And the writing speed will be much faster.

SMR hard drive changed the distribution of tracks. This way also adds burden to disks while increasing their capacity. Because in SMR, frequently erased and written will accelerate the aging of the head. However, when using CMR hard drive, every track is independent. And it doesn't affect other data when erased, and the data can be easily written. So CMR hard drive can be used longer than an SMR hard drive.

Part 3：CMR vs. SMR Hard Drive: Which One to Choose

We already compared the main differences between CMR vs. SMR in the last part. So, what are their pros and cons in the same capacity? Let's explore it and make the best choice.

Comparing the SMR and SMR, both have their advantages. SMR hard drive has more capacity at a lower price. It's more suitable for static data to be archived. While the speed, flexibility, and security are higher on SMR hard drives, it is a better choice for daily work. So It’s a smart choice to buy CMR hard drives more. And here is also a CM HDD list you can use as a reference.

Part 4: CMR VS SMR Gaming: Which is More Suitable?

CMR hard drives are more suitable for gaming. Because games are usually updated frequently, they need faster operations to deal with the data. If you use SMR hard drive as the game disk, the drive may not be able to withstand the updates. As a result, the game's speed will be affected, and if it's serious, it may cause the game to get stuck or bring some system bugs. And you need disk backup to decline the loss of unexpected system crashes.

Part 5: CMR VS SMR for NAS: Which is Better?

As a server dedicated to storing data, NAS is mainly for sharing and learning in homes and businesses. If you decide CMR hard drive, it would be expensive. If you choose SMR hard drive, the capacity is enough, and the price is acceptable. But the same material cost can make a disk with greater capacity; of course, there is a big lack of performance.

But home data or work data are usually operational data. They are essential and need to be written frequently. CMR hard drive will add data quickly and safely. So it's better to choose CMR for NAS.