If you own a Linux system and are currently facing low disk space, formatting your disk is one of the best options you could enable. Linux is one of the most popular open-source operating systems that sometimes becomes complicated. The main thing that interrupts users is that there is no immediate solution for formatting the disks. 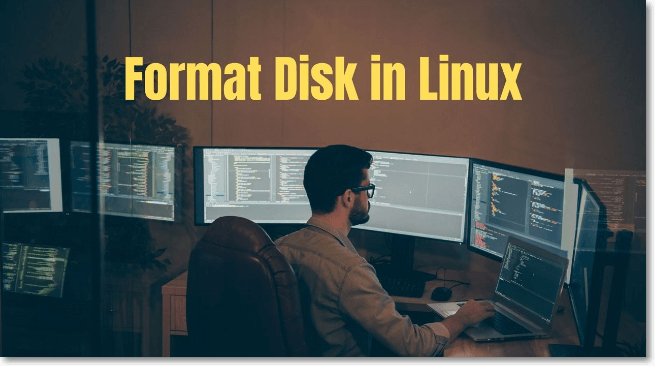 We perfectly understand your worries, and we have landed here with the perfect guide to help you resolve your queries.

To format the Disk ext4 File System efficiently, all you have to do is:

Step 2. Once done with it, you must verify the file system change. It would help if you use lsblk -f to do it quickly.

Step 3. Once complete, the terminal will list blocked devices. Locate the preferred partition that you are willing to format.

Step 4. Confirm the formatting of the preferred partition. Bingo! You have successfully formatted your Disk ext4 file system conveniently.

Step 1. One can easily format a disk with a FAT32 file system using the command—sudo mkfs -t vfat /dev/sdb1

Step 2. Once done, run the command lsblk on your device and verify the file system to change.

Step 3. You must locate the preferred partition from the list provided. The command you have to use here is lsblk -f.

Step 1. To format the NTFS disk, the first thing you have to do in the league is to run the mkfs command on our Linux device.

Step 2. Specify the NTFS file system for formatting the disk successfully. The command you have to use here is—sudo mkfs -t NTFS /dev/sdb1

Step 3. Once done, a confirmation message will be provided to you by the terminal. Verify the file system change using the command lsblk -f

Step 4. Locate your preferred partition and confirm that it only uses the NTFS file system.

We are leading for you if you are eager to know the different Linux commands in detail.

It is one of the most popular basic Linux commands that help you perform different tasks that need administrative or root permissions. The command usually runs for about 15 minutes.

The command is generally used for finding the path of your current working directory. One doesn't need to make much effort to run this command on your device. Just enter this command, and you will be perfectly done with it.

This command is usually used for navigating through Linux files and directories. The path or the directory name usually depends upon the current working directory.

The "is" command usually lists files and directories within a system. Make sure to run this command with a flag or a parameter, or it will only show the content on the current working directory.

The "cat" command is also known as the Concatenate command. It is one of the most frequent commands that list, combine and write file content to the standard output.

This command is usually used for copying files or directories and their content.

This command is mainly used for moving and renaming files and directories and doesn't produce any output upon execution.

This command is mainly used for creating one or multiple directories at once. Moreover, we can also set permissions for every guide using this command.

This command is usually used for deleting or emptying the directory. It is always advised to run this command along with sudo privileges in the parent directory for successful access.

This command is also used for deleting particular files within a directory. One has to use permissions while using this command for successful execution.

We hope you guys have understood how to format disks in Linux. Linux is one of the leading open-source Unix operating systems on Linux Kernel. Formatting a drive on Linux is not a complicated process.

You must focus on a few things and be perfectly done with them. We have provided you with a detailed method for effectively formatting the ext4 file system, fat32 file system, and NTFS. We also have added here some of the most common commands for Linux.

Make the built-in tools included in your Linux operating system and manipulate the drive partitions per your preferences.

1. What is disk formatting in Linux?

It is the process that prepares the Linux operating system for initial use. Formatting is used for releasing the storage space on a device. Usually, one or more file systems are created during the Linux formatting.

2. How do I format a Linux Server?

If you are willing to remove the Linux, we advise you to back up your information.

Wiping out a drive on Linux is not a complicated process at all. We have provided you with three simple and accessible methods to enable the above. You can easily pick up the one depending upon your preferences.