How to Fix PS4 Safe Mode Loop Without Losing Data

Can't get PS4 out of Safe Mode, it's looping there.

"Hi, PS4 stuck on a Safe Mode loop, with several options available to proceed, such as restart, update system software, rebuild database or initialize PS4... Unfortunately, I have no idea which one I should choose to go. Would you kindly explain those functions? I need to fix PS4 Safe Mode loop without losing data."

According to the official explanation, Safe Mode built in the console is widely used when players are having trouble starting the PS4 system. With the 7 most basic functions, including restart the PS4, change resolution, update system software, restore default settings, rebuild the database, initialize PS4 and initialize PS4 (reinstall system software), booting in Safe Mode can help correct issues and make PS4 start normally. For example, you can fix corrupted data error on PS4 by rebuilding the database. 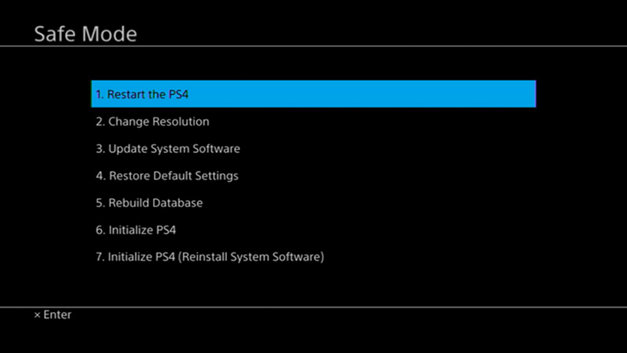 Here's the story. When PS4 suddenly powered off and can never be powered up again in normal mode, then you come up with the idea - why not boot into Safe Mode? So, you just start off by following the formal procedures.

However, in the coming hours or so, no matter how long you expect to access PS4 system storage from the Safe Mode, it just stuck on the screen with an endless loop.

How to Fix PS4 Safe Mode Loop Without Losing Data

Update System Software - You can download and install any new updates that are available, by which you may get rid of the Safe Mode loop if the problem resulted from outdated system software.

Restore Default Settings - It restores the PS4 to the default factory settings. After factory reset, you need to set again the time zone and a few other console settings.

Initialize PS4 - All data and settings will be lost by performing this step. It deletes all user data and restores the PS4 as if it just came out of the box. So, make sure that you backed up the PS4 data before taking the step.

Initialize PS4 (Reinstall System Software) - It works the same with "Initialize PS4" by which all user data will be permanently erased, afterward a reinstallation version of PS4 system software will be installed.

In addition, according to some experienced users who had been suffering from Safe Mode loop, they surprisingly found out that insufficient funds in an associated card in the PS4 account would cause a Safe Mode loop within a loop! Let's see how they've finally worked the problem out.

"Here's a new one for you guys. I was stuck in the Safe Mode loop on PS4 and tried all suggestions but I couldn't update settings, initialize, etc. because when I chose any option I would then get error code E-8200002E. The error code forced me to turn off PS4. It was a loop within a loop! Looked up the error code. Insufficient funds. Didn't have money on my card so l deleted my card from my account through the website and restarted PS4, assuming it would go into Safe Mode for the 15th or so time in a row. Nope. Booted up normally. So, having a card on file with insufficient funds caused the Safe Mode loop. PlayStation, this is completely unacceptable."

Bonus Tip: Back Up PS4 Game Screenshots and Videos

If you have taken many game screenshots and shot videos while playing games on your PS4, it's a wise choice that you back up and save those files to your external hard drive or computer.

This will help you to save up space on your PS4 hard drive. To do so, you need to take your PS4 hard drive out and connect it to your PC. Then, you can manually copy or apply reliable backup software to back up all screenshots and videos of your favored games to your computer or an external hard drive.

If you prefer backup software, EaseUS Todo Backup is capable of helping you out.