7 Days to Die is an exciting open-world survival horror video game that is available for multiple platforms, like PlayStation 4, Xbox One, Windows, etc. The purpose of this game is to survive in a random world by fighting against all odds, such as zombies, injuries, illness, etc. It's prevalent among all the players, but some players are currently facing issues with this game. According to the users, when they try to load a saved game in 7 Days to Die, they get different errors at the top left edge of the screen, and the game doesn't load.

All users are stressed out because the game isn't allowing them to access their game progress, on which they spend hundreds of hours. If you're also on the facing end of this issue, we know how difficult it's to be calm in this kind of situation. To help you out, in this article, we've listed some possible solutions that can help you fix the 7 Days to Die corrupted save file issue on your PC.

Why 7 Days to Die Saves Corrupted on PC

There could be several reasons behind the corruption of a saved game file in 7 Days to Die. But, during the research, we found that most users started facing the issue when their game abruptly closed due to sudden or improper system shutdown. Besides this, there could be more reasons for this inconvenience with the 7 Days to Die game, such as an unstable internet connection, sudden electricity power cut, etc.

When the system suddenly closes in between the game, the two critical game files: main.ttw and main.ttw.bakk gets corrupted. The error that appears while trying to load the saved game also mentions the same thing. You can check the same in your error. In short, this issue appears when the computer or game abruptly crashes, due to which these two files get corrupted and don't open. Some users also shared the error, and it also states the same.

This could be the same in your case. You may have also directly shut down your computer instead of closing the game from the menu and then shutting down the PC, which is why this issue appeared. But don't worry, this issue can be fixed in simple steps. You can check some possible working solutions in the next section and implement them.

How to Fix 7 Days to Die Corrupted Saves on PC

You've now looked at some possible reasons that can lead you to this irritating issue. Now, it's time to fix this issue. This section mentions the best workarounds to make the 7 Days to Die corrupted saved files work again. You can try the listed solution and eliminate this issue easily.

Before troubleshooting this issue, we suggest backing up the current 7 Days to Die game files to prevent any data loss. This is because we'll edit some critical game files necessary to run the game. So, if anything goes wrong, you'll have the backup to use.

You can use a third-party backup tool to back up all the current game files. We always recommend users use the EaseUS Todo Backup, as it's pretty easy to use and come with all essential features. You can use the EaseUS Todo Backup tool to take a backup of all your 7 Days to Die save game files and save them for the safer side. It lets you generate large backups in a few minutes and save them in your cloud storage. Also, all your data remains safe from ransomware and other viruses.

Here are some of the key features of the EaseUS Todo Backup that can help you along backing up the game files:

You can download the EaseUS Todo Backup tool on your Windows PC by heading to the attached link. Once all the game files have been backed up, try the workarounds mentioned below on 7 Days to Die.

1. Quit the Game & Restart the Device

As mentioned above, most users faced this issue because of the sudden or improper system shutdown. We want to start with the most basic solution. So first, quit the game and restart your computer. Here are the steps to do the same:

1. Launch the 7 Days to Die game on your PC and open the game menu by pressing the Esc key on your keyboard.

3. After quitting the video game, shut down the PC to end all the processes of the 7 Days to Die game.

4. Once the computer is properly closed, restart it again, launch 7 Days to Die, and try to load the same corrupted game file again to check the issue's status.

We hope the issue is resolved now with the computer. Before moving to the next solution, we want to remind you that you should never force close it by directly shutting down the console. Please keep this in mind.

2. Create A New Game With the Same Settings

If restarting the system doesn't fix the issue, then we suggest replacing the corrupted main.ttw and main.ttw.bakk files with the working files. As we mentioned above, this issue appears when the main.ttw file doesn't load properly or gets corrupted. To fix the issue, you can create a fresh game and replace the new world data with the corrupted world data. We've explained the same in the below-mentioned steps:

Note: This troubleshooting method may fix the issue, but it'll send you back to the game's first day. But the best part is that you'll have all your stuff and builds with you even on day 1. So, you don't need to worry about the game resources you have collected after several hours of grinding.

Step 1. First, launch 7 Days to Die on your computer and click on the New game option on the entry screen. 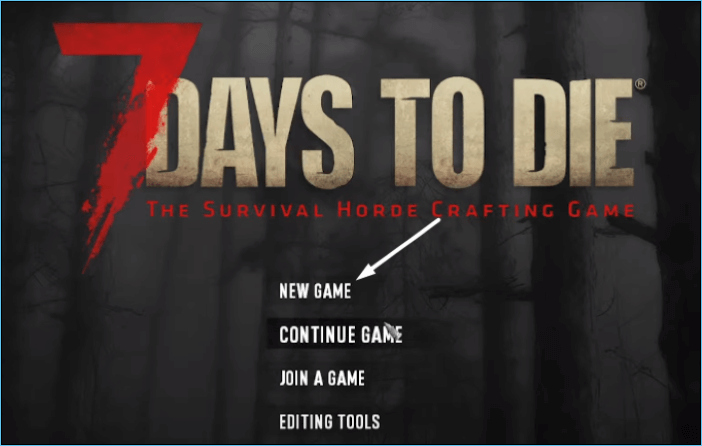 Step 2. Now, create a new name with the same settings as the corrupted game. For instance, the game name, game world, world size, and all other settings should be the same as the previously corrupted game file. 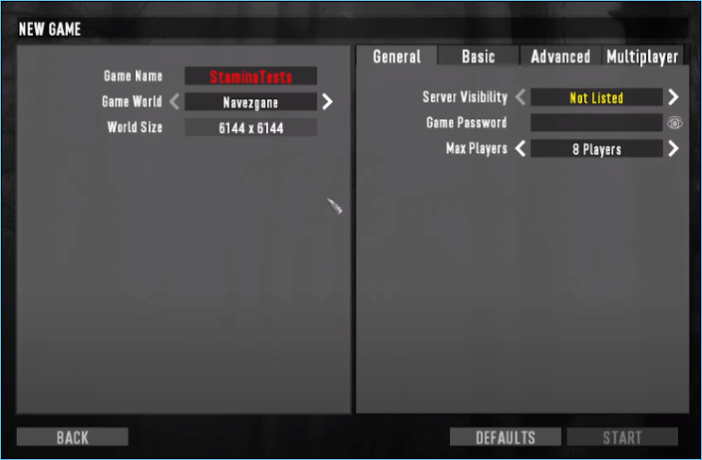 Step 3. Once you've created the new world with the same settings, quit the game and open File Explorer on your Windows PC.

Step 4. Now, navigate to the 7 Days to Die's Saves subfolder by copy-pasting the below-mentioned directory path in the top search box.

Step 5. Next, click on View in the ribbon menu of File Explorer, then hover the arrow on Show and check the Hidden items option. 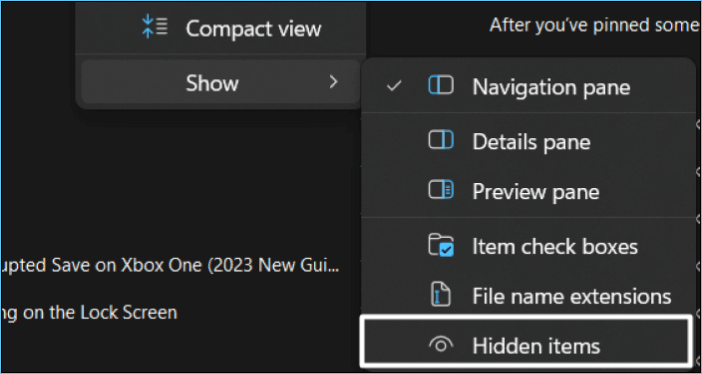 Step 6. You'll now see all the saved game files by their seed world name in the Saves subfolder. You need to double-click on the seed name to see all the game data.

Step 7. Once the map folder is opened, double-click on the saved game that isn't opening properly.

Step 8. Then, delete the below-mentioned files from the corrupted saved game folder and head to the newly created game folder in the Saves subfolder.

Step 9. Lastly, copy the main.ttw and main.ttw.bakk files from the newly created game folder and paste them into the corrupted saved game folder.

That's it! Now, restart the computer and launch the game. Once the game is launched, try to load the saved game file that wasn't opening earlier and showing errors. The game must open properly now without such issues.

7 Days to Die is such an exciting game that we can't stop ourselves from playing it several hours a day. Playing it for several hours means making a lot of progress. Of course, we can't afford to lose progress at any cost. But some players' progress is already on the brink of loss as they cannot load the saved game in 7 Days to Die.

They're getting different errors when trying to open the saved game. Fortunately, this issue is fixable. Here in this article, we shared some working solutions that can help you fix the 7 Days to Die corrupted save issue on your PC. We hope these solutions help you fix the issue.

FAQ on 7 Days to Die Corrupted Saves on PC

There are very few chances that you’ll still have some doubts regarding today's topic. This is because we've already explained everything in a detailed manner. But if you still have some doubts, you can look at the most frequently asked questions about 7 Days to Die Corrupted Save PC. We hope the mentioned FAQs will clear all your doubts.

2. Why Does My Save Keep Getting Corrupted?

During the research, we found there could be several reasons behind this game’s saved file corruption. But one of the most prevalent causes is improper computer shutdown. You may have shut down your computer forcefully by directly pressing the Power button, which is why this issue appeared. Some other reasons are viruses and other malware and sudden power cuts.

3. What Happens if You Delete Saved Data for a Game?

You'll lose all your game progress if you delete the game's saved data from the system's storage. For instance, you'll lose all the in-game achievements, progress, and everything that is present in the game. You won't be able to recover the lost data unless the data is stored on the cloud servers.

4. Does 7 Days To Die Have Backup Saves?

Like other Steam games, 7 Days to Die also has a real-time cloud sync feature that automatically saves your game while playing. You can also easily back up and restore 7 Days to Die saved files from the Steam app. Also, you can find the saved game files in the Saves subfolder of the main game folder. You can move to the mentioned path to access the Saves folder.