How to Safely Upgrade Android Marshmallow 6.0 to Nougat 7.0

Get your Android phones and tablets ready to safely upgrade Android OS from Marshmallow 6.0 to Nougat 7.0 without losing data. Tons of amazingly new features in Nougat are waiting for you to explore!

Android operating system has now been updating from 6.0 to 7.0, with a sweet new name called Nougat. Nexus users will be the first to taste Android Nougat 7.0 on their phones, later are going to be Samsung, HTC, Motorola, LG, Sony and Huawei...Speaking of the methods to upgrade Android Marshmallow 6.0 to Nougat 7.0, we'd like to discuss something.

Primarily, no matter which way users are going to adopt, backup Android to PC is highly recommended. As we've heard many people encountered data loss after Marshmallow update, so did it happen by Android 6.0 to 7.0 update. You should know how important it is to backup contacts, photos, SMS, memos, app data and other types of files. Therefore, feel no hesitate to download EaseUS MobiSaver for Android and safeguard data on your device right now. 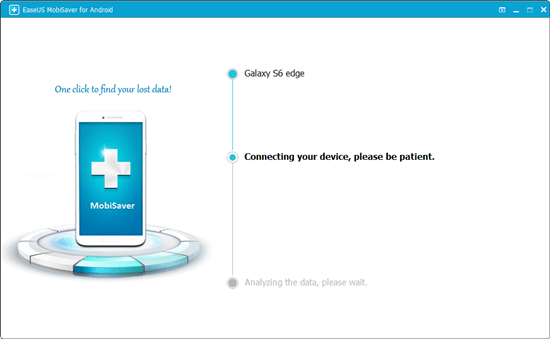 Next, the two popular ways for Android Marshmallow to Nougat are via OTA update and a factory image. What's the difference? Generally, we won't suggest people upgrade their devices using factory image, as it's for advanced users who want to taste the flavor of Nougat before anyone could. What's more, the process of using factory images to upgrade from Marshmallow to Nougat is quite risky, which might damage your mobile. If you're experienced users who are confident enough (with backup created), go and download Android Nougat 7.0 system image by clicking the download link in the below.

How to Upgrade from Android Marshmallow 6.0 to Nougat 7.0 via OTA Update

Being different from factory image update, using OTA (Over The Air) update is much easier with little risk. Again, do remember to backup all your contacts and data to a PC with EaseUS Android data recovery tool, because the process will install Android Nougat 7.0 on your device and will wipe out the old Marshmallow. The step-by-step guide for Android 6.0 to 7.0 update is as follows.

Important: Make sure you are connected to wifi connection, and there are at least 50% of battery life before proceeding.

Step 1. Go to Settings panel and scroll down to see About Phone option where you will find all the details of your device.

Step 2. Tap on About Phone option. In that tap on System Updates option to check for the latest Android version.

Step 3. If your Device is still running on Android Lollipop , you may need to update Lollipop to Marshmallow 6.0 and then you are allowed to update from Marshmallow to Nougat 7.0 if the update is available for your device.

Step 4. If Nougat 7.0 OTA update is available for your device, you can download Nougat update and proceed to upgrade from Marshmallow to Nougat 7.0 seamlessly.