Recently, with more and more Android devices are upgrading OS to Android 6.0 Marshmallow, problems are following behind. One of the most complaints from users of the big brands including Nexus, Android One, Samsung, Motorola, Sony, LG, etc. falls on the error "Unfortunately app has stopped". See what happened exactly.

Jack, Samsung Galaxy S6 - "Ever since I updated to Marshmallow, I keep getting this message (unfortunately Android system webview has stopped). Does anyone else experience the same? Any fix for this? I can't believe it's a coincidence that it just started on its own. It must be connected to the OS update."

Daan, Nexus 6 - "The message always pops up even after pressing OK. I can't go to settings because it won't open with the message Unfortunately app name has stopped won't disappear."

Gordan, HUAWEI P8 - "Almost all the apps on my phone have all of a sudden stopped working... i.e. Google map, YouTube and other apps does not work while receiving the error message."

Common Ways to Fix The Error "Unfortunately app has stopped"

"Unfortunately, the app has stopped" error is very common in Android devices, and many factors will cause the error, such as apps out dated, the app that keeps crashing is Android System Webview app. Altogether, we introduce five methods to fix the annoying problem, hope that at least one of the methods works for your case.

We suggest you take the method for the first attempt if you got the error for only this app instead of massive ones. First, uninstall the app that is causing the problem and then re-install it back, see if you get rid of "Unfortunately, the app has stopped" prompt.

Sometimes newly installed apps don't support the software or hardware of the device and thus they should be removed from the device to get rid of the errors caused by app itself.

Cache files are main source of errors and problems in functioning of Apps, by clearing cache may solve most of the problems associated with Apps. To clear cache, go to Settings > Application > Manage apps > Select "All" tabs, select the app which was producing error and then tap Clear cache and data.

Clearing RAM is a good deal when you are facing the error "Unfortunately, the app has stopped" in Android. As Apps running in background use plenty of RAM and thus there is less RAM available for the app usage hence producing the error. Go to Task Manager> RAM> Clear Memory.

If none of the methods above worked, you have to factory reset your device. Some of you may feel reluctant to do a factory reset, because the behaviour will erase all the data related to apps, all software updates, even your pictures, documents, messages, contacts and any personal files saved to the Android memory storage.

Anyway, before factory reset your phone and try to fix apps crashed, stopped problem, do remember to backup data beforehand. Go to Settings and find backup and restore menu, where you can back up current settings and application data. But if you ask for a complete backup solution for other files on your Android, learn how to backup Android to PC in minutes. After taking good care of the files, you can now perform factory reset at the very bottom of this backup and restore menu. 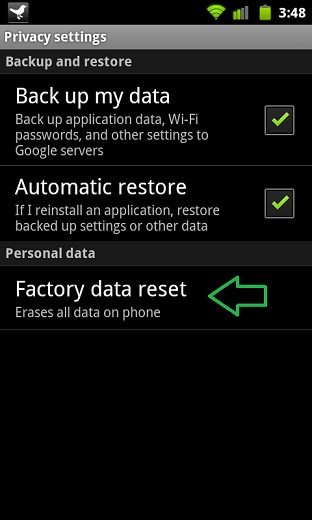 >>You may want some extra help to recover Android data after factory reset with EaseUS MobiSaver for Android.

I hope you've successfully solved the apps error on your Android devices. To be honest, not only Android faces "Unfortunately app has stopped" error, Windows phone, iOS devices also had the problem, but the fixes are pretty much the same.