This page tells you how to recover data after Marshmallow update. You can try it to recover contacts, videos, photos, notes, text messages, documents, etc lost after Android 6.0 update.

Can I recover data from Samsung after Android 6.0 update?

Is there any method to recover lost data from Android phone after Marshmallow update? Last night, I have update my Samsung Galaxy s6 to Android 6.0, and after that, I found that some photos, videos have got lost on the phone. Is it possible to get back those file back?

Google began rolling out the Android Marshmallow update to certain Nexus, Samsung, Sony, LG, Motorola phones. But Android data recovery is likely to be a trouble, as data loss may occur due to system formatting, forgetting to back up, even phone system crash during Marshmallow update. It will make you lost your data including contacts, text messages, pictures, videos, documents and more after android 6.0 upgrade. When facing such a situation, you might be frustrated about how to recover files after updating to Android 6.0. Please don't worry! Here we will introduce you powerful Android data recovery software and shows you step by step, how to use it to restore data lost after Marshmallow update.

EaseUS Android data recovery software is a reliable tool that you can use to recover data after upgrading to Android 6.0. It allows you to recover lost files such as contacts, videos, photos, text messages, documents from all popular Android devices from Samsung, LG, HTC, Huawei, Sony, ZTE, etc. Now you can read the detailed guide to learn how to perform the data recovery job.

NOTE: As the software can only access the rooted Android device, you need to make sure that your phone has been rooted before data recovery.

Step 2. Scan your Android phone to find the lost files

After connecting your Android phone, the software will quickly scan the device to find all the existing and lost data. You can easily find the lost files you want by choosing the correct file types. 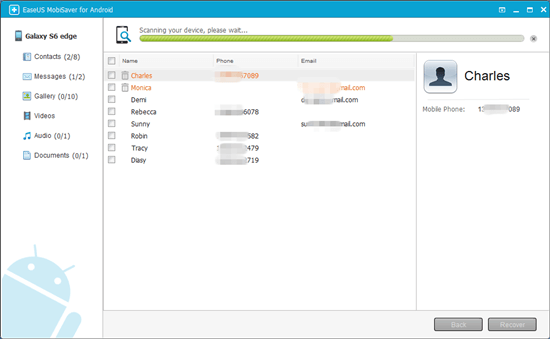 Preview all the recoverable files one by one and then you can select out those you want quickly. "Only display deleted items"option to list the deleted files only. Finally, you can click "Recover" button to get the selected files back once. 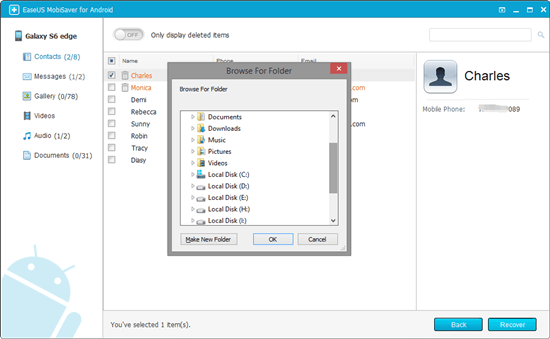