Motherboard: An Indispensable Part of Your PC

If you are looking to buy a new motherboard, there are many questions you should be asking yourself. This article will help untangle the complexities and ensure you get the best motherboard model that suits your needs. We will also introduce you to the top five gaming motherboards in 2022. 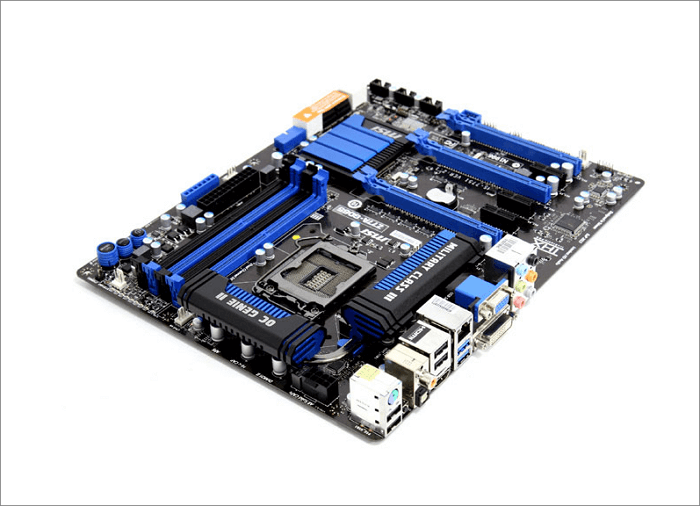 The motherboard is defined as a printed circuit board (PCB) for the computer that acts as a connecting point for various components like the central processing unit (CPU), graphics processing unit (GPU), memory, and storage. It is a kind of backbone that allows a variety of components to communicate. It is also known as a logic board or mainboard.

A motherboard's form factors determine its overall layout, including size, shape, casing, power supply, and mounting holes. Here we have mentioned some of the common form factors of a motherboard.

It is used to mark in-depth motherboard configuration and dimensions to improve standardization. As an evolution of the Baby AT form factor, ATX was developed by Intel in 1995. The measurements of ATX motherboards are 11.2 × 8.2 inches. It offers advanced software-controlled facilities. It also provides less interference in access to drive bays and has excellent airflow.

Micro ATX is the next generation of ATX. Its measurements are 9.6 × 9.6 inches which are relatively more diminutive than a standard ATX. It supports up to four expansion slots that can easily integrate with ISA, PCI, PCI / ISA, and AGP. As its size is different from standard ATX, the mounting holes are different but compatible with most ATX cabinets. Form Micro ATX supports both Intel and AMD processors.

Nano-ITX is another type of motherboard form factor first designed by VIA Technologies in March 2003 and introduced after two years in 2005. Its compatible design integrates with low-power-consuming devices like PVRs, in-vehicle devices, smart TVs, etc.

The Republic of Gamers (ROG) Maximus Series is Asus's highest-end consumer motherboard offering. Its price and features make it almost indispensable. Asus Maximus Z690 Hero is the entry-level model of the Z690. It is based on Intel's "Alder Lake" processors and DDR5 memory. It also has dual PCIe x16 Gen4 slots, which are valuable for high-end GPUs, storage, and networking.

This AMD motherboard is on the second number of our list as its advanced power and design allow users to boost their performance. It is the best X570 limited edition motherboard for your system with a combined chipset and CPU heatsink. Its price point may be as big as its e-ATX form factor, but it's packed with affluent features you won't find on other models.

The RGB splash and the moving cogs over the I/O really stand out. It seems a little expensive, but Razer fans will love the Razer-themed Z690 Taichi, which integrates seamlessly with the Chroma ecosystem. Along with its uniquely elegant appeal, it has multiple aesthetic features like Dual Thunderbolt 4 ports and a solid audio solution. Its strong initial memory support is also one of the reasons it holds a spot on the top list.

Featuring Intel's brand-new 1700 LGA, MSI is back to business with the Pro B660 series motherboards to support its updated 12th Generation processors. Micro-ATX motherboard PRO B660M-A DDR4 comes with the latest Intel B660 chipset and plenty of RAM. It is a reliable choice for budget-oriented or mid-range gaming computer systems.

It is a good choice for consumers who don't want to spend too much on a flagship chipset, but still want to be able to purchase vital accessories. It is a considerable investment to get a one-stop solution for affordability, functionality, and performance.

How Does A Motherboard Work?

What Are the Common Components of A motherboard?

Tips for Handling the Motherboard

A good motherboard defines the ability of your machine as it is considered the central hub of a computer system. It is a crucial part of the computer where data is transmitted over data buses. It is an incredibly vital component of your computer that you will be able to choose.

Whenever you assemble or dissemble the motherboard, please follow the motherboard handling tips for better maintenance. We have also mentioned different specifications of motherboards, and you are free to distinguish them based on your needs, budget, performance, and speed. You can also go for other options from the top motherboard manufacturers like ASUS, Gigabyte, MSI, and ASRock.

More questions about motherboards you may be interested in:

1. Is it OK to touch the motherboard with your hands?

Yes, you can touch the motherboard with your hands but make sure to discharge static electricity. Wait a minute after you turn off the system until the electric elements are discharged completely.

2. What kills a motherboard?

3. What is the lifespan of a motherboard?

Maintaining and cleaning your motherboard can extend its lifespan by up to 20 years or even more. You'll likely have to upgrade the motherboard's hardware when the available hardware becomes obsolete. However, the motherboard itself should continue to function normally.