MacBook M1 VS M2: What Is the Difference?

The MacBook Air is Apple's most lightweight, thinnest, and most reasonably priced laptop. MacBook Air is frequently the best option for anyone seeking a powerful, dependable daily notebook. Apple's 2020 MacBook Air performance with its first-generation M1 system-on-chip was also outstanding.

In 2022, Apple unveiled a revamped MacBook Air this week, complete with the M2 chip of the new generation. The new MacBook Air with Apple's latest M2 SoC is now available. The M2-based Air appears better in every regard but will also cost more. 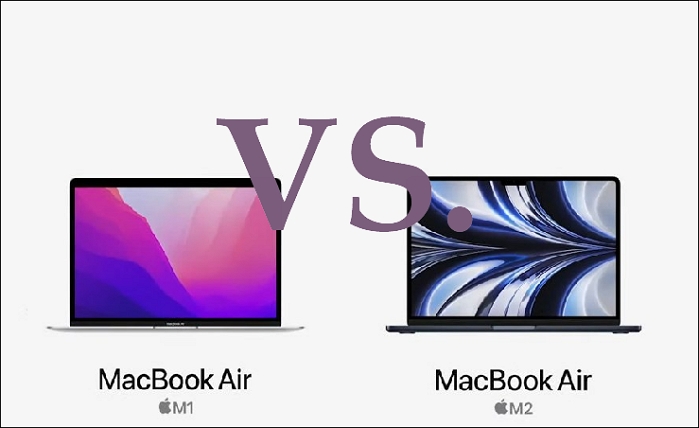 The M2 MacBook Air is undeniably attractive and distinguishes itself from the one it succeeds. The new one contains a different design with a larger screen and new color finishes, equal to the redesigned MacBook Pro. However, it still shares a similar feature with the M1 model. 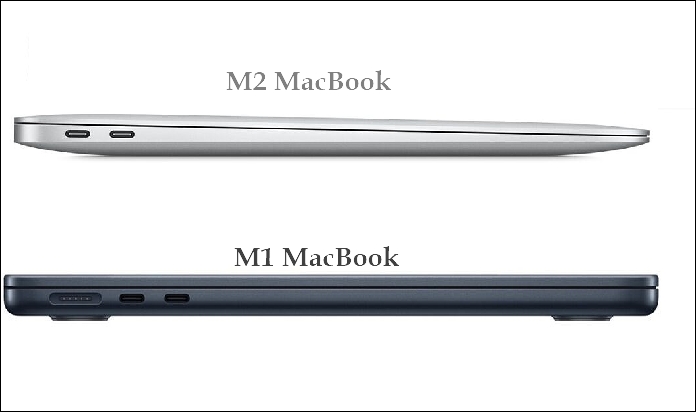 The new M2 MacBook Air's screen outperforms the M1 Air in every way. The top bezel went smaller and slightly larger overall, but the horizontal resolution stayed the same.

Like the larger 14 and 16-inch MacBook Pros preceding it, the new M2 MacBook gets a notch on its top because the camera cannot fit here due to the slimmer bezel. While M1 MacBook has a flat but thicker top bezel.

According to the chart, you can see that M2 MacBook is thinner and lighter than M1 MacBook.

Ports. The M2 brings back MagSafe to the MacBook Air, making this comparison the clearest to follow. Additionally, an upgrade to the 3.5mm headphone connector increased support for high-impedance headphones.

The MacBook M1 is still reliable in daily tasks and will be sufficient for many, such as students. Although the MacBook M2 is quicker than the MacBook M1. Here are the differences in their performance:

The MacBook M2 processor contains two extra GPU cores than the M1 chip, going from an 8-core CPU to a 10-core GPU. Additionally, the M2 chip can run with up to 24GB of unified memory. Thus, the new chip also means that the Macs use less power and can perform more tasks.

Although the MacBook M1 and M2 have the same base memory option—8GB Unified Memory—the performance is different. The amount of memory has the most effect. The M2 MacBook Air can accommodate up to 24GB of memory, compared to the M1 MacBook Air's maximum of 16GB.

The heat spreader on the MacBook M2 is substantially smaller. Although neither laptop has an effective cooling system fan, the MacBook M1 has a vastly more oversized metal heatsink.

The enhanced media engine is the cause of the M2's most significant performance improvement over the M1. If you deal with video frequently, you are likely aware of the potential performance benefits of hardware-accelerated encoding.

Instead of the MacBook M1's Retina display, the MacBook M2 applies a Liquid Retina display, which is different primarily because it offers more excellent contrast ratios, compatibility for more colors, and more pixels per inch. These changes will rarely be apparent even when the brightness has been enhanced. Conversely, professional design work will profit from the improved color representation.

The display size is another significant distinction between the new MacBook M1 and M2. The MacBook M2 has a 13.6-inch display, which is larger than the 13.3-inch display of the M1 model.

The MacBook M2 boasts a 1080p FaceTime camera in favor of the 720p one found on the MacBook M1. For video calls, the 1080p camera will be sharper.

Suppose you are currently debating purchasing a MacBook Air.

For just $200 extra than the MacBook M1, the MacBook M2 provides a new processor with additional 2 GPU cores, a larger screen, and an entirely new design, which appears to be a fantastic deal.

I would almost always respond with the MacBook Air M2 if someone asked me which MacBook was the best to purchase. It boasts a stunningly lightweight design, a strong processor, and a ton of other little tweaks that make working and playing more fun.

However, the MacBook M1 is the best option if your budget is less than $1,000. Although there are no really "affordable" MacBooks, the M1 is the ideal entry-level model.

To Wrap It up

In many ways, the MacBook M2 is a big step up from the original. It boasts increased performance, a more contemporary design, a better display, and a few minor but noticeable upgrades. The MacBook M2 costs significantly more than the M1. Still, in exchange, you will acquire an improved battery and display, a higher resolution camera, more RAM options, more color options, and support for spatial audio.

However, if you use your MacBook more frequently or for work-related activities like video or photo editing, the M2 MacBook Air is unquestionably more valuable than its forerunner. But if you don't have any issues with M1, hold off on turning it into M2.