How to Update to Android 7.0 or Android N without Losing Data?

Are you trying to update Android 6.0 Marshmallow to Android 7.0/Android N? Effective methods offered by EaseUS will help you to perform Android 7.0 (Android N) update job without losing any data now. 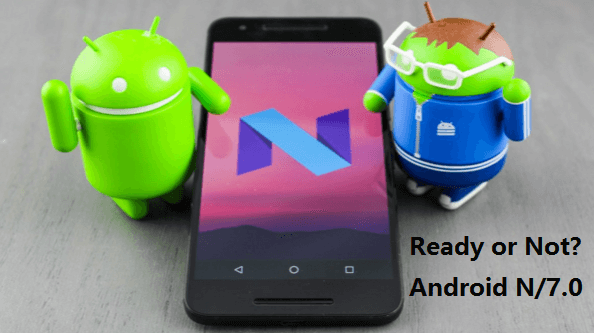 Question: what you should do before Android 7.0/Android N update?

According to Google, it seems that the new Android system named Android N (Android 7.0) is available to some particular Android phone producers such as Samsung. Are you ready to get the new system in your phone now? Enhanced Doze mode, freeform windows mode, new settings menu, new emoji, new camera and other new features makes Android 7.0 a must-have system for quite a number of Android users. So do you know how to prepare your cellphones ready for Android 7.0/Android N update? Here we'll list something that you may have to pay attention to before update to Android 7.0:

1. Connect phone with WiFi: this will be pretty important to make sure that your phone is connected with WiFi so to ensure that phone will be able to download installation files.
2. Leave phone with at least 2GB free space: Android 7.0/Android N will fail to be installed if cellphone has no enough space.
3. Be sure that the cellphone has more than 40% battery.
4. Backup important personal data before Android 7.0 update.

Though it's said that no damage will happen to your phone after Android system update, it's always a smart choice to create data backups for your cellphone before updating to Android 7.0.

If you have any Android accounts such as Google account, you can choose to backup your personal phone data into the account and then restore them when you get Android 7.0 in your phone.

Here we recommend you to backup your personal data from cellphone to PC, which would help to protect your privacy. You can try EaseUS MobiSaver for Android which is compatible with all Android devices and only three simple steps will backup all your data to PC:

Launch software and connect Android device with PC > Let software scan device > Preview and restore.
Please select a safe location in your PC to save your Android data and then you can follow next steps to perform Android 7.0 update now.

After you've backed up all important data to PC, let's see how to get Android 7.0 installed in your phone now:

See? This is it! This is all Android 7.0 or Android N update steps. After all these steps, all you need is to wait patiently to let the phone install new Android system.

Since Android 7.0/Android N is first opened to Nexus phones and Samsung, therefore, if you don't receive any update notice, please do remember to check up for it. Still no update information? Wait patiently. It will come.