RAID is a specific technique to store data to boost performance and minimize data loss. There are multiple RAID types that you can choose from just according to your requirements. RAID 3 is one of the most efficient types on the list.

This article will focus on this specific RAID technique and compare RAID 3, 4, and 5. Let's get started and check the following.

The definition of RAID 3

RAID 3 is a specific configuration of the disks to store the information safely. It is based on the Parity concept instead of stripping. It will keep the information stored on disk when the RAID controller generates it.

A single data file is available on only one disk in this configuration. It means it will not mirror the data to keep it on multiple disks. So, it might be possible that you will face slow processing while sending multiple data accessing requests simultaneously.

Like other RAID types, it also has some specific fields where it can work smoothly. You can use it for any purpose or application that demands long but sequential data transfer. It will keep your files saved and enable you to access them in a safe mode.

Now, you have got an idea about RAID 3. It is time to compare this configuration with others to learn which one will be better for you.

In RAID 3 configuration, the process for data saving involves Byte-level stripping technique. It will save data on multiple drives or disks. It can help in bulk data transfer from one disk to another generated by parity. Also, it will enable you to access data files from multiple disks side by side. 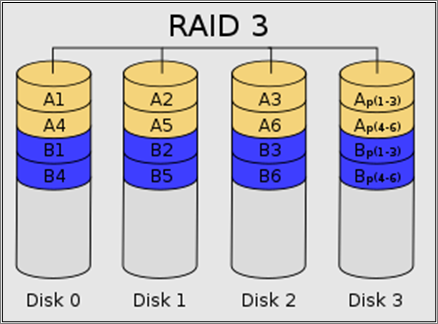 Conversely, the RAID 4 configuration will involve a block-level stripping technique. It will save the entire data block on a single disk and then use the parity technique to replicate it on multiple disks. It can help you process multiple tasks side by side without lowering the processing speed. 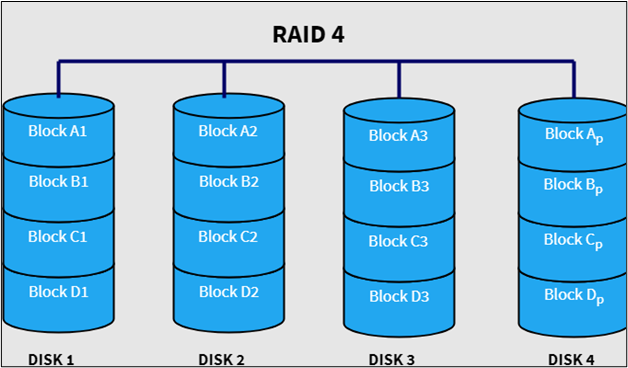 The only common thing between RAID 3 and RAID 4 is that both are effective in one disk failure. It means these techniques will not be enough to restore data if you got issues with more than one data drive.

As mentioned above, RAID 3 will enable you to overcome the issue of one disk failure. It will enable you to get access to files in this condition. The reason behind this is that this configuration will use a dedicated disk drive to save your data.

RAID 5 has no dedicated parity disks, which means it will not allow you to access data similarly. It is based on a specific concept of a rotating parity array. This configuration will enable you to access your data on any disk independently.

You will find a few specific properties in this type of RAID configuration. It will enable you to perform a few tasks or only one at a time. The main reason behind this is that it will use parity to save your data files on the same sections of the disks.

Therefore, it will not be possible for you to run multiple tasks and get output simultaneously.

Regarding Network Attached Storage (NAS), you should learn which type of RAID will suit you. Usually, we think that RAID 3 is the best because of its dedicated parity disks.

But it has some drawbacks like slow processing and not responding to simultaneous operations. To overcome such issues and provide you with better performance, RAID 5 is considered the best. The main feature of this configuration is its independent data access.

With the above discussion, you must know about RAID 3 and its difference from RAID 4 & 5. It would be better to learn about your needs to ensure that you get aid from the correct type of RAID.