[Quick Method] How to Record in GTA 5 Effortlessly?

Many people love the game GTA 5 (Grand Theft Auto Five), and some of them want to keep the happiness of playing this game by capturing the GTA 5 gameplay. Recording GTA 5 gameplay videos is not a troublesome task as the default recorder - Rockstar Editor allows players to capture their gameplay clips from GTA 5 directly. This handy recorder even allows users to edit their clips without leaving the game.

However, these merits of Rockstar don't represent that it covers up players' every need. For instance, the built-in gameplay recorder lacks the ability to produce high-quality videos with crisp resolution. That is why you need to find a more robust third-party recorder to make GTA 5 gameplay videos.

This post will tell viewers how to record in GTA 5 with two different recorders and how to boost GTA 5 to produce higher quality videos. Keep reading if you are interested in those topics.

How to Record GTA 5 with EaseUS RecExperts
How to Record in GTA 5 with Rockstar Editor
How to Boost Your Game - Professional Configuration Tips
Bonus Tip: How to Stop Recording in GTA

Part 1. How to Record GTA 5 with EaseUS RecExperts

GTA 5 is a beautifully designed open-world sandbox game. To perfectly show its charms,  a capable game recorder is necessary. EaseUS RecExperts for Windows is such a powerful game recorder that gamers would be pleased with.

EaseUS RecExperts offers users premium recording conditions, including up to 4K resolution, no-lag recording, high-quality videos, 60 FPS recording, multiple formats to output, etc. Besides, it delivers stable performance during recording. After recording, you can replay and edit your GTA 5 clips in this recorder. And if needed, you can trim the recorded videos with a built-in tool and edit out some parts.

This recorder is full-featured but lightweight, which means it would not slow down your device. If you want a recorder that is able to capture the gameplay with no lag, this is what you need. Don't hesitate to download it.

With this recorder for GTA V recording, you can directly replay and edit your gameplay recordings once the capture is done. However, if you are not a big fan of functional game recorders, you should try a less powerful yet easy-to-use default recorder of GTA 5 - the Rockstar Editor.

Part 2. How to Record in GTA 5 with Rockstar Editor

The Rockstar Editor is an iteration of GTA 4's "Replay" feature. Shortly after its addition to GTA 5's PC version, Rockstar Editor is embedded into the Xbox One and PlayStation 4 on 15 September 2015. And this part will elaborate on the steps to record/edit GTA 5 gameplay clips with Rockstar.

Note that only GTA 5 is blessed with the built-in recorder - Rockstar Editor. If you want to record other GTA series, you should probably use other recorders. Here I will show you how to capture the GTA 5 videos on PC with its exclusive recorder. 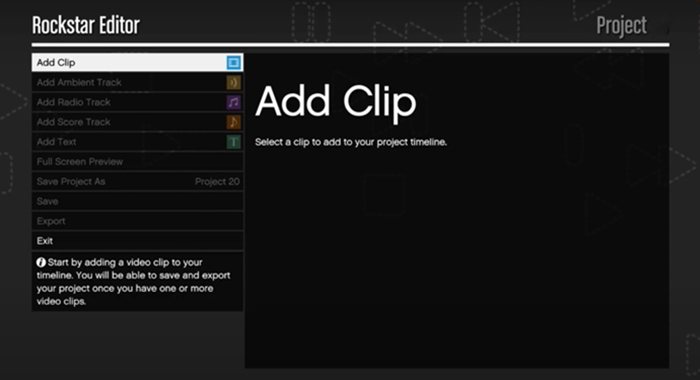 Step 1. Hold ALT and press F1 to start and stop recording during gameplay.

Step 3. Press Left Alt, and F1 will save the recording.

 Tip
1. The recording length could vary due to your current situation. If you are in a messy scene (gunfight, vehicle chasing, etc.), the clip will be shorter. If your status is slack and easy, the clips will be longer.
2. You can disable the auto-recording function by pressing F3 on your PC. This action will reduce the heavy burden of your FPS.

How to Edit GTA 5 Videos with Rockstar Editor

Actually, the editing features are quite simple. The common functions like adding camera filters and adding music to recordings are available, but they are clearly not enough. If you are looking for advanced experience, you can consider using a professional video editor like EaseUS Video Editor.

Also, gameplay, in a first-person perspective mode, cannot have access to the editing function of the editor

Method of GTA 5 Recording on PS4/Xbox One

Step 1. To bring up the character switch menu on consoles, press the "Down" button on the D-Pad. Then press the corresponding button for "Start" or "Stop Recording."

Step 2. You can edit your clips. Call out the Pause Menu and then scroll over to the extreme right so that you can find the Editor.

Step 3. If you want to preview your clips, select "Clip Management" from the menu.

Part 3. How to Boost Your Game - Professional Configuration Tips

Now we already have two practical tools to record our GTA 5 gameplay. Here are some tips for improving GTA 5 performance. These tips are meaningful since better game performance brews higher-quality gameplay clips.

To Boost GTA5, You Need to Choose Between Graphics and FPS

Some elements play decisive roles in your games' performance. They could be Graphics, FPS, and Game Mods. In the process of tweaking these parameters, there is one thing you should be aware of, which is the highest FPS and the best Graphics card settings can't be obtained at the same time.

If you want the best graphics, you'll likely have to accept lower FPS. On the contrary, optimizing your game for FPS often results in a few graphical sacrifices. So you'll need to balance your gaming expectations with your PC's capabilities.

For optimizing your PC and laptop for better gaming performance, there are four things you could do to your PC to improve the performance of your GTA 5. 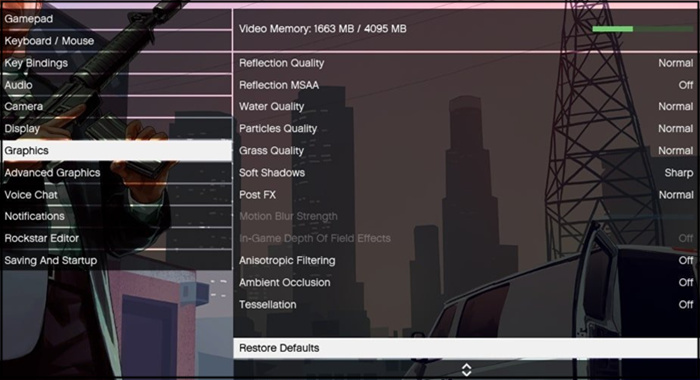 Rockstar's world-building is among the best in the business. With the perfect balance between FPS and the graphics card, you can play this game with no latency while enjoying the exclaiming sights along the roads.

Bonus Tip: How to Stop Recording in GTA

As mentioned above, GTA is integrated with a built-in gameplay recorder that enables you to start or stop recording by pressing the keys on your keyboard. However, sometimes people who don't know the key combination may press those by accident, but they don't know how to stop the recording.

Due to many reasons, it's advisable to stop the GTA online recording, and the steps to stop it is straightforward.

This post gives thorough guidance on how to record in GTA 5. Two quick methods of GTA 5 recording are involved in this post to help users capture their own GTA 5 gameplay videos, whether on PC or consoles (PS4, Xbox One). All in all, if you pursue smooth and high-quality game clips, EaseUS RecExperts will meet your demands.