Facebook is one of the most popular and biggest social media platforms on the internet. Sometimes you may want to record the Facebook video call to keep the precious moments with your families or capture your favorite Facebook streaming videos. But, which is the best way to do that?

How to Record Facebook Video Calls/Live Videos on Windows PC

EaseUS RecExperts for Windows could be the first choice for recording video and audio on a Windows PC as it is compatible with most versions of Windows OS, such as Windows 10/8.1/8/7 and even Windows 11.

The video quality of output video might be the top concern of many people who want to record videos. If you want to record a Facebook video of high resolution, EaseUS RecExperts is great for you. This software is also a tool that can help when you are wondering about how to record Zoom meeting without permission.

In addition to that, you can choose the sound source freely. It's able to record the video with its original sound, your own voice, or both of those sounds simultaneously. If you want to record the webcam as an overlay for the video, this recorder can also be useful. All in all, you can capture anything on Facebook using this great recorder.

This recorder is suitable for any occasion. You can use it to record video from Facebook, YouTube, and Netflix with ease. Before following the tutorial, click on the button below to download it for free. 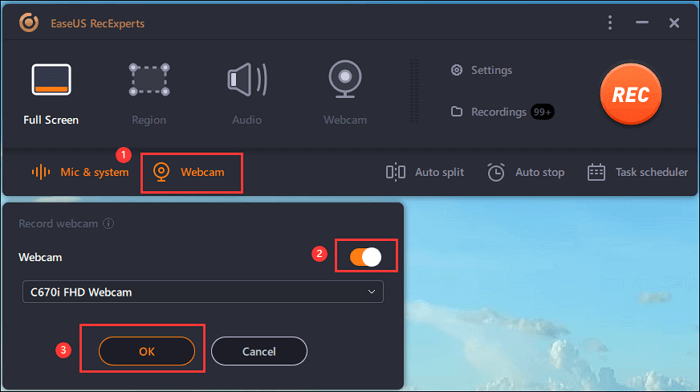 Feel it's difficult to record someone's Instagram live? This post will make it easy for everyone with some screen recording software.

How to Record Facebook Live Videos/Video Call on iPhone/iPad

Can you record Facebook video calls on iOS devices without downloading any other application? It is straightforward for iPhone or iPad users to record a Facebook video with the device itself.

If your iPhone or iPad is in iOS 11 or 12, you can do the task easily, as recording screen and audio are the stunning features of it. It is a perfect way to help record video from Facebook on your iPhone and iPad for most users. Do you want to know how to record a Facebook video with an iOS screen recorder? Check the following tutorial steps. 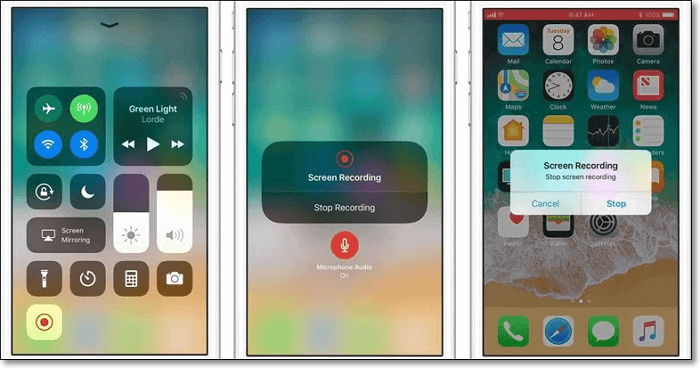 How to Record Facebook Messenger Video Calls on iPhone:

How to Record Facebook Live Video on Android Phone

DU Recorder is a Facebook video recorder that allows you to record a video of whatever is happening on your Android screen. If you need to record a Facebook video call or some live streaming videos n your Android, you can not miss this app. Using it, you can easily record gameplay, video calls, or some other streaming videos on your mobile phone directly. Also, once you have recorded the video, you can edit it with the editing tool supported by the application, like trimming, merging, or adding music.

This application offers you many options to adjust the video's quality, resolution, FPS (up to 60 FPS), and many more. It is a fantastic application for you to register everything and anything you can do on your Android screen.

Here's How to Record Facebook Live Video on Android:

Step 2. Open DU Recorder, and you will see the record window. Click the start button and record your video call or live streaming video.

Step 3. Click the stop button when you want to stop recording.

How to Record a Facebook Live Video/Video Call on Mac

For Mac users, many fantastic screen recorders can help your record Facebook video calls on the market, and some are free, some are paid. Given that many of you may be searching for great Facebook call recorders to do the task, we will show you two useful screen recording software - EaseUS RecExperts for Mac and QuickTime Player.

Except for Windows PC, EaseUS RecExperts also can run on Mac easily. You can capture Facebook video calls and live streaming videos in any size you need with this Facebook video recorder. Also, with its help, you are able to take screenshots to keep some brilliant moments while recording. Last but least, there is an inbuilt player that enables you to preview your recordings with one click.

QuickTime Player is a wonderful media player for Mac users. You can play various format files with it. Is it only a player? Of course not. This freeware also can help you do many basic screen recording activities, like capturing video calls or making simple tutorials. If you are going to record Facebook video call, check the below steps.

How to Record Live on Facebook with QuickTime Player on Mac:

Step 2. Click the small triangle button to adjust the settings. At the same time, you can join a Facebook video call or play a streaming Facebook video.

Step 3. Click the red button to start the Facebook video, and you can choose to capture the entire screen or customized area of it.

Step 4. Choose the "Stop" button on the menu bar to stop recording. Later, you can get the recording video file in the *.MOV format.

All of the Facebook call recorders and live video recorders mentioned in this article can help you record Facebook video calls or live videos without any effort. According to your system OS and your needs, choose the best software to do the task.

For all the screen recording software, you can not miss EaseUS RecExperts. You can record videos of lives and calls on Facebook with a few simple clicks. What's more, there will not be a watermark on the recorded videos.