5 Ways on How to Record Clash of Clans

Clash of Clans is a free-to-play mobile video game that is super addictive to some people. In this game, the player is a chief of a village who can build up his very own clan and then go to wars. Enjoying it, many players even record their gameplay and upload it on YouTube or other social platforms. Unluckily, there is no strong in-built recorder available in clash of clans that allows you to conveniently record the gameplay videos.

But no worries, there are loads of gameplay recorders on the internet. Since Clash of Clans is available on both iPhone and Android phones, we give you some screen recorder apps that can run on Android, iPhone, and Windows. All you need to do is to download the one that is the most suitable for you and start recording your excellent gameplay.

Although Clash of Clans is mostly used on mobile phones, some people download and play this game on a Windows PC. Therefore, we give you the game recording tool that is compatible with the Windows system. This screen recording software is called EaseUS RecExperts.

Available for Windows 7/8/8.1/10, EaseUS RecExperts can be used to record all your activities during the game. Capturing video, audio, and the webcam at the same time is just a piece of cake. If you want it to record your gameplay automatically, just set a start time beforehand. Also, you can set the frame rate freely to get the highest quality of the recorded videos.

Now, you may download EaseUS RecExperts and follow the tutorial below to record your gameplay. The steps for recording all games are the same.

To help the Android Clash of Clans users record their gameplay, we find three screen recorders that are compatible with the Android system and list them in this part. All you need to do is to read the related information and choose one to download from Google Play Store.

Game Screen Recorder in Google Play is a capable recorder app for gameplay and screen activities. You can record your gameplay as videos without rooting the phone, and easily share them with your friends. It can automatically identify the game on your phone without a time limit.

AZ Screen Recorder is a stable, high-quality screen recorder for Android that helps you record gameplay as smooth and clear videos. It is capable of capturing Android phone screen, recording screen and saving it as a video, editing the videos recorded, recording live stream screen, etc. Therefore, this screen recording app can be used to record and make video tutorials, online lessons, live talk shows, etc.

After recording the device screen, you can edit your videos with editing functions like trim, merge, crop, rotate, compress, add background music, add subtitles, etc. You can also convert videos to GIFs if you want.

3. Record with With X Recorder

X Recorder helps you capture your screen as smooth and clear screen videos. Also, it offers the easiest way to take screenshots. With X Recorder, you can record gameplay videos with no recording time limits and root needed.

Just with a tap on the floating window, you can record HD video tutorials, video calls, and videos that can not be downloaded. Since there is no watermark, you can make a clean video or screenshot. Download X Recorder to capture your gameplay.

If you have enough space on your phone, you don’t need extra tools to download and install. iOS device has a built-in screen recorder to help you capture any activities that happened on the screen. If you want to capture your game playing on Clash of Clans, just open this function when you need to record the gaming screen.

To record your gameplay with this inbuilt function, you need to add this function to the control center of your phone. Just open the Settings app, choose Control Center, tap on Customize Controls, and locate the Screen Recording option to add it to Control Center.

When you play Clash of Clan on your iPhone and want to capture your game playing, arise Control Center and choose this screen recorder to start the recording with ease. 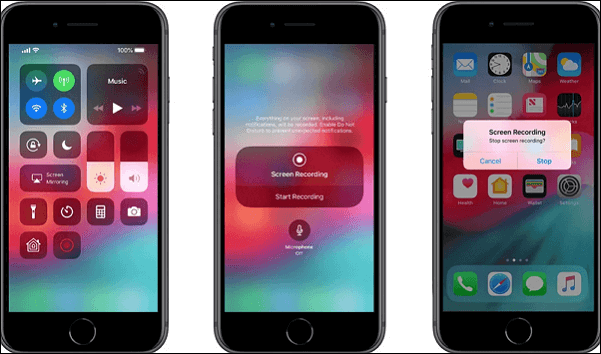 As shown in the content above, you can record the Clash of Clans gameplay on whatever systems you are using, Windows, iOS, or Android. The only thing you need to worry about is finding an appropriate gaming screen recorder. In this article, we give you 5 screen recorders that can be used on different systems and devices. If you want to have a big view and a clearer video, we recommend you to download EaseUS RecExperts and record Clash of Clans with it now!