How to Record PS3 Gameplay with a Laptop

When playing PS3 games, is there any precious moment you can record and share with others? Some people like to capture the gameplay when they gain a trophy which is hard to get or record the screen to teach others the skills to complete a level. In all those situations, a powerful PS3 game recorder is indispensable.

There are multiple ways to capture the gameplay for people who use a computer screen or a laptop as the monitor for playing PS3 games. This post will tell you how to record PS3 gameplay with a laptop in 3 ways. Whether you have a capture card or not, there must be a suitable method for you. Read to know the detailed steps.

1. How to Record PS3 Gameplay Without Capture Card on Laptop

Many people believe that you must have a capture card to use a laptop as the monitor when playing PS3 games. However, as a matter of fact, the laptop with an "HDMI in" port allows you to connect the PS3 console directly with the laptop using an HDMI cable. With a compatible video port or an adapter, you can use the computer screen and television as a monitor to play PS3 games. But if you only have a DVI port instead of an HDMI port, an HDMI-to-DVI adapter is necessary.

Method 1. How to Record PS3 Gameplay with EaseUS RecExperts

After connecting the PS3 console with your laptop, the next is finding an excellent screen recorder compatible with your device. If you are using a laptop with Windows 11/10/8/7, EaseUS RecExperts is the optimal choice. This screen recorder is lightweight, and you never need to worry that it will slow down your computer. And the video quality of the output video is outstanding, and the resolution of the captured video can be up to 4k or 1080P.

Moreover, this software supports recording the gameplay and your webcam at the same time so that you can make a game video as easy as possible. Other tools are also available, such as a Task Scheduler that helps the gameplay automatically.

This software is what you can never miss for capturing PS3 gameplay on a laptop. Click on this button for free download now.

How to Record PS3 Gameplay with PC Without Capture Card:

Method 2. How to Record Gameplay on PS3 Using OBS Studio

There is another famous screen recorder, which is named OBS Studio, that supports capturing PS3 gameplay on the laptop without a capture card. Compared with EaseUS RecExperts, OBS Studio is professional PS3 recording software that fits the needs of experienced users or Twitch streamers. The interface of OBS is relatively complex than its alternatives designed for beginners, and you may have to spend a lot of time learning the skills in handling this software.

OBS Studio is what you need if you require a high-quality audio track for your recordings. This software offers you an advanced audio mixer that integrates many audio filters for noise reduction or other purposes. Before recording the PS3 gameplay, don't forget to adjust the settings and choose a suitable resolution, bitrate, etc.

How to Record PS3 Gameplay with a Laptop Using OBS Studio:

Step 1. Connect the PS3 console to your laptop using an HDMI cable.

Step 2. Launch OBS Studio on your laptop. And click on "File" > "Settings" to adjust the options, such as video quality, bitrate, etc.

Step 3. Select the suitable source for capturing the PS3 gameplay. For example, you can choose "Display Capture" as the video source.

Step 4. There are many options under the "Controls" tab. Select the "Start Recording" option to capture the PS3 gameplay on your laptop without a capture card.

2. How to Record Gameplay on PS3 with a Capture Card

The first step for recording PS3 gameplay using a capture card is to connect the capture card as a transfer station of the PS3 console and the computer. You can follow the following steps to connect those devices to each other and use powerful PS3 recording software to capture the gameplay. 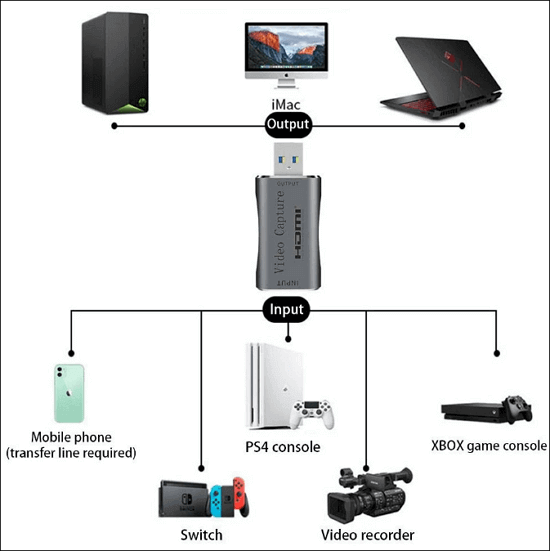 Step 1. Plug one end of the HDMI cable into the "HDMI OUT" port of the PS3 console, and connect the other end of this HDMI cable with the capture card via the "HDMI IN" port.

Step 2. Then, connect the capture card to your screen or laptop using the included USB cable.

Step 3. Some capture cards, such as Elgato, offer you related apps, including a webcam recorder, streaming software, and a screen recorder. You can download it from the website of the capture card you are using.

How to Record Gameplay on PC

If you want to know the steps to record PS3 gameplay on a computer using EaseUS RecExperts, click on this post to get the tutorial.