Free | How to Record Netflix on PC, Mac, and Phone

Netflix is one of the best video streaming services right now, with some fantastic video series. While it offers to download it for offline viewing, it is only available for smartphones. We often like to download movies and series on the computer and watch them later without the internet. Once you have the video on the computer, you can share it with your family and even cast it on TV, Xbox, and other DLNA devices.

This post will teach you how to record Netflix on Windows 10 PC, Mac, iPhone, and Android. Go on reading to find the method that suits your needs best.

How to Screen Record Netflix on Windows 10

EaseUS RecExperts for Windows is a powerful screen capturing tool that can record whatever is on the screen, such as videos, streaming audio, and so on. If you play the Netflix video in full-screen mode, you can launch this streaming video recorder and select the "Full Screen" option on the main interface to capture what you need.

Apart from that, this Windows screen recorder allows you to record audio and webcam as well. And you can even set a specific time to start the recording when you have something else to do. Once the recording is complete, it enables you to preview, rename, and trim the video clips directly.

This Windows screen recorder allows you to capture all live streaming videos with ease. Just click the below button to get it.

 Important
The provider protects some video content against recording, and RecExperts observes this protection. It never accesses encrypted video data and is not able to record and save such content. So this screen recorder can only capture the video contents that are not the DRM protection against the recording.

Here is how to record Netflix on PC with EaseUS RecExperts:

Step 1. Open Netflix in your browser and launch EaseUS RecExperts.

Step 3. After selecting the recording area, tap on the icon on the bottom left side. Then, there will be options that you can choose and set as the sound source. Click on "REC" to start recording.

Step 4. There will be a toolbar during the recording, and it would offer you options to pause or stop the recording process. The camera icon is for taking a screenshot, while the timer icon is for scheduling a recording task.

The videos and pictures you captured will be stored on your device. After the recording, a window will appear to help you preview and edit them.

How to Record Movies from Netflix on Mac [2 Picks]

When it comes to Mac, there are lots of Mac Netflix screen capture software you can use. We have tested various screen recording programs, and here we pick the top 2 best screen recorders for Mac to share with you.

This best streaming video recorder for Mac allows you to capture Netflix streaming videos with simple clicks. You can capture Netflix movies in full screen or part of the screen. While recording, you also can record your microphone to add narrations to your recordings. What's more, it allows you to record webcam with an internal or external webcam.

If you want to record the Netflix videos at a specific time, the task scheduler can help. You only need to set the start time, duration of the task, or end time to create your own recording task, and this software will start recording automatically.

 Important
The provider protects some video content against recording, and RecExperts observes this protection. It never accesses encrypted video data and is not able to record and save such content. So this screen recorder can only capture the video contents that are not the DRM protection against the recording.

At the same time, to record the screen with audio, you just hit the Sound icon in the lower left corner.

Step 2. Click "Settings" to apply more options, including changing the output format of a video, etc. Then, go back to the main interface and click the "REC" button to get started.

Step 3. During the capturing process, you can take a screenshot of the recorded screen. To finish recording, hit the Stop button from the toolbar.

Step 4. Then, you can watch the recorded video in "Recordings". The button can be found in the main interface. You can review the target recording from the lists.

Another way to record Netflix free is to use OBS Studio. It's a free and open-source software for both recording and live streaming. The software offers high performance and real video and audio capturing. You can even record for multiple sources, but that will be too much for everyone. In noise, you can use the audio mixer with filters such as noise gate, suppress, and gain.

Lastly, settings offer configuration to tweak every aspect of the recording and broadcast. When you set it up for the first time, you can optimize only for recording instead of broadcasting. 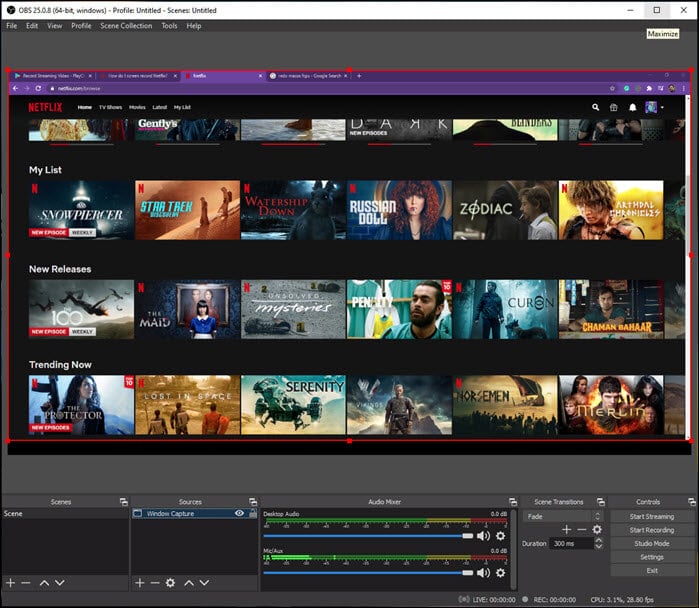 Here is how to record Netflix shows using OBS Studio:

Step 1. Open Netflix in the browser, and set up the video you want to record. Then launch the OBS software, and click on the "+ " sign under Sources.

Step 2. Add a name to the window, and it will automatically select the active Netflix window. Set up the rest of the options.

Step 3. Start playing video, and immediately click on the Start Recording button. Once done, the Netflix video will be saved on your Mac.

How to Capture Netflix Streaming Videos on iPhone

There is an entirely free way to record movies from Netflix on iPhone using the iOS screen recorder. If your iPhone runs in iOS 11 or later, you can record video from Netflix in a few simple steps like below.

Step by step tutorial to capture Netflix for free:

Step 1. Open the Netflix show that you want to record on your iPhone.

Step 2. Swipe up from the bottom of the screen, find the Screen Recorder icon, and click on it. Once done, your video will start to be recorded.

Step 3. When you want to stop the recording, click on the red button in the floating recording control to end it.

How to Record Movies from Netflix Free on Android

If you have a smartphone with Android 10 or a later version, you can record Netflix with the built-in screen recorder. If not, you need to install an Android screen recorder app like AZ Screen Recorder.

This app is a stable and high-quality screen recorder for Android users to capture smooth and clear screen videos. With this app, you can easily make video tutorials, game videos, live shows, etc.

How to ripping movies from Netflix on Android phone:

Step 1. Download and install this app on your Android phone, then open the Netflix video.

Step 3. Once done, you can click the stopping button to end the recording.

How to Screen Record on Netflix Online

If you do not want to install software to record whatever is playing on Netflix, a browser tool is perfect. Screen Recorder App is a Chrome browser extension that can record everything you are playing through the browser, including Netflix. You can also use this extension to screen recording, but it works efficiently when it comes to tab recording of the browser.

Apart from this, the browser also supports audio recording, webcam recording, application recording, and only tab-based recording. You can choose between system and Microphone recording for the best results. 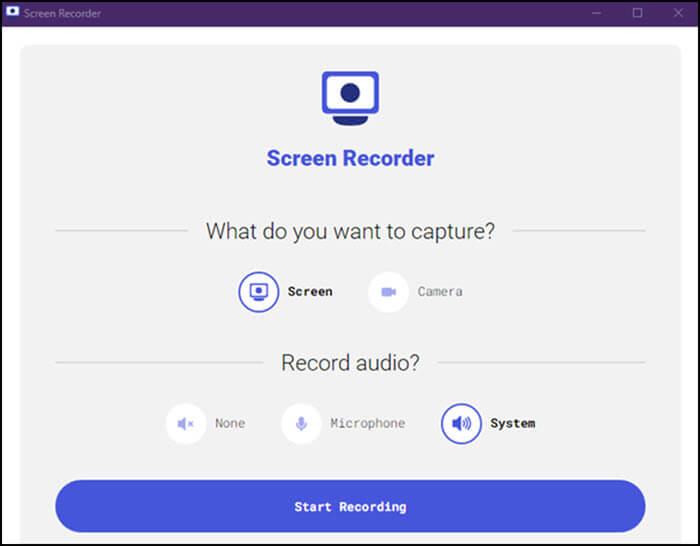 Step 1. Install the Chrome Extension and then Open Netflix in the browser. Choose the video or series you want to record and set it to start playing. Next, click on the Chrome extension to prepare for recording.

Step 2. Select Screen, System sound, and click on the Start Recording button. Here you will have the option to select the entire screen (supports multiple screens), an application window, or Chrome Tab. The latter option is the best way to record Netflix as it will keep away from any distractions on the screen.

Step 3. Once done, you can click on stop recording and save the video on the computer. Make sure you have configured the system sound correctly. Else the video will be without any sound.

The only free way to record Netflix on iPhone and Android is by using the built-in video downloader. Netflix offers you to pre-download series and movies for offline viewing. It comes in handy during long flights and travels. This feature is also available for Windows if they use the app from the Microsoft store. Most screen recording apps will not work on Android and iPhone as the app is protected against such recording. There is a DVR app available, but it doesn't allow you to record without paying. 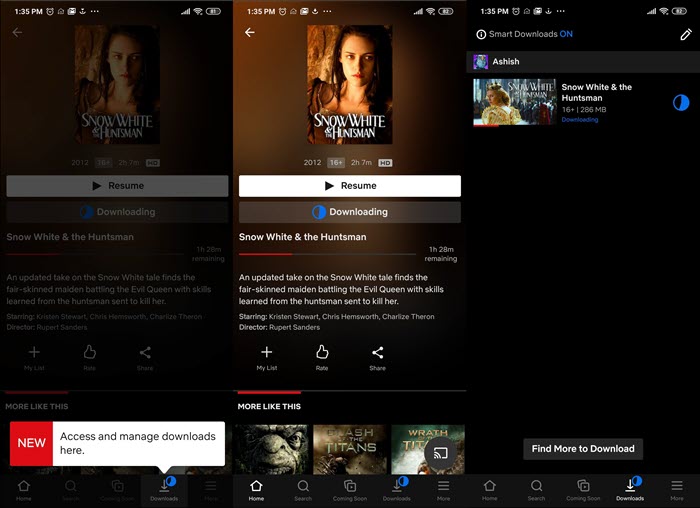 Step 1. Open the Netflix app, sign in, and select the profile you want to download the video on your phone.

Step 2. Next, select the series or the movie you want to download to open its dedicated section. Under the Play/Resume button, there will be a download option as well. Tap on it to start downloading.

Step 3. Once the download is complete, switch to the downloads section, and you play and even stream it to your smart TV or DLNA capable device.

The same steps apply for both iPhone and Android devices as the app is the same on both platforms. The quality of the download will depend on the subscription plan. If you have taken one of the top-tier plans, you will download it in HD format.

There are many ways to record Netflix on all types of devices. Mobile devices have an easy way to download video files officially, but there is nothing close for Windows, macOS, and online streaming. That's where EaseUS RecExperts come into the picture. It can record anything streamed through the browsers and keep the audio quality at best using system audio. It is better to pick up EaseUS RecExperts as your choice because it offers multiple functionalities.

FAQs About How to Record Netflix

1. Can you record from Netflix?

Yes, you can record streaming videos or shows from Netflix by using some screen recording software. To capture Netflix on the computer, you can try EaseUS RecExperts, OBS Studio, etc., to complete the task. If you want to save it on your mobile phone, you can directly download Netflix videos within the app.

2. Is it illegal to screen record Netflix?

It's illegal if you screen record discs on Netflix because you are breaking the copy protection.

If you capture the streaming videos from Netflix with some screen recording software, that's legal. Although it is against their terms of service, it is legal.

3. Can I record Netflix on my DVR?

No, Netflix does not allow you to record shows with DVR, but you can capture Netflix with some screen capture software.