2022 | How to Record LoL Game with High Quality

League of Legends (LoL) is one of the most popular gameplays all over the world. An increasing number of people are watching tutorial videos to play it better. If you are one of the game masters who want to create a tutorial video, have the best game recording software complete the task. This post shares four incredible LoL game recorders with you, which capture gameplay without lag or other restrictions.

Step 1. Perform LoL you want to capture and open the game screen recorder.

How to Screen Record LoL with Windows Game Bar

For Windows 10 users, there is a built-in LoL game recorder. You can use it to capture any gameplay you like on a desktop. To use it conveniently, it offers you options to set the hotkeys.

After recording, you can share the gameplay videos to popular social media platforms like YouTube with simple clicks. Below is the instruction about how to capture LoL on a PC with this built-in tool. 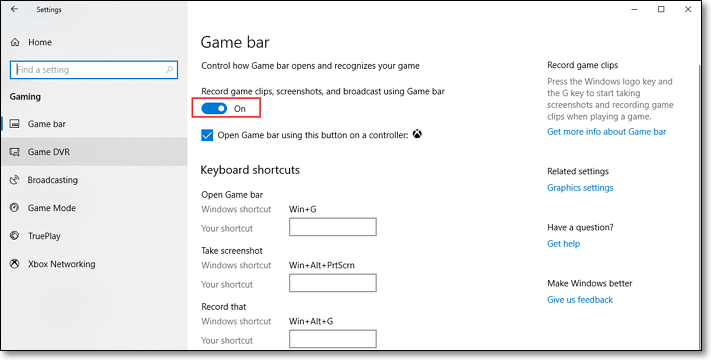 Step 1. Hit the Windows icon on your keyboard and choose the "Settings" > "Gaming" on the screen.

Step 2. After the Game bar window appears, turn on the Record the Game bar button. Then, set the keyboard shortcuts according to your needs.

Step 3. Once the setting is done, open the LoL game and capture the screen by pressing "Win + Alt + R".

EaseUS RecExperts is a fantastic LoL game recorder. This Windows screen recorder enables to capture games like LoL in high quality easily. In its advanced settings, you are allowed to set the output format, quality, and frame rate of the output video. Also, setting the bitrate and sampling rate of audio is accessible.

While capturing the gameplay, you can record screen and webcam, and capture the microphone voice to add more effects. Meanwhile, this tool provides you with a feature to take a screenshot from the saved video.

Now, download this effective tool and create an amazing game video by yourself!

How to Record LoL Gameplay with EaseUS RecExperts for Mac

EaseUS RecExperts is the best solution for those who want LoL capturing on macOS. This Mac game recorder lets you capture it with high quality. You can add audio, including the internal and external sound.

Besides, it's a good helper to capture video conferencing meetings, streaming audio, YouTube videos, or other activities on Mac. Most importantly, it offers you a Task Scheduler that enables you to record the gameplay automatically. Don't miss this lightweight gameplay recorder on Mac. Click on the button to download it.

Steps for League of Legends recording on Mac:

How to Record League of Legends with OBS Studio

OBS Studio is an open-source LoL game recorder for Windows and Mac users. This software lets you capture the LoL game in high quality and capture live streaming audio and video and any area of your screen. However, it is a little complicated for beginners. Follow the below guide to know how to capture LoL games with OBS Studio.

A guide for you to screen record League of Legends gameplay, using OBS Studio:

Step 1. Open OBS Studio and set your games to Windowed or Borderless under the video settings.

Step 2. Choose the "Preview Stream" to check whether LoL gameplay has already been streamed to OBS Studio. If not, you can click "Settings" to broadcast the gameplay to other channels.

Meanwhile, to capture gameplay more efficiently, set the hotkeys as you like.

Step 3. Perform the game and click the "Start Recording" to start the task. To stop it, use the hotkey you set.

This post has introduced four reliable LoL gameplay recorders and detail on how to record LoL game with them. You can pick any one of them according to your needs.

If you are a professional user, try OBS Studio. For a beginner, EaseUS RecExperts is your best choice.

FAQs About How to Record LoL Game

Don't miss this part if you want to know more information about capturing LoL gameplay.

1. How do I record myself playing games?

To record yourself playing games, choose a tool that allows capturing your screen and webcam simultaneously. Screen recorders like OBS, EaseUS RecExperts, or other tools offering the features can be your choice.

2. How do I record League of Legends for Youtube?

First, you need an LoL game recorder like OBS, Game Bar, EaseUS RecExperts, etc. You can use this kind of screen recording software to capture League of Legends for YouTube.

3. Is League of Legends a dead game?

League of Legends is certainly not a dead game. In fact, it is paving the way for the gaming industry and eSports to break out of its niche audience and into mainstream media.