How to Record Calls on Google Voice on Phone/Desktop

With the development of technology, an increasing number of new communication methods emerge. You can conveniently talk with friends in the distance using Google Voice. But how to record calls on Google Voice?

For capturing Google Voice calls, prepare a competent recorder that is compatible with your mobile phone or computer. Then, understand the related process to capture calls. In this post, you can find the best resolution.

How to Record on Google Voice on iPhone

The Google Voice application for iOS offers a pre-installed function to capture calls. While some people want to record the calls with a third party to change some configurations to make the recordings more satisfying.

The first thing to note is that you can use this built-in recording tool for incoming calls. And before that, you need to activate this function and open the Settings interface. Choose Calls and then tap the Incoming call options. 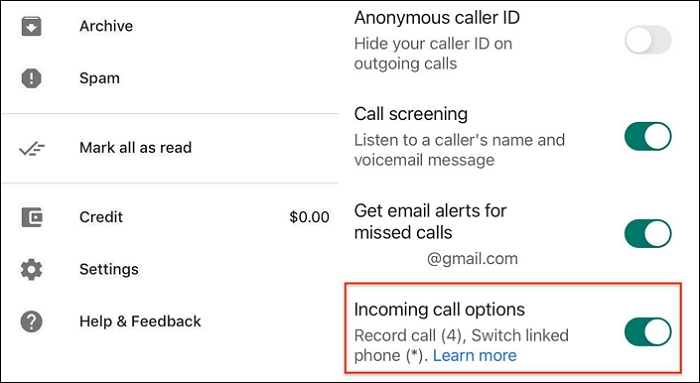 To record incoming calls with Google Voice on iPhone:

Step 1. Open this tool and go to the homepage of Google Voice.

Step 2. Find Settings on the upper left side. Then, hit "Calls".

Step 3. Scroll down the menu to find the "Incoming call options".

Step 4. Enable that option. It records your voice at the time you press the number 4 during the phone call.

How to Record a Google Voice Call on Android

How to record phone calls on Google Voice on Android? Similar to iPhone, try the same method to capture Google Voice. So, here introduces the tutorial of Google Voice recording using a third-party application.

Automatic Call Recorder is a useful Google Voice recorder on Android. You can choose which calls are recorded and ignored, and then this application can record the calls automatically. After that, you can view the recorded calls and even share them with others.

Step 1. Launch the application and select the Voice Recorder option in the left sidebar.

Step 3. Change the recordings' format in the Settings. Tap "File type" to customize.

Step 4. Send the audio by choosing the Share icon. You can share it with some social media platforms.

How to Record Calls on Google Voice on Windows

When using a Windows computer, you can have a Google Voice call on the webpage. It's worth noting that you can't use this service unless you have a U.S. phone number that can forward calls after ringing. Then, you should find a recording tool that captures both the system and external sounds.

EaseUS RecExperts for Windows is recommended to you since it meets all the requirements. When recording Google Voice calls with it, you can select the audio sources freely. Choose to record sound from computer, a microphone, or record both of them simultaneously. Most importantly, it won't send any notification.

How to Record a Call on Google Voice on Mac

To capture Google Voice calls on Mac, choose Audacity, which is a very famous cross-platform program. Since it's a powerful application, you can use it to edit and record audio on many operating systems. Moreover, its community support can help improve it continually so that you can have a great experience using it.

This audio recorder provides you with effects you can add to your recordings. Such as cutting, copying, pasting, and removing the clips. After that, export the audio in a suitable format. 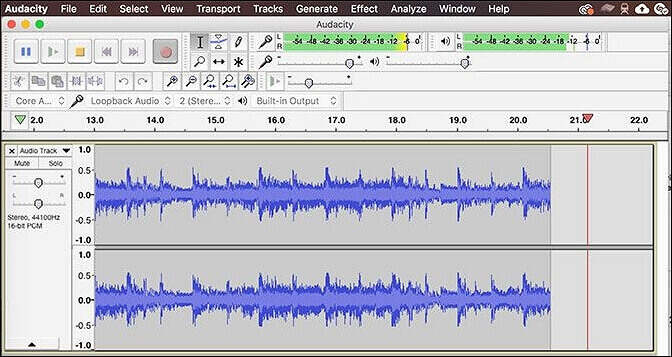 Tutorial for how to record calls on Google Voice, using Audacity:

Step 1. Download Audacity and Open the Google Voice on Mac.

Step 2. Open Audacity and select the audio recording icon from the main interface.

Step 3. Start your calls on Google Voice. The Audacity is now capturing what you are saying.

Step 4. To stop the recording, click the red icon in the top toolbar and save the recorded audio.