Nowadays, You probably have been using Windows 10 for a long time, however, you might not know everything it offers. There are lots of hidden built-in features Windows 10 provides to improve your using experience. And one of these built-in functions is screen recording.

How to Enable and Use Windows 10 Built-in Screen Recorder

There is an inbuilt screen recorder in Windows 10, and it is called "Game Bar".
As its name implies, this program is mostly used for game recording. However, apart from that, it is also can do more than just gaming. For example, with its help, you can easily record screens on your Windows computer or take screenshots on Windows 10 with hotkeys in seconds. Well, the word does not say more! Next, let's learn how to enable this Windows 10 built-in recording feature.

If you haven't used this function before, you may have no idea to find and launch the built-in screen recording program. So check out the following methods to launch this program first.

Step 1. Click the Windows icon and select the gear button to open the Setting menu.

Step 2. Click on the "Gaming" option in Windows Settings. Then click "Game bar" and make sure it's set to On, as shown below. 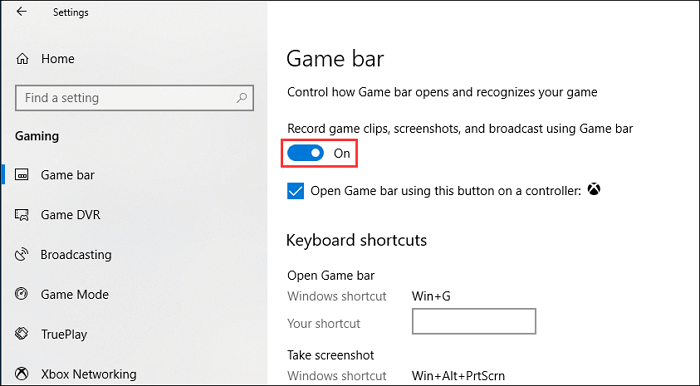 After enabling the Game bar, you can start recording videos, games, or other items now.

Step 1. Press "Win+G" to open the Game bar. If required, select the "Yes, this is a game" checkbox.

Step 2. Press the "Start/Stop Recording" button to start/stop a recording. Use the "Turn Microphone On/Off" button to toggle the microphone if you wish. 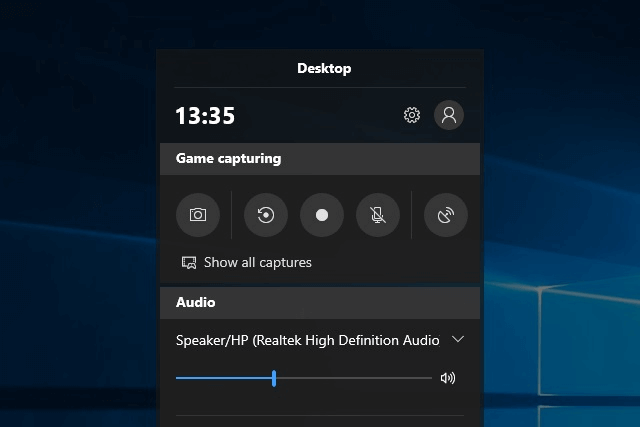 Step 3. After recording, trim your video or rename it in the Xbox app. Your video will be saved in the "Captures folder", which is in your "Videos" folder by default.

If you are in need of some useful screen recorders, this is what you want. Here we listed five effective screen recording programs. Let's have a look at them.

For an easy yet professional screen recorder, you cannot miss EaseUS RecExperts, a program like the Windows built in screen recorder. With an intuitive user interface and workflow, it is easy to use. While working with this software, you are able to record part of screen or full screen as you want. In addition, you can choose to capture the screen with or without audio.

Better than this inbuilt Windows screen recorder, this program allows you to create schedule recording tasks, modify recordings, and export them in various formats. All in all, almost all your recordings needs will be satisfied here.

ActivePresenter is an all-in-one screen recorder and video editor for Windows. It has virtually all the features and effects you may need to record screen and edit videos.

The free version of ActivePresenter is free of charge with no watermark or time restriction. After the capture phase, you're allowed to trim, cut, split your recording, change the speed and volume, add closed captions, and more. More advanced audio and video editing features are available to create impressive videos, and software simulations are available only when you upgrade to the paid version.

OBS Studio is a free screen recording software for video recording and live streaming without a watermark or time limit. Using OBS Studio, you can capture not only the entire display or a window but also from webcam and microphone. When it comes to streaming, the program lets you select which desktop applications and audio sources to share and create layered videos for the webcam.

Flashback Express is a free screen capture software that can record screen, webcam, and sounds. It neither sets a time limit on recording nor stamps watermark on the output videos. You can either record screens across multiple monitors or limit capturing to a single monitor. Y

ou can also make use of scheduled recordings to start and stop recording at scheduled times or when a specified application is launched. The free version doesn't include any video editing features, annotations, or effects. After recording, users can save videos like MP4, AVI, or WMV and directly upload videos to YouTube. 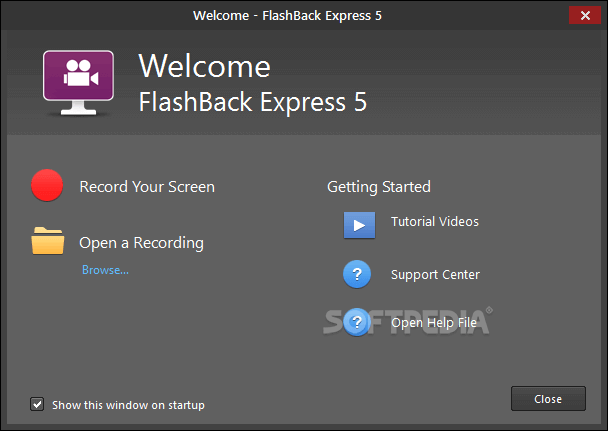 Camtasia is one of the highest-priced screen capture software at present. As an all-in-one screen recorder and video editor, Camtasia comes with a collection of brand-new video assets such as customizable intros, outros, etc. It also includes a number of themes to maintain a consistent look and feel across a series of videos.

You can edit a video directly after you finish recording with basic video editing functions. A 30-day free trial is available with watermark added. If you want a more comprehensive service from it, you need to upgrade to a paid version.

To sum up, Windows 10 has a built-in screen recorder, and we gave you the detailed steps of operating it. You may use it directly to record the screen, or you may use some other screen recorders to record the screen and make more advanced editing to the recorded files. Among the recorders recommended, EaseUS RecExperts is definitely the best choice for Windows beginners. You may go to the official website and download it.