While there are many reasons you would want to record the screen of your iPhone or iPad, there are some common reasons amongst many users. One of these reasons is that you want to teach people how they can do something on their iPhone or iPad. You can create an app tutorial by recording your iOS device's screen. The other common reason is that you want to show your gaming skills to your friends. You can fire-up your game and start recording it with an iOS screen recorder.

No matter the reason, if you want to record screen on iPhone or iPad, you are going to need an iOS screen recorder app. Thus, here we're glad to share with you the top 7 screen recorder for iPhone and iPad, which let you capture your iOS screen without effort.

EaseUS RecExperts is one of the most popular screen recording software worldwide. Coming with an intuitive user interface, it is easy to operate by any user, including the novice without any tech knowledge.

With its aid, you can choose to capture any area on your Windows or Mac screen. Also, it makes it possible to record screen and webcam overlay and audio at the same time in a few simple steps. Whether you want to make a tutorial video, capture live streams, or record game highlights, you can always rely on this program forever!

If you look up a screen recorder for iPhone on the App Store, one of the apps that you are going to come across is Record It. As the name implies, this simple and easy-to-use iOS recording app lets you easily and quickly make screen recordings on your iPhone and iPad.

Besides, the app allows you to add a facecam reaction as well, which helps make your videos more personalized and engaging. It has an option to add audio commentary as well so that your viewers get to know more about your recording. Lastly, there is an inbuilt video editor available to help you edit your recordings. 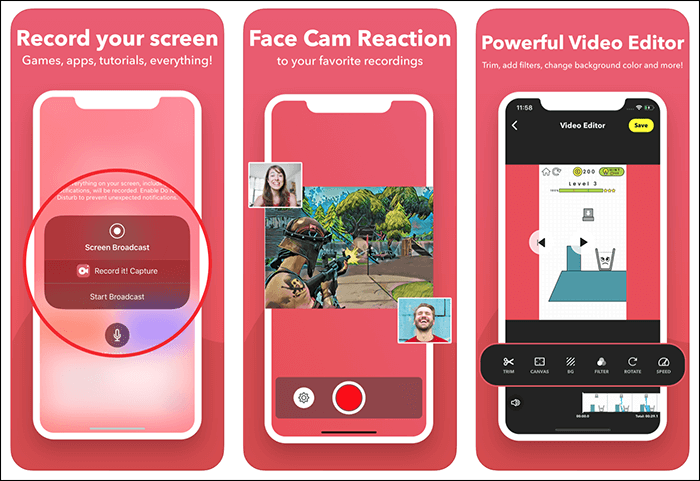 Go Record is yet another iPhone screen recorder app. It is no less in terms of features compared to other similar apps, and you get a bunch of functions to use with screen recordings in this application. You can make recordings in all your apps as well as games, with its help.

Similar to other apps, it allows you to add your own audio to recording using the microphone. Last but not least, it comes with several editing options so you can fine-tune your videos before they go out. 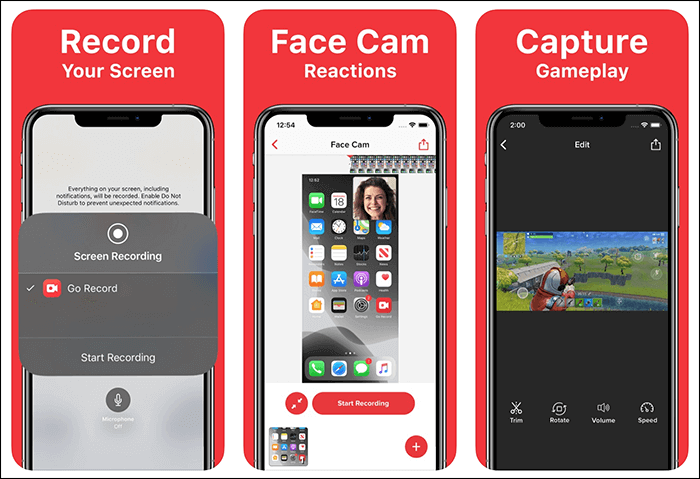 If you want something that is robust and is proven in the market, look no further than TechSmith Capture. This app is actually available for computers as well and you can now use it on your iPhone or iPad to make screen recordings.

Like other iPhone screen recording apps, you just need to install the app, configure various options in it, and you are ready to start recording your device's screen. 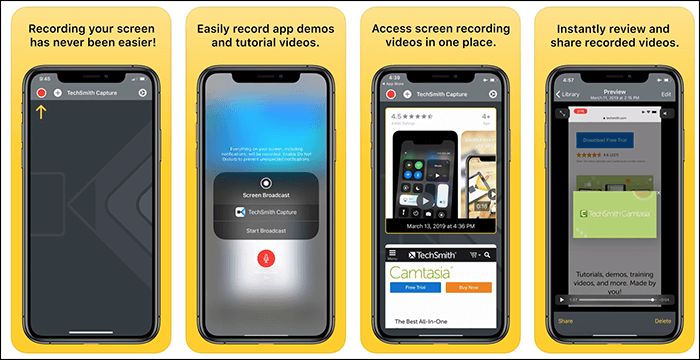 As if that is not enough, the app comes with a video editor, which lets you trim, cut, and apply various editing actions to your screen recordings.

Screen Recorder - AZ Recorder might sound familiar if you have ever recorded a screen on an Android device. This app now is available for iPhone and iPad users.

With this iOS screen recording app, you can easily screen record iPad or iPad with or without a camera. Most importantly, it allows you to configure various options before starting the recording, including resolution, FPS, and orientation.

Display Screen Recorder is built not just to help you record your screen but also to make it easier for you to make recordings as well as share them with other devices. The built-in options allow you to share your recordings via email or AirDrop, and this makes bringing your favorite recordings to your computers easy.

When it comes to recording, you can make full-screen recordings of your iPhone and iPad. You can then change the name of your recordings so you know what video file is for what task. The iPhone screen recorder app offers the option to sort and search your videos so they are easier to find when you need them. 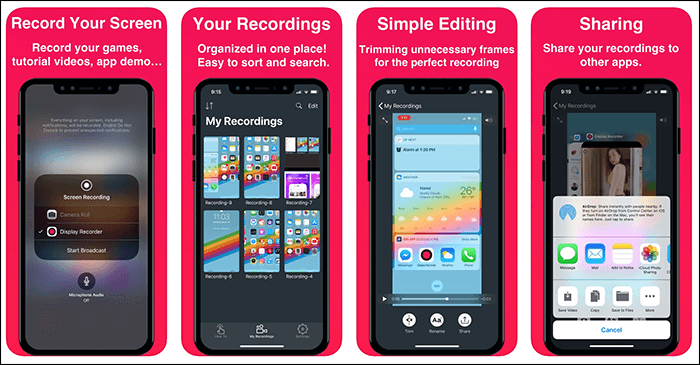 The last screen recorder for iPhone you can download is V Record. It let you hide your recordings once you have made them on your iOS device. If your work involves making screen recordings that are not suitable for others to watch, you can use one of the features in this app to keep your recorded content discreet and secure.

The other options include a video editor that helps trim videos, change the playback speed of your videos, merge your videos, and so on. You can even convert your videos to GIF if you want in this app. 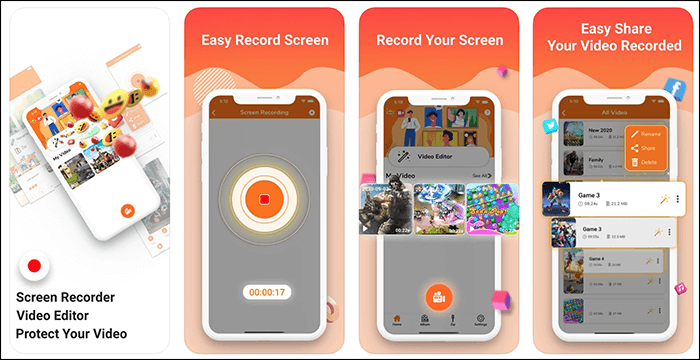 If you need to record your iOS device's screen, use one of the apps suggested above to do that. EaseUS RecExperts is a pretty neat option if you want a quick and easy way to record your Mac or Windows screen.