Which is Better: OBS Studio vs. Streamlabs OBS

With the popularity of live-streaming platforms, more and more people get willing to broadcast live content and share things with others. Before broadcasting the live stream, you should get everything well prepared. For instance, if you want to be a streamer on Twitch, a computer, a microphone, and broadcasting software are all critical. When it comes to broadcasting software, OBS Studio and Streamlabs OBS are the most popular ones. Their functions are different, though their names sound similar.

What are the differences between OBS Studio and Streamlabs Studio? OBS Studio vs. Streamlabs OBS, which is the best one for you? This post will give you the answer.

What is OBS Studio
What is Streamlabs OBS
Is Streamlabs Better Than OBS?
Bonus: Best Way to Record Screen While Streaming

What is OBS Studio

OBS Studio was released as early as 2012, and this open-source software gets famous quickly for its strong ability to capture the screen and broadcast live streaming. As OBS Studio is an open-source app, developers can customize the plugins to add the features of OBS. As everyone has access to its code, the glitches of this software can be solved as soon as possible.

What is Streamlabs OBS

Streamlabs OBS is also known as Slobs. This streaming app is designed on the basis of OBS Studio, but it's usually considered a simplified version of OBS Studio. In late 2022, the name of this software was changed to "Streamlabs" due to the backlash from the open-source live streaming platform OBS Studio. 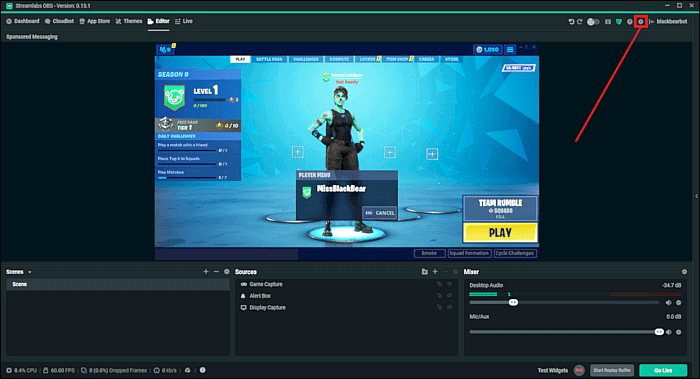 Streamlabs, this upgraded version of OBS Studio, was released in 2018. This software aims at adding more features to help users broadcast live streaming more conveniently and improve the user experience. Compared with OBS Studio, Streamlabs offers many unique tools that will be helpful for streamers, but some people think those new functions are burdensome. Next, this post will compare these two apps from many aspects.

Is Streamlabs Better Than OBS?

You may be interested in this question: Streamlabs OBS vs. OBS Studio, which is the best one? Some people believe that more advanced functions are equal to high quality, while others think that too much functionality will slow down their device. Before concluding, you need to know the differences between OBS and Streamlabs OBS.

In past years, OBS Studio developed its software to ensure it could run on most desktop devices. To be more specific, OBS Studio is compatible with Windows 8 and later versions, macOS 10.13 and later, as well as Linux. On the other hand, Streamlabs even doesn't support macOS ever since its release. If you are using a Linux and macOS device, OBS Studio is your only choice.

As mentioned above, OBS Studio is integrated with fewer features, and it only offers users the primary tools they need in screencasting and live streaming. This characteristic makes it require fewer CPU resources, which is beneficial for users to get a smooth stream. As the broadcasting software, Streamlabs OBS requires better computer performance.

The interface of OBS Studio is more compatible than that of Streamlabs. You can find many elements on it, such as Sources, Scenes, Audio Mixer, etc., and you only need to drag the window of each element to change the layout of the interface. And you can customize the settings freely to make them suitable for your needs. For instance, you can adjust the frame rates, audio channels, and so on. This is an excellent feature for professional users, but beginners perhaps will be confused by its complexity.

On the contrary, Streamlabs offers you a free theme so that you are able to set up the streaming software easily. One of the unique features of Streamlabs is "Auto Optimize," which means this software will scan your Internet speed and hardware performance and then configure the most suitable settings for you. You can access this function by navigating to "Settings" > "General."

OBS Studio and Streamlabs are both popular broadcasting apps, and each of them has its advantages and disadvantages. In conclusion, if you are a Mac or Linux user, OBS Studio is your go-to choice, and for Windows users, these apps are both available. In addition to that, OBS Studio fits professionals most while Streamlabs is more suitable for beginners.

Sometimes you perhaps want to capture your screen during the live streaming and save the video to your PC. In fact, both those two broadcasting apps, but this feature has a high requirement on the computer performance. Taking Streamlabs as an example, you can activate the Task Manager on your computer to check the performance. If the CPU usage is too high, it would be better to adjust the settings.

The customization of settings may take a lot of time, and it isn't delightful. Is there any way to record the screen without effort? Yes. You can record the live streaming easily with EaseUS RecExperts, a lightweight screen recorder that will not slow down your device.

Step 1. Start your Skype and EaseUS RecExperts. Firstly, you need to select a suitable recording area. Click on the "Full Screen" button to capture the whole screen, or click on the "Region" button to record a specific part of your screen.

Step 2. Click on the bottom-left button to customize the sound source. This software offers you multiple options, and it supports recording system audio, microphone audio, or both of them. Then, tap on the "REC" button to start recording.

Step 3. During recording the Skype call, a little toolbar will appear on your screen. The two buttons on the toolbar enable you to pause the recording or stop the recording and save the recorded video to your computer.

Step 4. After saving the captured video clips to your PC, a media player will pop up, and it would help you preview the recordings. A set of built-in tools enables you to trim video/audio files, extract audio from video, and add opening title & ending credits.

This post introduced two of the most famous broadcasting apps one by one and answered a question: Streamlabs OBS vs. OBS Studio, which is the best streaming software? As those two apps have unique features, you need to choose from them per your needs. For example, OBS is better for professional users, while Streamlabs is an excellent choice for beginners.

But they have a common disadvantage: the recording feature may slow down the PC's speed during the streaming. A lightweight screen recorder, such as EaseUS RecExperts, is what you need for capturing the screen smoothly. As it's compatible with both Windows and Mac, you can use it to capture the screen of a Windows PC and a MacBook without effort.