Some of you may see Nvidia Share as nothing but a default recorder of Nvidia graphics cards. As a matter of fact, this game recorder, accompanied by Nvidia Geforce's ability to enhance game performance, is qualified as the best game recorder on the market.

According to the report issued by Steam, from July 2019 to November 2020, the Nvidia graphics card has taken up an 80 percent proportion of Steam users. The statistics revealed an undisputed fact that Nvidia is considered a common choice for gamers.

So today, I am going to find out the reasons why Nvidia is such prevailing. And during the demonstration of this point, instruction for how to record with Nvidia Share will be given.

Nvidia graphics card creates premium recording conditions for its users. Its amazing ability to boost games has things to do with the groundbreaking NVIDIA RTX/DLSS/Reflex technologies that could drastically intensify the performance of 4K games on the market.

Let's use Cyberpunk 2077 as an example, and you can better understand me - with the Nvidia graphics card RTX 3060 Ti or higher, this game appears to be more picturesque with the most absorbing, and realistic scenes presented to gamers.

When your games operate in an excellent performance, there is no doubt that your gameplay recordings will be awesome. This explains why Nvidia Share is considered a premium game recorder - its graphics card runs the best games in the first place!

How to Record Games with Nvidia Screen Recorder

On its floating bar, Nvidia Share offers 3 options to users: Instant Replay, Record, and Broadcast Live. The Instant Replay mode will help users capture the last 5 minutes of their gameplay. And the Record mode is a manual recording mode, which is more convenient for creating long gameplay videos. The third mode - Broadcast Live is designed to help game anchors stream their games to other platforms, and it is not our topic today.

The last step to enable the Nvidia Share: Check and enable it under Settings > General Overlay > In-Game Overlay > Switch on the green button.

How to Record Games with Nvidia Recorder?

The instruction below is all about the manual recording mode. Now follow the simple steps to configure the recorder and create your own game clips with it.

Step 1. Choose the recording mode that suits you
The 'Record' mode is our choice, click on it.

Step 2. Set for recording
To make the final videos look good, there are some options that needed to be set up before recording. You need to pay attention to these parameters especially: video quality, recording length, resolution, FPS, and bit rate. You can also decide whether to add a webcam to your gameplay recording. 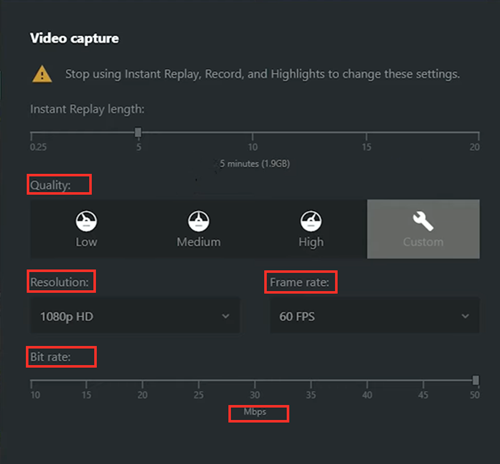 Now you can play your PC games and record them by manually calling out Nvidia Share. When you feel like ending the course, end the recording.

you can upload your gameplay footage onto several social media platforms.

Nvidia Share is a derivative product of the famous Nvidia graphics card. And owing to the graphics card's powerful ability, Nvidia captures the best quality games videos. However, the biggest problem of it is the complicated preparations before recording. And it is restricted by the Nvidia Graphics card, it can't work alone. Also, it is no way to edit the clips after recording. So here I want to recommend the best alternative recorder of Nvidia Share to you.

How to Record Games with Another Competent Game Recorder

EaseUS RecExperts for Windows works with most of the games on the market. The gameplay videos this recorder produced is not stuttering, and also, this game recorder will not cause your games any lags or latency.

Also, you are allowed to take a screenshot, add the webcam, etc. The best part about this best game recording software is its ability to output your videos in various formats. Speaking of format, it is also a GIF recorder, which means that you use it to produce vivid GIF pictures out of your clips. This recorder will be the right choice for you if you don't need the function to broadcast your games, or you are not seeking the ultimate gaming experience.

Now, catch this chance to download it for free!

How to Record Games with this tool on Windows:

Nvidia graphics card impresses gamers with its unparalleled ability to enhance game performance. And as a bundled recorder of this graphics card, it delivers brilliant performance on recording games, too.

Today's post displays details of the Nvidia Share and offers an alternative choice - EaseUS RecExperts. It bears more features that a gamer may need and provides users with simpler procedures to record. Try it now!

What's the requirement of an Nvidia Graphics card for playing 4K games on PC?

How to record games with a webcam using Nvidia Share?

Go to the general overlay > Select the button 'settings' on the In-Game overlay > in the popping-up window, choose HUD layout, and that's where you can add a webcam to your recording.

Can I use the Nvidia Share without the GPU inserted?

I am afraid the answer is negative.