[2022] How to Mirror iPhone/iPad Screen to Mac Efficiently

Viewing an iPhone screen on Mac is a good experience as it shows a bigger display. It's generally used by people who want to make a presentation on a Mac screen or watch a saved video from iPhone. Even playing games on a big screen is a good choice. If you want the same effect, you should cast the screen from the iOS device to Mac.

To cast your whole screen of iOS devices on Mac, you can apply the mirroring function. This post introduces several ways on how to mirror iPhone to Mac using the QuickTime Player and AirPlay. Also, for you to record iPhone screen on Mac, using an effective screen recorder is advised.

How to Cast Screen from iPhone to Mac via QuickTime Player

As an easy-to-use multimedia application, the QuickTime Player is developed by Apple corporation to deal with audio, video, image, etc. It has basic functions like playing movies and music on Mac. Also, it's a functional tool that helps capture audio and record audio on Mac. You can use it to record your microphone sound easily.

Most importantly, this fantastic built-in tool supports you to mirror screens from iOS devices to Mac efficiently. Its high connectivity for iOS devices and Mac helps you maintain good quality when applying this function.

Preparation: In this method, you need a Lightning-to-USB cable for connecting your iOS device with Mac. Also, make sure that your iPhone or iPad is in iOS 8 or above, and your macOS is in OS X Yosemite or later. 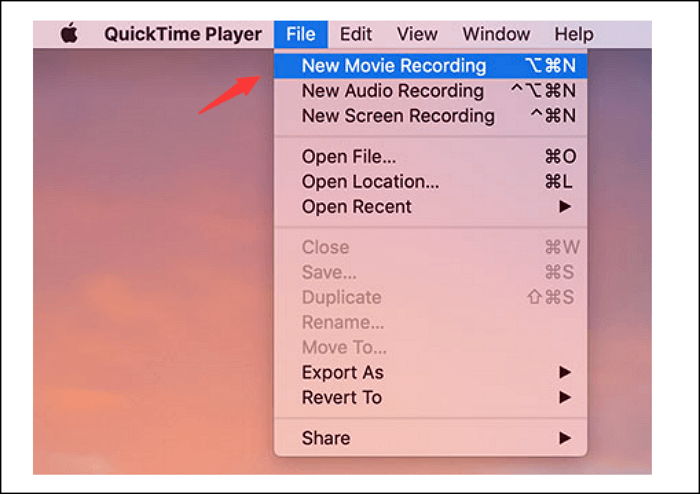 Here are the steps on how to screen mirror iphone to mac:

Step 1. Firstly, use the Lightning-to-USB cable to connect your iOS devices to Mac.

Step 2. Open the QuickTime Player application. Then, click "New Movie Recording" from "File" on the top menu. Find the down arrow next to the red record button, and choose your iOS device to connect it with Mac.

Step 3. Now, your iOS display is completely mirrored on Mac.

Note: After connection, the Photos and iTunes are launched immediately. You need to close that window.

How to Mirror iPhone to Mac with AirPlay

AirPlay is a built-in feature of Apple that allows capturing the screen from iOS devices to an Apple smart TV. Although there is no way to mirror the iOS screen to Mac using AirPlay directly, it's working when applying an AirPlay receiver on Mac.

One recommended AirPlay receiver is Reflector, which receives connections from AirPlay on your devices and helps mirror the screen without wires. Also, this receiver works well when using the latest versions of iOS. Before casting the screen from an iOS device to Mac, you need to prepare as followed.

Preparation: Ensure your iOS devices are updated to the latest version. Also, use the same Wi-Fi connection. 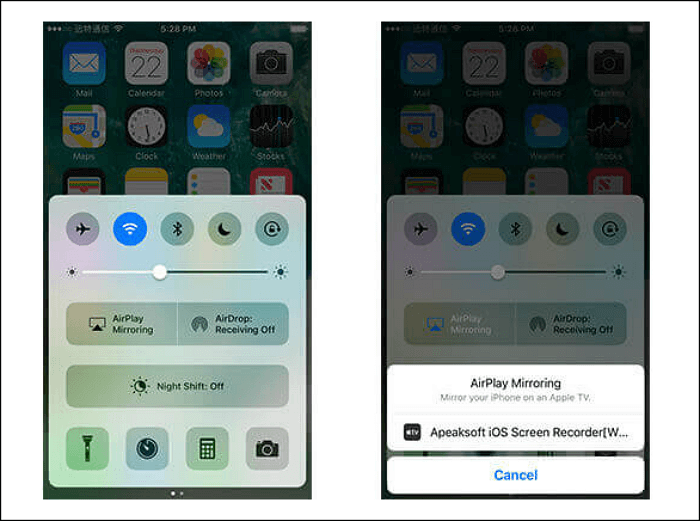 Now, look at the steps on how to mirror iPhone to Mac:

Step 1. Make sure the Reflector is launched on Mac. Then, find the Control Center on your iOS devices. For users with iPhone X or later, swipe down from the top-right of the screen. For the older version, swipe up from the bottom of the screen.

Step 2. In your iPhone or iPad, click "AirPlay" from the Control Center. Then, select your Mac to make a connection.

Step 3. After typing the code on your iPhone, the screen is shown on the Mac.

Bonus Tips: How to Record Screen on Mac

For example, you have more choices for output formats like MOV, MP4, FLV, etc.

Catch this unique chance to try it for free!

Here is a list of steps to show you how to record screen on Mac:

FAQs About Mirroring iPhone to Mac

If you have other issues about how to mirror your iOS screens to Mac, check with this part.

1. How do I mirror my iPhone to my Macbook Pro wirelessly?

If you use iPhone X or above, swipe down from the top-right of your phone. Then, hit the Screen Mirroring function. Wait for a while, and you select the Mac you want to connect with.

2. Why can't I mirror my iPhone to my Macbook?

Enable the Airplay function in your iPhone. Also, you must make sure your iPhone and Mac are connected to the same Wi-Fi network. If it does not work as well, you should restart the device for mirroring again.