When you click on this page, you must have encountered the problem that the BIOS cannot detect the SSD. This article will tell you the reason why the BIOS won't detect SSD, and how to fix this problem.

"I have 1TB storage on an HDD and I have a 240GB storage on an SSD. After I woke up this morning to hop on my PC. I realized I was booting from my HDD. Thinking I knew how to solve the issue, I opened my BIOS settings and went to boot order. My primary boot was my HDD so I tried to change it to my SSD. My SSD wasn't detected in my drives so I was confused. Why can't the BIOS detect my SSD? How to make it be detected again?"

One user had asked this question in an IT forum, wondering why the BIOS won't detect his SSD. In this article, we will focus on this issue to help any other users who encounter the same issue.

Why Can't the BIOS Detect My SSD?

First, we need to figure out the reasons why you can't see the SSD in BIOS. Actually, many factors would lead to such a problem. Below are the most common ones:

If you can't make sure whether the SSD port or the SATA cable is working properly, follow the below guide to have a check.

1. Unplug your SSD, switch to another SSD port and see if it can be detected by BIOS.

2. Unplug the SSD, but keep the SATA cable connected. Then connect an HDD with the same SATA cable to your computer. Power back on and see if the system will boot into Windows. If it will, then you can make sure the SATA cable is well-functioned. You can try other methods to solve the problem.

Step 1. Restart your computer, and press the F2 key after the first screen.

Step 5. Save your changes and restart your computer to enter BIOS. 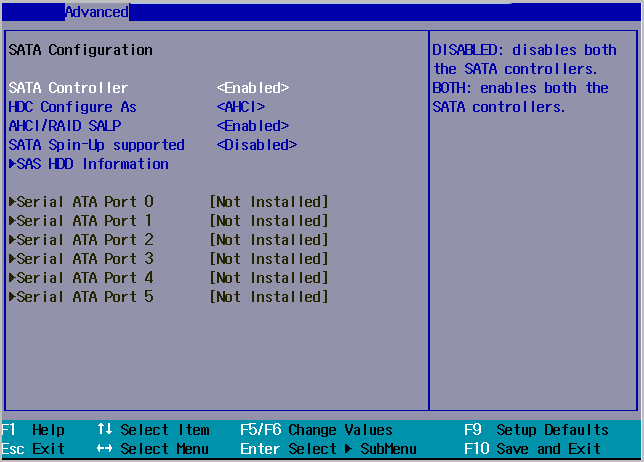 Now you can check if the BIOS can detect your SSD.

Easy fix to SSD not showing up in Windows 10

This tutorial describes four cases of Windows 10 not detecting a new (old) SSD, and you can try to fix the issue accordingly. Download EaseUS Data Recovery Wizard when it's necessary to recover data from an inaccessible/formatted Solid State Drive.

This method only works for the condition that you have two hard disks, and have installed Windows on both of the two disks, but booted with the HDD before. As mentioned above, under this condition, the EFI and boot partitions that existed previously would trick the installer into believing that it does not need to create a new EFI and boot partition. Here is what you should do.

Step 1. Backup the data on your SSD to another safe location.

Step 2. Reinstall Windows over again without that HDD attached to the system.

Step 3. If Windows on the SSD failed to boot, it implies that your computer has an undesirable configuration and should be properly reconfigured as soon as possible.

If any of the above methods won't help, it is suggested you run a series of drive health tests on your SSD, which is recommended by Seagate. If your SSD got corrupted, the only thing you can do is to get a new SSD. Before buying a new one, you should recover the data on the corrupted SSD.

First please check in the Disk Management, if you can see your SSD is detected as RAW partition, you can apply the following method to recover data from the corrupted SSD.

To do this task, you need to seek help from third-party data recovery software. One of the recommended software is EaseUS Data Recovery Wizard. Here is the reason why we pick this software.

That's all about BIOS won't detect SSD. Actually, there are way more than four reasons that would cause SSD detection failure. Once it happens, it is difficult to fix the problem. The only thing we can suggest to avoid further loss is to back up your SSD regularly.