What Is ReFS File System? Everything You Need to Know

What is ReFS File System

Resilient File System (ReFS) is an advanced file system launched by Microsoft, which was launched with Windows Server 2012 in September 2012. In the early days, ReFS could only be used to store data, but now it can boot the system and also be used on mobile hard disks. 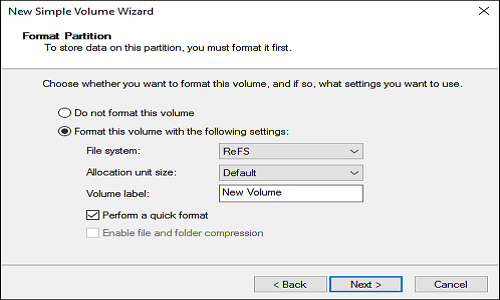 ReFS was initially only used in Windows Server 2012. In October 2013, Microsoft began to add ReFS to the desktop version of Windows 8.1. In the update of 2017, except for Windows 10 Pro for Workstation, the function of creating ReFS volumes in Windows 10 was removed. However, the operating system can still read ReFS volumes.

Microsoft not only uses the NTFS code base to design the ReFS file system but also adds support for Win32 APIs to provide compatibility with existing APIs to support ReFS with more features.

The ReFS file system uses the B+tree structure to manage data through metadata indexing and maintains high compatibility with NTFS. The B+tree structure can support ReFS to store more data using the branch mode and reduce disk I/O to improve performance. On the basis of NTFS, ReFS can maintain higher consistency and data integrity, thus enabling data recovery in case of system errors.

Because the ReFS file system uses the B+tree structure, it can support a large amount of data. Currently, ReFS supports a maximum file size of 16 EB and a maximum volume size of 35 PB.

Without using Check Disk(CHKDSK), ReSF can check files and repair file corruption when users read or write files. In addition, the data integrity scanner will regularly check and repair all files on the drive, which means ReFS has internal flexibility to check whether the file data is damaged, and provides higher integrity and availability for the data.

Although the ReFS file system is highly expected by Microsoft, it cannot be a real substitute for NTFS at present. ReFS has many functions that other file systems do not have, and it also has many shortcomings that need to be improved.

In short, ReFS is an advanced file system launched by Microsoft. With its unique functions, it can effectively help people access, write, modify and protect data easily. But although it has excellent performance, it is still not a perfect substitute for NTFS.