RAM and ROM are two primary components of any computer. So, what exactly is their difference?

Standing for Random Access Memory and Read Only Memory, respectively, RAM and ROM have always been a point of confusion for many computer users. From school days to professional life, many people have pondered exactly the difference between the two.

On top of that, questions regarding to it are common. Questions such as what makes them different and how do each of them work?

So, today we'll look at the key aspects of Random-Access Memory, aka RAM. And we'll also define Read-Only Memory, aka ROM. On top of that, we'll find out the differences between RAM and ROM. So, let's begin.

Random-Access Memory, commonly known as simply RAM, is the primary computer memory type. It allows the device to read data and write it in any order. Its primary work is to ensure a smooth flow of storing work-related data and machine codes.

The primary core of RAM comprises multiplexing and demultiplexing circuits. This allows the tech to converge data streams from one point to another. In other words, It allows a smooth flow of reading and writing entries.

However, modern RAM modules like DDR4 and DDR5 employ IC (integrated circuitry) alongside MOS (Metal-Oxide Semiconductor). These memory cells are volatile, which is usually known as DRAM (Dynamic Random-Access Memory) in the professional technology world.

In other words, every information saved in these memories is removed once the power is lost or unplugged. Therefore, it requires a constant supply of power to be able to store information and pass it on. That's why most motherboards today connect CPUs directly with RAMs. 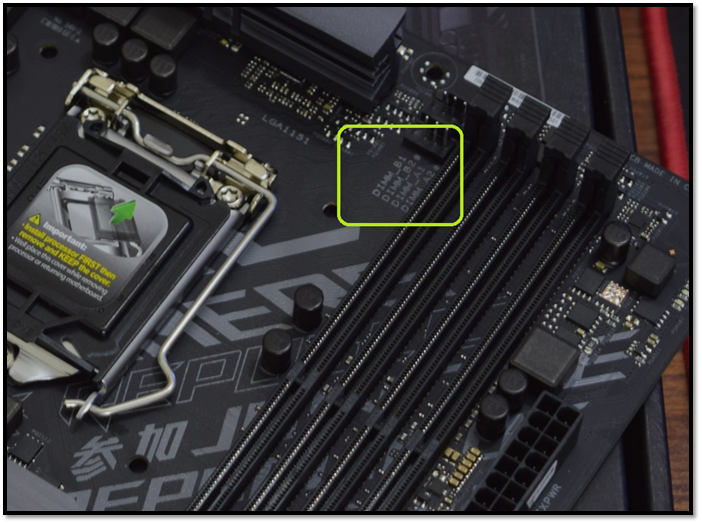 Motherboard indicates which slots to use for direct connection with the CPU, A2, and B2.

While the commercial use of RAM dates back to 1965, when IBM started employing it, commercial(consumer-level) rams became more common after Samsung stepped into the market in 1992.

Nowadays, consumer-level RAMs are known as DDR, which means Double Data Rate Synchronous. Currently, it's on its fifth generation, aka DDR5, but most consumer devices today still employ DDR4.

ROM, or Read-Only Memory, is the non-volatile memory type used in not only computers but various types of electronic devices. ROM is primarily employed in firmware-esque programs and software. In other words, software or programs that rarely ever need any changes or tweaks.

Once again, the tech giant IBM was the innovator, as it employed the first discernable type of ROM called Discrete-Component ROM or DC ROM. Since these devices were Read-Only after the initial write, they were shipped out as such.

That's why one of the first uses of ROMs in consumer-level devices was cartridges that people would plug into their consoles. These ROM cartridges were then read by the devices and allowed the user to play the games stored on them.

After that, CD-ROM became a common commodity in the early and mid-90s. While they're practically extinct at this point, DVDs and other types of ROM storage are still employed to ship out games, movies, etc.

There are countless differences between RAM and ROM. The one on the top will always be the fact that RAM is both readable and writeable. At the same time, ROM literally is the abbreviation of 'Read-Only' Memory. However, that's not where the difference ends.

To help you understand it easily, here are the key differences between the two:

Let's talk about the confusing last point in the table, the read/write speed. RAMS are quick and can easily exceed the clock speeds of 3600-4000Mhz (DDR4 memories) in consumer computers. Whereas DDR5 memories begin at 6000mhz.

While ROM can hold data without power, RAM is usually quicker because it flushes out any data once the power is off. However, today's storage devices employ NAND Flash, which is a type of ROM. Still, it only allows them to store the settings and other information.

RAM is the primary center of any computer operation, including common operations such as browsing, gaming, working, etc.

The pricing of the two is vastly different, and for good reasons. Nowadays, ROM isn't exactly available as a direct purchase. It's used in phones, SSD storage, and other devices such as NAND to store information. Whereas RAM is a pluggable commodity in computers and laptops.

However, RAMs in phones are always soldered to the motherboard. But, since RAM is a much more advanced technology and continues to evolve (currently in its 5th generation), it's a much more preferred type of memory. Therefore, it's priced higher.

Not only did we talk about the definition of RAM, but we also explored the roots of ROM. Then we also differentiated between RAM and ROM. Needless to say, both of the mare vastly different and equally necessary for computers and electronic devices.

While there was never a debate about which one is more important, some casual users still confuse them for one or the other. Therefore, we hope this article helped you settle any doubts or confusion regarding RAM vs. ROM.